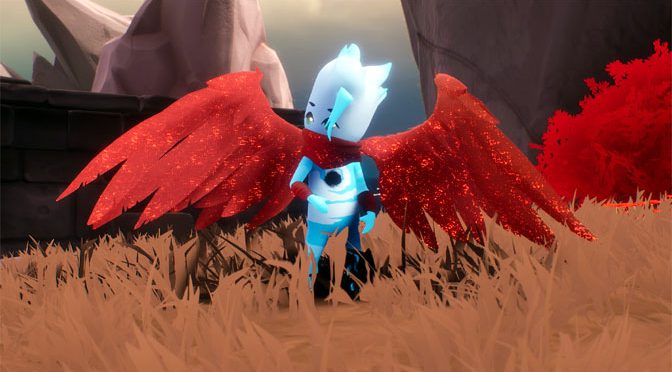 Scarf offers a simple but beautiful platformer with puzzles solved easily enough to keep the game going. While the story feels more like a late addition to the game, it’s lack doesn’t mar the playthrough. If you’re looking for a decent way to spend an afternoon or a game to which you can come back with ease, Scarf may be for you. 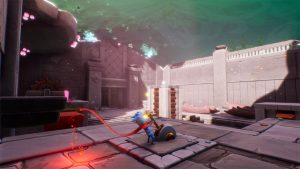 Your character awakens in water, strangely, and floats to the top. You walk on the surface to the water and meet up with a red dragon. The dragon transforms into a red scarf, which happens to complement your amazing arm warmers perfectly, and immediately upon contact, you learn her story. She’s a child whose mother was ripped apart by beings who then used her mother’s “threads” to create portals to other worlds. The dragon chased these beings through the portal but became stuck until a being of light, that’s you, arrived to hear her story.

After that, you’re off to explore the worlds available to you in order to piece together what happened and possibly to revive Scarf’s mother. You’re off to the races, now, and you’ll spend the rest of the game hunting these beings, called Nomads, and collecting Ink shards that unlock narrations by Hyke (that’s your character) revealing bits of the story. You also spend some time feeding Scarf glowing orbs. 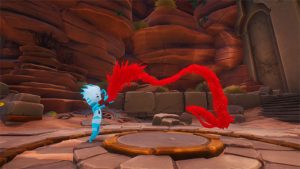 As Hyke progresses through each of these three worlds, you’ll find yourself acquiring new abilities, such as double-jump and glide. If you’ve played a platformer ever in your life, each of these abilities will feel familiar to you. Scarf isn’t seeking to open up new ground here. The puzzles that lie at the heart of the game never really quite pose a challenge, especially as the initial pan over reveals exactly what it is you’ll have to face as you move through the world.

Scarf very obviously borrows from Journey, which isn’t necessarily a bad thing because the borrowing feels more like homage than it does imitation. In fact, the fluttering scarf takes me back to Journey every time, but unlike in that game, the resolution doesn’t quite reach the level of satisfaction one might hope it would. 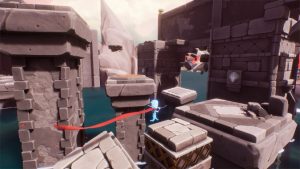 Scarf, is, however, shockingly beautiful. Each of the three worlds has a very specific palette and design that makes it feel distinct from its two other fellows. Even Hyke’s character design is gorgeous, and the black hole where his heart should be teases some of the significance to darkness that you’ll find in each of the nine Inks scattered around the three worlds. The music is similarly gorgeous, with gentle movements that sonically mirror Scarf’s floating in the wind. 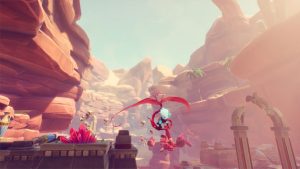 However, once you get over the visuals, Scarf’s flaws become apparent. While you do have the option to skip collecting the Inks, I don’t think you should for two reasons. For the first, you’ll need to collect six of the nine in order to get the “good” or “true” ending, and for the second, while the surrounding story doesn’t necessarily matter to the gameplay, collecting the Inks and deciphering the story renders the experience much richer. Suffice to say, Scarf wants to explore deeper and darker themes than the light, bright visuals would imply. Unfortunately, that lack of emphasis on the story means that Scarf never quite grapples with the issues it poses as effectively as it might, nor does it prepare the player for same. Making that kind of tonal shift requires a deft hand on the part of the writers, and that finesse simply isn’t present here. The cyberpunk-like Transient game I reviewed a few weeks ago spent too much time on story; Scarf spends too little. 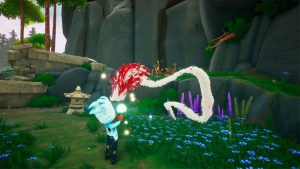 From a sheer mechanic perspective, the rings from which you’re meant to swing via Scarf are incredibly buggy, which is odd, considering how forgiving the rest of the game is. On more than one occasion, I found myself very frustratedly trying to get from one platform to another using a ring that just wouldn’t cooperate. Obviously, the most frustrating part of the entire experience was that it wasn’t the puzzle that caused the issue. I could solve the puzzle easily. The game itself just wouldn’t let me do so. 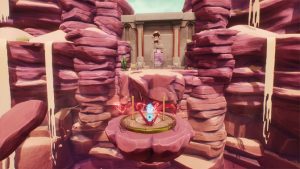 Scarf is an absolutely beautiful platformer, and even though the puzzles don’t really pose much of a challenge, their simplicity doesn’t actually detract from the play experience. If you embrace that Scarf is an exercise in peaceful simplicity, you’ll love the game for its relaxing atmosphere. Unfortunately, the story clearly wants to do more and includes a twist or two that renders the rest of the game uncomfortable in retrospect. To be clear, I very much enjoyed my time with the game, so the few flaws I mention above can be overlooked and don’t really mar the gameplay experience.

Scarf currently retails on Steam for a perfectly reasonable $14.99.