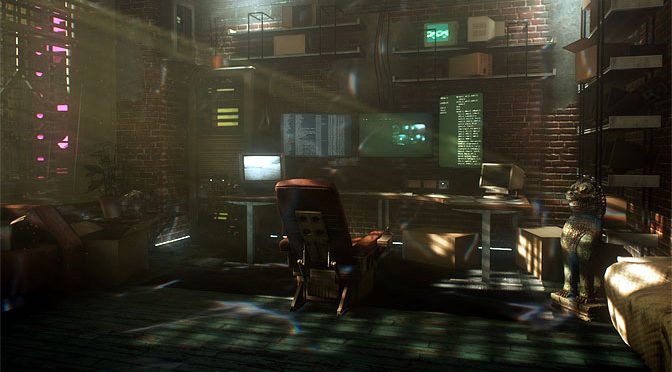 If you’re a fan of storytelling or of Lovecraftian horror, give Transient: Extended Edition a pretty hard look. While short, the game offers a deep, rich story and surprisingly well-thought-out graphics. However, that deep, rich story does not always come across nearly as clearly as it should or would have had the game lasted just a touch longer than it does.

Despite some of the story issues, Transient offers puzzles and the occasional monster to keep your interest as well as developed mini-game mechanic. The game offers a look into an interesting attempt to blend cyberpunk and supernatural horror which is worth experiencing, if only to encourage more developers to play in this particular sandbox. 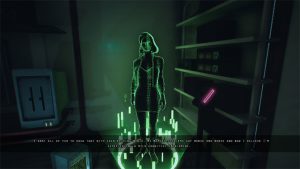 Transient takes place in a post-apocalyptic cyber-punk world, and you play Randolph Carter, who may or may not be based on the character created by H.P. Lovecraft. Carter is a member of a group that investigates the origins of the apocalypse that has left most or all of humanity living in a single, domed city named Providence. Admittedly, while opening the game with an excerpt from a book explaining Providence’s raison d’etre, the initial impression Transient gives is not greatly influenced by cyberpunk. After opening with a loving shot of a skeleton that may or may not be a sculpture, you find Carter being questioned by what appears to be an Ultramarine Primarch from Wish. Carter has apparently discovered how to use his mind to access different locations, which is clearly Call of Cthulhu territory. 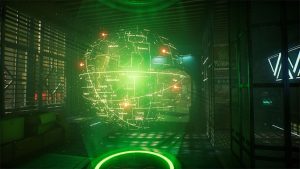 After the heart to heart with the Haloed Horror, Carter wakes up in his apartment, squarely situated in a Blade Runner-esque Cyberpunk world. Carter begins to receive messages from dead compatriots, and you’re off on your investigation. Did I mention there might be eldritch sorcery involved? Must have slipped my mind. 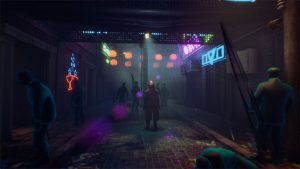 Transient combines the mystical with the technological. In addition to Carter’s strange powers, he uses a Perception Heightening Implant in his brain to scan his surroundings for potential clues that hint at Transient’s complex storyline. In the next breath, Carter uses astral projection with the aid of hallucinogenic potions he crafts in his apartment to reach alien landscapes. Clearly Transient wants to create a bridge between technology and magic, and in some areas, the game succeeds. However, Transient does not always do a great job combining them, so there are moments in the game when the shift feels jarringly unnatural, even given the setting. 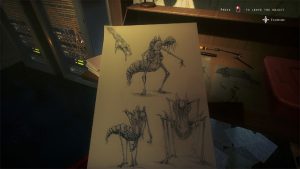 The creature designs embrace Lovecraftian alienness with zeal, so I have to admit that I cared very much for those. They even follow a certain internal logic with respect to movement that I didn’t expect. The more humanoid character models are not good. Randolph Carter especially looks objectively awful, and during a few cut scenes, I found myself wondering idly if humans in the future had decided that bones were an unnecessary evolutionary throwback.

When not exploring the alien worlds, Carter functions mostly by hacking, and that process is fairly straightforward. For example, in one instance, you move a game piece around a board, trying to avoid firewalls. Where you encounter same, you’ll get a password puzzle to solve. Transient’s puzzles are generally pretty straightforward, and if you pay attention to your environment, you’ll know not only that they’re coming but how to solve them. That said, there were a few moments when I found myself stuck at a door because my own attention had lapsed. 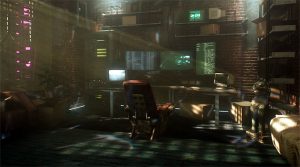 Transient does offer two full mini-games, one clearly inspired by System Shock and one that clearly has its genesis in Alone in the Dark. Of the two, I preferred Eryx over Eldritch because failing Eldritch means you had to start it all over from the beginning. That said, the mini-games really were my least favorite part of the entire game, but while they can be a touch annoying, they aren’t insurmountable. 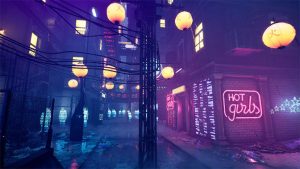 Transient favors its story development above everything else, meaning that you’ll see gameplay mechanics sacrificed or dropped in order to further the story. Mostly, the practical effect of this is that Transient’s gameplay remains simple. You do a lot of walking, and outside of a few action sequences, you’re mostly investigating. Personally, that aspect of the game did not bother me, but some of the tasks do become repetitive. That repetition, which in a much longer game, would not detract from the experience because there’s enough time separation between the repeated tasks that your perception of the repetition has shifted. There’s no such separation in Transient with its 3.5-4 hours of gameplay. That said, Transient does a good job of using its alien worlds well, and you get the chance to explore more of the hauntingly well-realized spaces than you might expect in such a short game. 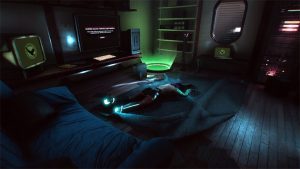 Visually, Transient is beautiful, Randolph Carter’s character model notwithstanding. Each setting has its own palette, visual style, and feel. The game’s shadows are fascinating, and I loved the use of color in Providence. The soundtrack is perfectly atmospheric, keeping the experience immersive by heightening the tension as you play. Transient does not use jump scares, so you needn’t worry about them, if that kind of mechanic bothers you. The horror stems from the psychological and thematic aspects of the game. The game also acknowledges its roots in Lovecraft’s mythos with key texts and collectibles calling back to Lovecraft’s oeuvre. Ostensibly, the game borrows most heavily from that universe, but some of the game’s most interesting elements center directly around themes of transhumanism. I would have loved to have seen some callbacks to the cyberpunk classics that similarly float around in Transient’s DNA, but I’ll take what I can get.

If you’re a fan of Lovecraft, then you definitely need to check out Transient because the Easter Eggs are enough entertainment alone to keep you occupied. However, if you’re looking for a game with complex gameplay, difficult puzzles, and deep choices, Transient will not be for you. While Transient is a short game, it is one that is difficult to pick up and put down in short increments, especially considering how many plot elements you have to remember and possibly synthesize into some sort of cohesive whole. 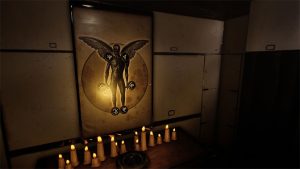 That said, the game does channel its Lovecraftian roots in that the actual story is a snarl of half-revealed truths and vague intimations of horror. The ending is therefore far less important than the journey there, so if you’re looking for cut-and-dried closure, you aren’t going to get it. Be aware of that going into Transient. There’s not much real stopping and starting with the minigames, and unfortunately, they are necessary. I’m generally not a fan of mandatory minigames because my gameplay time is so limited, and Transient did not change my stance on that.

Transient is a game with an interesting premise that struggles a little in the execution, and honestly, if that’s not the perfect Lovecraftian homage, I don’t know what is. Overall, the game works for me, but your mileage may vary. You can purchase Transient’s Extended version on Steam, where it retails for $19.99.