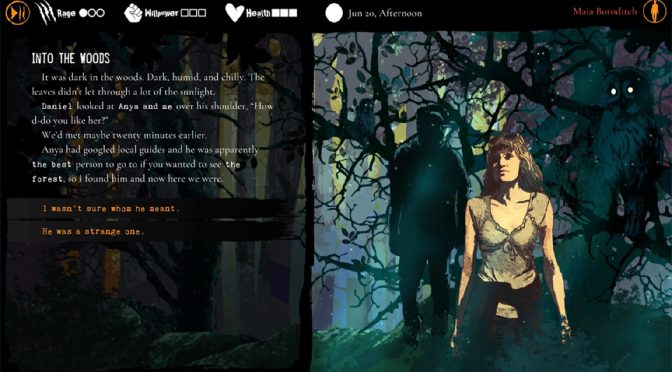 Werewolf: The Apocalypse
— Heart of the Forest

Greetings and Salutations gamer fans! It’s another great Saturday with yours truly! I hope everyone had a great New Years’ holiday and plan to try something cool and new. Which is what we’re all about. Speaking about new and cool, My husband and I were finally able to move into our skoolie, aka a bus conversion. I’ll have to give y’all the grand tour later.

What’s up for today’s review? It’s an oldie turned into a new goodie. It’s called Werewolf: The Apocalypse — Heart of the Forest. My husband was the one who suggested this one, as it just came out on the Nintendo Switch. 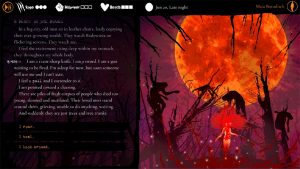 You might recognize this one, because chief editor John Breeden, an avid pen and paper RPGer, recently reviewed the game on the PC through Steam. You can find his perspective and review right here.

So what makes this an oldie into something brand new? The oldie part is that pen and paper developer White Wolf came out with a D&D-style book style called Werewolf the Apocalypse. I was in love with the concept of werewolves at the time and loved the idea of playing that kind of game as opposed to regular D&D. But I just ended up collecting books with no one to play with, which was fine with me. 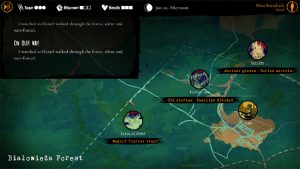 White Wolf also came out with a similar thing for vampires and if I remember right you could mix the two games and make your own mixed games, something our editor talks about in his review. Vampire the Masquerade was so popular though it received a few classic playable PC games, most notably Vampire: The Masquerade: Bloodlines. And more recently we got games like Coteries of New York and Shadows of New York, plus a text adventure, Night Road. Now Werewolf the Apocalypse has a chance to be played. But not in the same way as Masquerade. Who brought Werewolf the Apocalypse to video gaming? Wanderlust studios. They do a lot of games like this. So if you’re a fan of what they do this is another great game to add them to the collection.

Werewolf: The Apocalypse — Heart of the Forest is for anyone who wants a one on one old school style D&D season but has no one to play with. But what I really like about Werewolf is that you can play it by yourself if you want to. You have a personal Dungeon Master (storyteller) in the game. Totally great for introverts, and it’s safe to play. But this is nothing like playing in a 3D world. You instead are given a story to read and are given decisions to make. This is great if you want something where you can let your imagination run wild. The game gives you still art to help you out with some basic stuff. So in short, this is a reading game. But in turn, it gives you the full experience of what it’s like to play the game old school style. 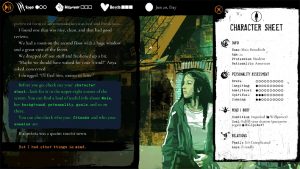 In D&D normally you roll dice or in some online RPGs, they roll the dice for you to randomly select your stats. Werewolf Rage doesn’t do that. It gives you stats based on the decisions you make in the introductory part of the game. You have three main stats which are: Health, Stamina, and Rage. Rage is what helps you change into a werewolf form. One of the things to consider is that you’re going through a sort of werewolf puberty.

When I played my character, I started out with a journey to another country to find out about my character’s ancestors. My stats were decided in my “dream.” I can’t say the same thing will happen for each of you when you play. When you make your decisions, the algorithm will pick something different based on how you react to some situations. 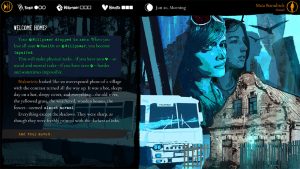 In fact, Werewolf: The Apocalypse really reminds me of Mass Effect in the decision department. There are so many outcomes. But I really enjoyed it. If you are into this kind of game or a fan of any of White Wolf’s stuff, this is definitely a must.

That’s it for now game fans! Don’t forget we’re also going to start live-streaming games sometime soon. So keep checking back from time to time. Also to see more of what Modern Gamer does in her off time check out linktr.ee/delerias