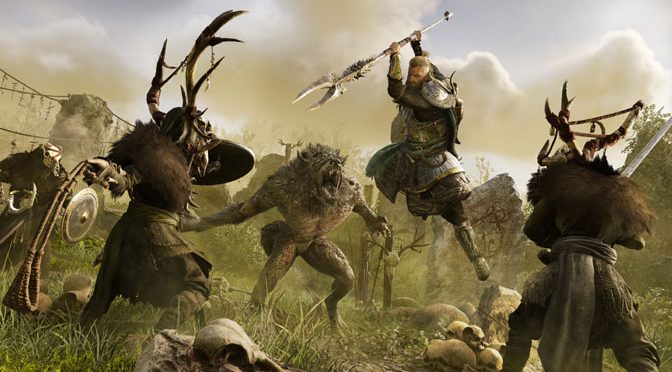 Like our official GiN reviewer Matt Jones, who looked at the core game when it was first released, I love Assassin’s Creed Valhalla. There is so much to do in this largely open-world game that I can literally hop in my longboat and sail in almost any direction to find some interesting adventure. And almost none of it seems like a grind because the various quests are so varied, and often sprinkled with some role-playing opportunities besides. Plus the rewards are pretty generous. Sure, it might be tough to chase that flying paper through the streets of a Viking or Saxon village, but you get a new tattoo for a successful effort which I of course immediately ink up. 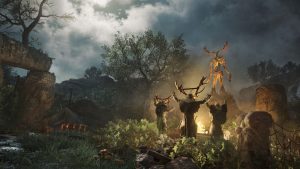 So there I was building up Ravensthorpe back in England and carefully placing statues of Odin, firepits and pretty trees, plus raiding monasteries so that I could improve major buildings. I even built the mystic’s hut and was treated to an entirely new adventure where I played as Odin and interacted with Thor, Loki and the rest of the Norse god gang. So I was not hurting for content. But then I got a letter from my long-lost cousin Barid asking me to come to Ireland. And he’s family, so I hopped on a boat and set sail. Don’t worry about Ravensthorpe, as it will be perfectly fine while you are gone. 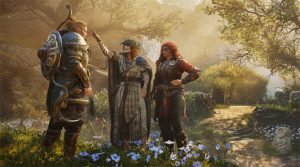 Barid is a king in Ireland, though not the high king. He rules over Dublin, which is a backwater town when you first begin your adventures, though you will help him change that. The Wrath of the Druids DLC takes place in Ireland, which is a completely different map from England. It’s bigger than Norway but not nearly as large as England. One thing that is pretty striking is how they made Ireland look unique from England. It’s not as different as the look between Norway and England but does seem a lot more green than the main map, with more flowers and a more colorful, firefly filled background in many places. The people also seem friendlier, but that may just be me. Like the other maps in the game, Ireland is filled with historical landmarks like the Giant’s Causeway, Tara Hill, Black Pig’s Dyke, Ben Bulben and more. 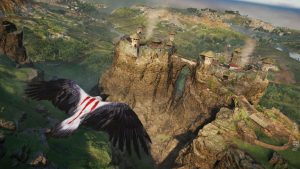 Unlike England, Ireland’s territories are all set at the same level of difficulty, so you don’t have to worry about crossing a river or some imaginary line and suddenly running into challenges that are hundreds of levels above you. The base game is set at level 55 and you must have completed one of the first narrative arcs, either Grantebridgescire or Ledecestrescire to go there. If you are a higher level than 55, then Ireland will scale with you so that you always have a good challenge while adventuring.

The core gameplay of Wrath of the Druids involves going on story missions for Barid, who is trying to earn favor from the new High-King of Ireland, Flann Sinna. You do this by uniting the warring factions of the island by both earning favors from the various kings or sometimes warring with or for them. The main story is quite interesting and of course involves the druids, notably the ancient druidic cult, the Children of Danu, who serve as the main adversaries in the DLC. 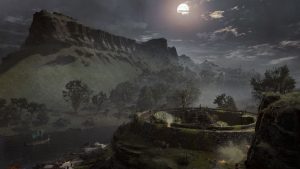 But there is a lot more to it than just the main plot. Developer Ubisoft Bordeaux has really expanded the settlement growth options as you strive to increase Dublin’s prestige for your cousin. You do this using a really fun trade interface that reminds me a lot of Assassin’s Creed Black Flag and their shipping missions, but it’s even better than that. 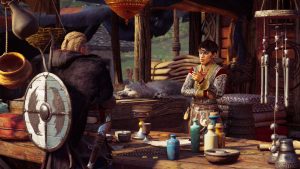 You work with a new character named Azar, who is from the Middle East. She helps walk you through all the trade missions. Basically, you must find overrun or abandoned trading posts throughout Ireland and then take them over by defeating the bandits who live there and then often questing to find the deed to the settlement. Once you do, you can work to improve each trade post (using supplies from raided monasteries) so they will produce more of their specialty goods for you. Each post produces something different, be it dyed clothing, ale and mead, luxury goods or texts. They deposit so many of each good every minute into your trade chest back in Dublin, where you can pick them up when you are in town. 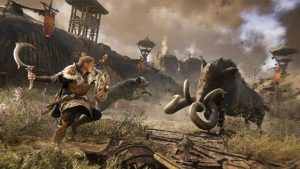 Once you have those goods, Azar will show you various trade contracts around the world, so Egypt might want 30 pieces of clothing and 10 luxury goods for example. Meeting a contract improves the renown of Dublin, but also sometimes provides great rewards like new exotic weapons and armor or cosmetic items. This way, you feel good about helping out Dublin and your cousin, but also earn personal rewards in a way that Ravensthorpe never really offered. 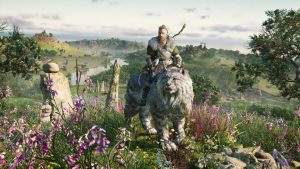 And to top it all off, there is a wealth of new abilities like the Viking Salute, the Smoke Bomb Arrow, Irish Hound Summoning, and the Sickle Combo. And I love the new cosmetic choices too which can be earned or bought for your longship, horse, settlement or raven. My longship is now painted gold with a horse and chariot rider as the mascot. There are also new tattoo and hair styles, as well as the aforementioned new weapons and armor. 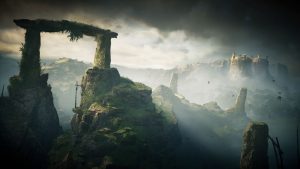 Diving into Gaelic myths and folklore is a ton of fun, and the Assassin’s Creed Valhalla, Wrath of the Druids DLC does just about everything right. I was worried about leaving England at first for my Irish adventure, but now I almost don’t want to leave it. The Wrath DLC provides new activities, new lore, more role-playing and lots of new challenges without getting away from what makes the core game so addicting and fun. It’s just about everything you could ever want in a DLC from a fantastic core game.