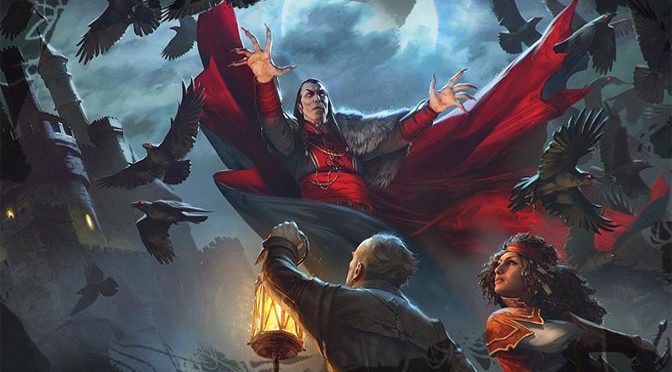 Horror has always been a favorite genre for lots of players, myself included. Some of the most memorable Dungeons and Dragons games that I have either run or played in have been horror-themed in one way or another. But doing horror right takes a lot of work. The new Van Richten’s Guide to Ravenloft supplement for the Dungeons and Dragons game system aims to take a lot of the guesswork or trial and error out of creating a successful horror themed campaign. This is in addition to providing one of the most intriguing and detailed looks at the Ravenloft campaign setting ever made with new monsters, powers, domains of dread, darklords, campaign settings and adventures. 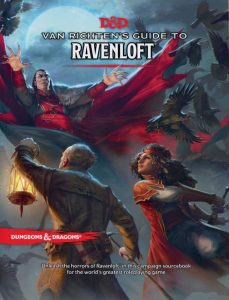 Most people are probably going to buy Van Richten’s Guide to Ravenloft for the descriptions of the new domains of dread. And if that is why you are getting this book, then you will be very happy. The new domains of dread are incredibly fascinating and highly detailed, going far beyond the ones included in the original Ravenloft campaign books from a couple decades ago. Yes, Barovia and its classic master, the vampire Strahd von Zarovich are included, though you probably want to pick up the Curse of Strahd supplement from 2016 which was written with the help of original authors Tracy and Laura Hickman if you want to set a full campaign there.

Strahd is great, and I’ve run that campaign more than once for appreciative groups over the years, but he’s just one example of horror, in this case classic Gothic horror. Van Richten’s Guide to Ravenloft brings a lot more to the gaming table, which is good because it can help to align an adventure with the specific horror preferences of your own role-playing group.

Like disaster horror? Then Falkovnia is the realm for you, where a hoard of zombies rises every full moon to attack the last bastion of humans desperately holding out inside their fortress (while also being terrorized by their own commander who serves as the realm’s dark lord.) How about creepy body horror? Then visit Lamordia, where the twisted desires of the land’s well-educated scientists and surgeons have turned them into cruel butchers of the helpless population. How about slasher horror? If that’s the case, then the life and death games played in Valachan might get your heart pumping, if something doesn’t cut it out first.

Using the guide, you could drop your characters into a domain of dread almost like a side adventure, or even have a domain drop in on them. Or you could set up an entire campaign set in the realms, with your characters traveling through the mists from place to place trying to help the people of these cursed realms, or simply trying to escape the dark power’s grasp. There is even a guide to making player characters that come from the realms, which certainly would put a unique perspective on the world if that is all they have ever known. Just discovering that there is life outside of their home’s dark realm would be quite a revelation.

So if you are looking for a great horror campaign setting, you will easily find it in Van Richten’s Guide to Ravenloft. But the supplement really dives into the nature of a horror campaign and why players find it enjoyable. I admit, having run many horror games before, I was kind of disinterested in this part of the guide, until I remembered my first fumbling attempts at horror. I kind of had to learn as I went, and made lots of mistakes along the way. My group was very forgiving, but I wish I had something like this guide to give me a few pointers.

Van Richten’s Guide to Ravenloft breaks horror down into different genres and explains the positives and potential negatives of setting a campaign in those areas. This includes body horror, cosmic horror, dark fantasy, folk horror, ghost stories, gothic horror, disaster horror, detective stories, psychological horror and the slasher genre. Adventure hooks and game ideas are given for each genre so that you can create a game with those elements without having to rely on a specific domain of dread from Ravenloft. Of course there are great domains to go along with each of these genres, but the guide gives you everything you need to make your own path. Talking with your players and discovering the kind of horror they enjoy might also lead to a better overall experience, as the guide points out.

Another thing the guide does is talk about how horror gaming can be different from standard Dungeon and Dragons adventures. You are putting your players into a scary situation, and some players may have trouble with that kind of vulnerability. The guide gives some tips on how to deal with that to make sure that everyone has a good time.

Rounding out Van Richten’s Guide to Ravenloft are new powers and even new character classes that fit in well with the horror genre. For example, the Survivor character class envisions a normal person who somehow survived a horrible situation. They have some interesting powers like the ability to slip away from a dangerous situation or to get divine guidance in a tragedy. They are designed so that they can be pre-rolled and given to players so that they can experience horror from a non-adventurer type of perspective.

New monsters include some really diabolical ones like a creepy doll called a carionette that tries to swap its captured soul with its unsuspecting owner so that it can go exploring the world. There are also floating undead heads, a swarm of zombies all mashed together, and a powerful Jason-like slasher killer. Trust me, some of these monsters will scare even your veteran horror gamers.

There is also an adventure called The House of Lament which serves to introduce horror gaming to a group of players (and maybe game masters) who have never done horror before. It has all the elements of a good horror game, including a séance (with a method of acting that out using a spirit board), a haunted house and some expert help to steer things along. Hopefully, this adventure will hook your group on horror gaming, because if done right, it can be so much fun. The House of Lament adventure should set things on that path with its step by step guide.

Van Richten’s Guide to Ravenloft is simply the best Dungeons and Dragons supplement to be released in years. There is something for everyone here. Those dipping a toe into the dark waters of horror gaming get plenty of tips and help making that plunge, while veterans will find a swarm of activities and adventures to challenge even seasoned players – and maybe even give your players a brand new thrill.