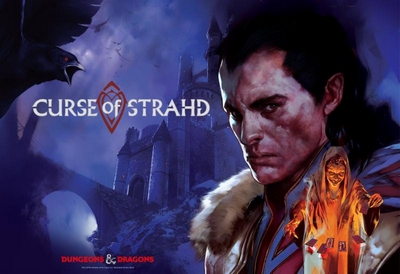 Wizards of the Coast today announced the newest Dungeons & Dragons adventure, Curse of Strahd, is now widely available at retail stores around the country! Designed for fifth edition of the D&D tabletop roleplaying game, Curse of Strahd is a new gothic horror-themed adventure set in the cursed land of Barovia, including the iconic Castle Ravenloft. The new release was written in collaboration with Tracy and Laura Hickman, the authors of the original Ravenloft adventure.

In addition to Curse of Strahd, there are many other opportunities for D&D fans to experience Ravenloft, including:

Dice, Camera, Action! Tune-in and watch Dungeons & Dragons Principal Story Designer, Chris Perkins, guide a party of prominent YouTube and Twitch D&D players through Curse of Strahd live. The adventure began on Twitch on March 8th, but you can catch up with past episodes on YouTube.