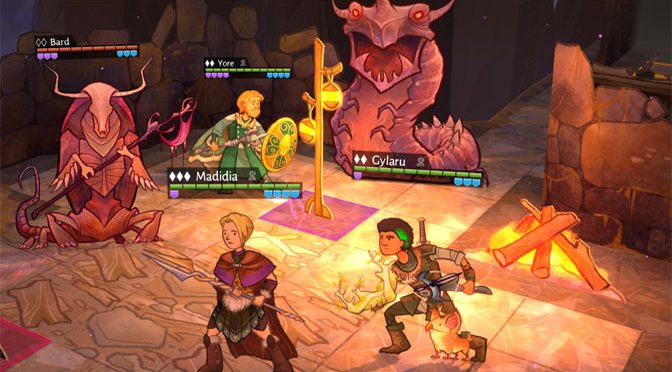 Many JRPGs begin with characters in humble beginnings, whom, through no fault of their own, oftentimes wind up felling a god by the end of the game’s run time. In contrast, Western RPGs tend to be much more grounded in their plot escalation, though you have interesting cases where you go from, “Generic Sci-fi Soldier #11” to, “I’m Commander Shepard, and this is my favorite universal apocalypse on the Citadel.” A lot of WRPGs tend to present choices to the player as you adventure, but many of them are purely superficial (later Bioware games were especially bad about this). Wildermyth actually acts upon the pretense that choices matter in a procedurally generated RPG, and sometimes your choices may come back to haunt you much later. So is the goodness of Wildermyth a myth? Let’s find out. 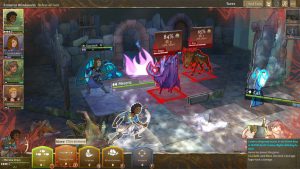 There are five story campaigns in Wildermyth, in which there is an overarching plot line that gets sprinkled with random events that can cause different things to happen much later in the game. For the most part, however, you’ll create your initial squad of three characters, and they’ll eventually all band together to stop monsters that are appearing all over the countryside, for example. Even the procedurally generated campaign seems almost natural in execution, creating memorable moments from event to event. One thing I quickly discovered is that Hanna-Barbera cartoon characters are easily recreated in Wildermyth, so my initial party of Fred, the warrior, Shaggy, the hunter, and Velma, the mystic, worked quite well for some time. You can customize almost everything about the characters that join you, as well. 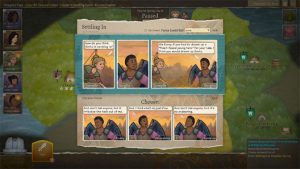 The stories of Wildermyth are told across a large number of days via a procedural map that you use to move your characters from one location to another, to scout for enemies, equipment, and townspeople in need of rescuing that will provide you with valuable items that you can use to craft your weapons and items. As the game goes on, you will likely need to start splitting up your party to cover more and more of the continent and actually get things done before a big wave of enemies appears. Monsters are always attempting an incursion of your territories, and they get stronger via a calamity system that helps the monsters keep up with your growth, either through players spending time inefficiently, or by making repeated poor choices that affect the world, itself. 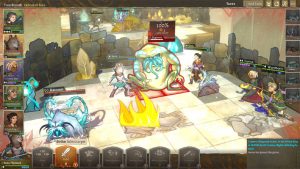 Combat in Wildermyth is very similar to many other turn-based strategy RPGs out there, as a lot of its inspiration seems to have been Dungeons and Dragons. During the player phase, you can select your characters and move them around the board, attack, or use special skills and abilities to buff, debuff, interact with terrain, and more. Each character has a specific number of actions that can be used per turn, and while attacking will usually end your turn (without a skill or buff applied that gets around that), you can spend attack actions to move twice as far, or forego moving to enchant some brush, set it on fire, and then fling that fire at an enemy to damage multiple foes simultaneously. Once you start getting new abilities unlocked in Wildermyth, the combat system opens up substantially, and you’ll be buffing, debuffing, creating difficult terrain to reduce enemy movement speed, etc., while cutting swaths through demonic beast hordes by hitting them with trees and bookcases. 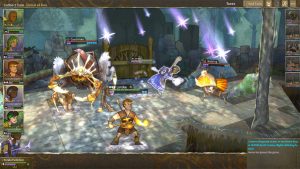 For the most part, anything you can do to enemies, they can do to you, also. You can flank enemies to reduce how effective their armor is, and foes can do the same to your party. The ability to debilitate targets with status effects means that doing more than just flinging damage is viable, which is nice considering most of the abilities your characters can acquire on level up tend to have additional effects that allow you to more adequately control the battlefield. Time is of the essence, of course: In Wildermyth, your characters age due to the passage of time. Once a character gets too old, they’ll retire, leaving you to train up the next generation to complement your battle strategy. The warrior class retires the earliest, next being hunter, and mystic being the class that retires the latest of the three (they have a healthy diet of books, who could blame them for hanging on until Medicare age?). 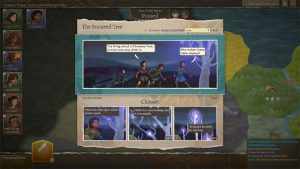 Every system in Wildermyth is at least above average, but what really gives the game its capacity for a homerun are its events, where your choices can have lasting consequences. The combat is effectively not any different from other turn-based games, as it’s about as engaging and balanced as Crimson Shroud, though you don’t have the sheer plethora of options that a game like Divinity Original Sin 2 provides. The events- random occurrences that could potentially have lasting impacts on your game, and many of them are linked to personality traits of the characters you create. The traits themselves each give the characters dialogue or choices that make sense for the given situation, and in different runs of the campaign you may even stumble across the same event, but due to having different personality types in your party, you’re presented with completely different options to resolve how to eliminate a curse, free an ancient, evil vulture god, or even just prepare defenses.

However, basing events off of personality traits while having multiple campaigns means that if players consistently pick the same types of characters to begin each run of the game, then your likelihood of running into the exact same events will skyrocket (so I recommend trying all new characters when moving from one campaign to another). 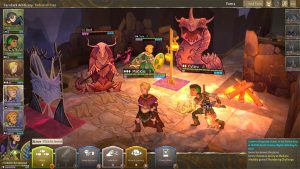 The story bits are told through these comic panel-like scenes, though the repercussions from them won’t just stay within the context of the story dialogues. In one campaign you may find a statue and elect to put a frog head on it, and get turned into a frog yourself, but in another you may come across that same event and place the ram head on the statue instead, and the majestic ram appears in a later combat encounter to help you. Different things can happen, but it’s the events that really pull you to keep playing, because big riches or even lost limbs can be found at the click of a button, and the gamble is extremely interesting because some events can even be referenced by characters later, in other campaigns! 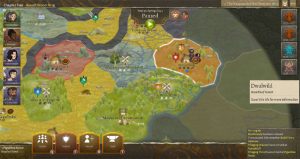 Speaking of losing limbs, a character whose health hits 0 doesn’t immediately die- you can choose for them to lose a random body part and have permanently reduced health, or they can sacrifice themselves to buff your allies. A character that loses their non-dominant hand might not be able to wield a shield or two-handed weapon any longer, for example, but they’re still available and can contribute to your future causes. If that same character falls to 0 HP again in the same chapter, no choice is given, however; they just die. Wildermyth isn’t quite as brutal with loss of a character as games like earlier Fire Emblems are, but mortal choices do present their own unique dynamic in the event that you’re playing for the first time and an enemy takes you by surprise by waltzing right up to you and knocking out on of your guys in one hit. 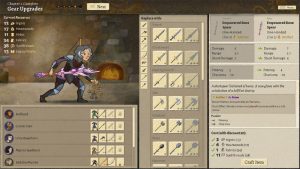 One of the last things to mention would probably be the visuals of Wildermyth, which are crafted precisely to look like a kind of pop up children’s book. Flora sways back and forth but obviously is made of paper, and revealing new objects or foes during fog of war will have them spring to life as if they’re cutouts in a book- it’s absolutely pleasant. The music complements the visuals well, with bright, bouncy fantasy themes that back up the picture book visuals. 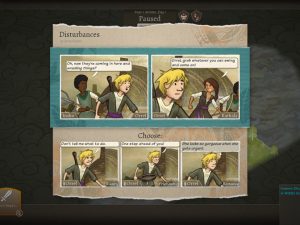 Overall, Wildermyth is one of those games that I’d easily recommend to someone who enjoys Dungeons and Dragons, or strong storytelling in turn-based strategy RPGs. There’s a large number of ways to build your characters, such as debilitating foes one by one, creating choke points with a spear-wielding warrior who makes opportunity attacks at every passing foe, full-screen nuking with a mystic, or piercing shots from a hunter. There are so many options, not just with your characters, but in how you affect the story events, that everyone should be able to close Wildermyth with a story of some kind to tell by the end of a campaign or two. Players wanting a more action-packed experience likely won’t enjoy Wildermyth, but for those who appreciate turn-based games, Wildermyth offers a lot at a very low price point.