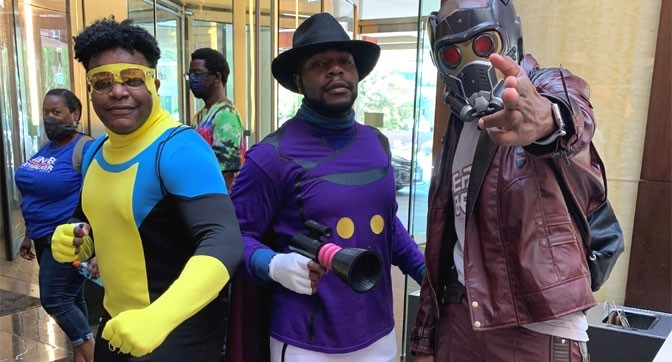 Blerdcon 2021, a portmanteau of Black Nerd Convention, recently showed how conventions can deal with the reality of a pandemic. Blerdcon was held in the Washington, DC Metropolitan Area, specifically Arlington, Virginia at the Crystal City Hyatt. It demonstrated its deep community roots by the many local organizations and volunteers who supported it. 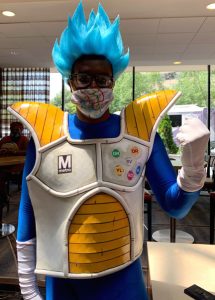 One cosplayer even had an outfit that showed the DC Metro train system, complete with matching mask. It seems like all of DC was ready to come out and enjoy life again, if in a little bit of a subdued setting.

The concept behind this convention is laid out on its webpage. “Blerdcon is an event that highlights and celebrates Blerd culture and creates a marketplace of ideas where sharing that culture can take place with proper context, attribution and positivity in an inclusive environment.”

To attend the convention this year you needed to bring a physical CDC vaccination card and a photo id that matched it. You were then given a Blerdcon Mask and a wrist bracelet. Despite these requirements, it was packed. It was great to see people together enjoying themselves despite the past few years.

If you love videogames, then this was the place to be. There were large areas where you could play classic video games and consoles with large screens for new video games. ALL GAMEPLAY WAS FREE!!! This part of the show was sponsored by MAGfest, with much of the classic games provided by the organization Vidyadade. Vidyadade, made a special announcement about Blerdcon thanking John-Charles Holmes for making their flyer.

The panels were amazing this year! The convention organizers really went all out in their return, having had to cancel the fun last year due to COVID. To name just a few of the great panels: “Black Girl Magic: Black Girls DO Game!”, “Teaching History Through Lovecraft Country and Other Speculative Fiction,” “K-Dramas: Watch Responsibly,” and “Getting More Black Creatives in the Gaming Industry” which was presented by the DC Gaming Group.

When I went to attend the last panel, I got there early and caught the previous one about K-Drama (Korean Dramas filmed in Southern Korea). Presented by three members of blackgirlscreate.org including PORSHÈA PATTERSON-HURST, Delia Gallegos and Constance Gibbs. The obvious love that the three had for this world-wide phenomenon coupled with their audience participation made for a very fun time.

Black Girls Create hosted other panels and is known for a scope of content creation, including writing and pop culture critiques.

The last panel promoted by DC Gaming Group, was also very in-depth and offered good advice for those who wanted to work in the gaming field.

The DC Gaming Group worked hard to put on a great panel. I was able to talk to two of its members, Kevon Eaglin and Kreston Shirley. COVID-19 had cut into many of their usual in-person events, so they had expanded the use of their Discord Channel over the past year.

They were both excited to have put together a panel of four video game professionals including Austin Branion, Bri Williams, Sean Mason and Che Rose. All had interesting backgrounds and great advice.

For those exploring the game industry, the panel highlighted the importance of making and maintaining connections and to always be improving one’s skills. Austin Branion pointed out that Unity.com had free and low-cost downloadable programs to create your own games. Sean Mason highlighted using YouTube and gdcvault.com for tutorials in making games. All endorse using your local library. A library card can give you access to LinkedIn learning that also has programs on video game programming.

Bri Williams, a computer game narrative designer, related many of the challenges that exist in the gaming industry. Che Rose talked about his work with young students to expose them to opportunities in video games. All local video game heroes, the three of them had attended American University, which offers degrees in Video Game Design.

There were not just video games at Blerdcon but also Table Top Roleplaying Games. Last time we covered Blerdcon Roll20 had hosted a great event. Just like in our last articles on Blerdcon the Hyatt was instrumental in setting up the space for rolling dice.

Overseeing many of the D&D games was Eric Menge. He works with Wizards of the Coast Adventures League. He ran countless games of packed tables for both experienced players and those trying them out for the first time. I sat in on a session and Menge made those who were new to the game at feel totally at ease.

In the end, Blerdcon 2021 was a roaring success. As usual, the organizers and volunteers overcame many challenges, including COVID-19, and put on a great and unique show that was obviously loved by the community. It will no doubt be even bigger next year.