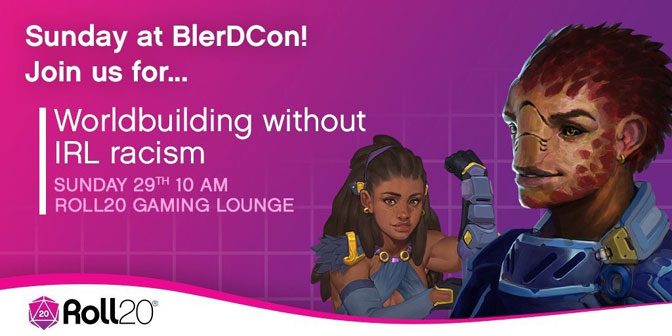 I, like many others, found out about the fast growing fandom event Blerdcon by a promotional email from Roll20, the browser based virtual tabletop for Roll Playing Games. In this email it stated:

“First up on the Roll20 tour is Blerdcon, just outside Washington, DC on July 27-29! Blerdcon brings together thousands of people from all walks of life to celebrate our amazing culture of games, anime, comics, and more! Roll20 will be hosting several panels at Blerdcon as well as sponsoring the Roll20 Tabletop Gaming Lounge!”

I looked it up, and learned that Blerdcon, the portmanteau contraction of Black Nerd Convention, was being held in Arlington, VA, just four miles from Washington DC.

At the Opening Ceremonies Hilton George, the creator and Co-Chair of Blerdcon said this Con was focused on highlighting people of color, LGBTQ, women and those with disabilities active in nerd culture such as anime, cosplay, gaming, comics, fantasy and sci-fi. Hilton George talked about growing up in North Carolina during the 80’s and 90’s, where there wasn’t a geek scene for a young black kid like himself. He loved comic book collecting and Dungeons and Dragons, but didn’t have much of an outlet.

“Last year Blerdcon sold 1,600 tickets, this year there were more than that in pre-sales!” he declared.

There was so much in Blerdcon and it was so complex that there will three articles on it. I am doing two and guest writer Ron Williams will do one.

The first will be of Roll20’s sponsorship of Blerdcon and the four panels they ran, along with Adventure’s League

The second will be the various panels about video games at Blerdcon, specifically those of the first and third day.

Ron Williams will do the second day panels.

I got to interview Soraya Een Hajji, the Roll20 Brand Manager and Montel Thompson the Blerdcon Tabletop Coordinator.

Soraya talked about how Kristen Carlson, Roll20 Q&A Manager, had come last year and AK, Roll20’s Entertainment Manager had worked hard on the project. She had high praise on their work for this event along with Ceejay Bacchus.

Montel Thompson was very upbeat and happy with how the busy Tabletop Room was running. “My first tabletop RPG was Gamma World. The sci-fi setting was interesting and I got to play an alien. I later went into the Navy and didn’t get a chance to play for years. I bought D&D books and read them but couldn’t find a group to join.”

Montel pointed out the many people who had been playing in the room. “Roll20 has been great and we partnered with Dungeon and Dragon’s Adventure League to run some games and we’ve gotten many new players.”

“This is only the second one (Blerdcon) and it’s a very well-run Convention,” stated Soraya. “Anything we’ve needed they got. We’ve gotten great response from people who haven’t ever used Roll20 and great feedback!” Soraya talked the panels Roll20 were offering like Playing Tabletop Games, Diversifying your Table, How Not to Be THAT GM and Worldbuilding without IRL Racism. 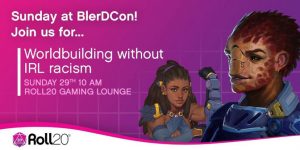 The last panel had two members of Roll20’s A.K. and CeeJay Bacchus along with Tanya DePass the founder and director of I Need Diverse Games and cast member for Wizards of the Coast “Rivals of Waterdeep.” It gave the downside of using the Drow in a D&D setting and how to not use the same, “sand means Middle Eastern people.” In the audience were many who asked questions about how to use Roll20 and advice on Worldbuilding from the professional content creators.

Roll20 also gave a tutorial on their service, which started in 2012. It is free to use, and support any RPGs and has 3.5 million users. It also uses a Quantum Roller for dice rolls which they boast are,  “based on the fluctuations in the power of a beam of light.” Which is about as random as you can make an electronic result.

But no matter how random these on-line dice rolls are, there was nothing chancy about the Blerdcon and Roll20 sponsorship. It was both successful and fun for this and other convention goers.