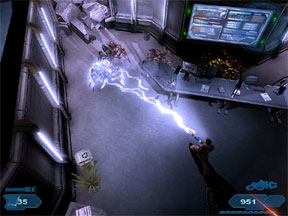 Based on recent movies and computer games, I don’t think I ever want to have a job on a planet outside Earth. Nothing good ever happens out there. Mars has certainly been a favorite topic, and now even Ganymede, a moon of Jupiter, seems unsafe. But still, all this planet hopping makes a fertile ground for computer games, especially shooters.

Shadowgrounds is a bit of a throwback to days when your character was viewed through a top down window. On the one hand it feels a bit odd given that almost all shooters these days are either first or third person in the view, but on the other it makes you remember why you liked games like this when they were popular. If you ever played the well-liked Crusader game, then you will have a good feel for how Shawodgrounds works.

Graphically, the game is quite good despite the older interface, or some might argue because of it. Everything in the 3D world you are walking around in is rendered extremely well. And a lot of the world is breakable too. So if you think shooting out a window might let you get around a roadblock in a hallway, give it a try. Even if your new path does not go anywhere, you will at least get the comforting feeling that you have shattered that evil glass panel beyond recognition.

The lighting effects are particularly good and quite scary sometimes. Later in the game you will run into various colored lights and also atmospheric effects that are really first-class. Sometimes you will need to creep into darkened offices where the power has been turned off, or the lights broken. Then you take out your trusty flashlight and pierce the darkness. Unlike DOOM 3, you can actually shoot and use the flashlight at the same time, so when something crosses in front of the light, blast it!

At one point in the game, you even find a futuristic disco hall with lots of flashing lights and of course, lots of monsters. At that point though, I figured the developers were just showing off. Still, it was a fun mini-level.

You start out playing Shadowgrounds as mechanic Wesley Tyler. He is in a darkened garage on Ganymede fixing a broken down military vehicle. Your boss is a typical jerk, and is screaming on the intercom for you. At this point you take control of Wesley, though you don’t have to rush right over and see what is stuck in your boss’s crawl. You quickly learn that the controls are extremely easy to learn. Just point the way you want to go using the arrow keys, or turn yourself using the mouse. Eventually you will also learn to left click to fire or right click to use something. Pretty much those are the main keys you will need, at least that is how I configured them. It’s nice to find an engaging game where you don’t have to memorize a ton of combos.

Eventually you do have to talk to your boss, who berates you and tells you to take a team over to the power station because the lights are off and some of the 8,000 colonists in your little city are starting to get nervous.

It’s really great how the game gets started. You meet a few people on Tylor’s team and are off to fix the power. You learn that Tylor has some training as a security expert, but a mistake on the job busted him back down to mechanic. But he knows his way around weapons, which will come into play very soon. Anyway, Ganymede seems to have an atmosphere now thanks to the wonders of science, but is almost always dark. Your team enters the power plant while you kick around outside, fixing the transformers.

Once you get them fixed, your team tells you the meters are all green inside, but then you lose contact with them. Venturing inside, you find the place overrun with small spiders, and your team members gone.

Eventually you learn that the little spiders grow up to be big ones, and other disgusting creatures that seem to be pouring out onto the surface. Your team has been killed, and you are lucky to find a pistol to defend yourself. Popping off rounds, you need to clear a path and escape the death trap.

Of course you quickly learn that the entire planet is in danger, and because of your training, suddenly the military thinks whatever you did before to get fired was not so bad after all. The first part of the game finds you alone, upgrading your weapons and just trying to survive. Eventually however, you will meet other people and even travel with them for a while. Most other characters have some means to defend themselves, so having them along helps out by putting some extra firepower in your party.

There is an interesting upgrade system in the game for your weapons. Every gun from the shotgun to the pistol to the flame thrower can be upgraded by spending upgrade modules. However, you have to pick and choose what weapons to improve, since there never seems to be enough modules lying around. Do you want to make your pistol (with its unlimited ammo) more powerful, or enlarge the tank on your flamethrower so you don’t have to reload as often? These choices can be made according to your play style, which helps improve the game experience greatly. I generally saved my points until I found a weapon I really liked, then improved it. Of course upgrading the pistol is also smart, because you don’t have to worry about ammo.

The levels are well designed. It’s very creepy to move around the darkened station and see all the dead people the aliens ravaged. Over time you will find some colonists and can work to save people, which is a nice little reward.

Levels also have some puzzle elements. This is no Myst type of title, but if you play smartly you can save yourself a lot of pain. For example, you can flood a greenhouse with pesticides, which kills all the monsters inside, then vent the room and walk through it normally. You could go in and waste a bunch of ammo and risk your life, but why? Figuring out little things like that helps out a lot. Even getting a clear field of fire on some explosive barrels and waiting for a big nasty to come by will greatly help over time.

At the end of each level there is some type of boss. Some are pretty straight forward where you have to move around and find out how to damage the huge monster. Others are more interesting, like defending a compound from a rush of invaders. In the latter, you are given a little time to set up automatic turret guns at strategic locations, al la Aliens style.

Shadowgrounds is a good shooter and a fun distraction. It’s being sold for less than $30 currently, and for the money, you can’t really find a better value or get more bang for your buck – sorry about that pun. Another advantage is that it seems to run smoothly on lower-end systems. It ran great on a non-gaming PC with a 1.5GHz processor and Intel integrated graphics. So if you are looking to eek out a bit more fun out of an aging system, Shadowgrounds has got your magic bullet.

In the end, Shadowgrounds is a solid title that will remind you of the good old days of top-down action games, only with ramped up graphics and sound that even a modest system should be able to handle. So perhaps Ganymede is not such a bad place to visit after all?