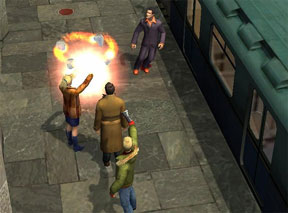 Night Watch is based on the Russian movie of the same name, which was one of the most popular flicks there last year. After spending some time with the fascinating game, I immediately added the movie to my Blockbuster queue. Once it arrived I discovered that the game and movie are quite similar, but the game follows a completely different plot, though with some of the same characters.

The plot of both the game and the movie are that there are groups of people born aligned with either the dark or the light that have been fighting each other for hundreds of years unseen by normal humans. After nearly bringing the world to an end, they decided to form a truce that prevents open warfare, though apparently allows scheming and subterfuge.

A police force from the light side called Night Watch keeps tabs on the dark ones while the dark police are called Day Watch. There is also an overall force called The Inquisition that is aligned to nobody and watches everyone, policing the police. The Inquisition is not present in the movie, but is a useful addition to the game since it keeps both sides from total warfare.

The movie is sort of like a Russian version of The Matrix. People who are aligned with either the dark or the light side have special powers. Dark side people tend to be vampires or sorcerers. Light side people also cast magic, and some can turn into different animal shapes. In the movie each person has a unique set of powers, though in the game this is simplified into three classes. The whole good versus evil thing reminded me a bit of Star Wars and the battles between good and evil Jedi.

For the game, your character is born aligned to the light but unaware of it. The dark forces figure this out and try to trick you into becoming one of them, one of the first light aligned people to ever begin working for the wrong side. Thankfully, Night Watch comes to the rescue and helps you develop your powers and start working for the good guys.

The game and the movie takes place in modern day Russia. You can play one of three character classes. The sorcerer can turn normal items like florescent light bulbs into energy weapons like a sword which can harm dark ones. The sorcerer can also charge ordinary flashlight bulbs into killing weapons, allowing you to shoot beams of light that singe dark ones. This weapon is in both the movie and the game.

The mage is a traditional spell caster throwing fireballs and zapping foes. It is a lot more powerful than the sorcerer natively, though the mage can’t make all the fun toys that the sorcerer can. Still, the game is probably a bit easier to play for a mage than a sorcerer.

And the shapeshifter can turn into a tiger to rip enemies apart. In the movie there were also shapeshifting bears, though in the game its just tigers for the light and werewolves for the dark.

As you progress, you will be able to learn new spells or abilities for your character. Those around you in your party will also grow in power as you do.

You walk around the various snowy Russian landscapes in real time with a top-down interface, but drop into turn based combat when you encounter an enemy. For two groups with a supposed truce, you get into combat a lot. All character actions and map commands are controlled by the mouse, so it’s extremely easy to learn and play.

In combat, every character can step into the gloom, which is a sort of grey twilight realm that exists parallel to our own where neither the light nor darkness has sway. Since you are invisible and invulnerable to the outside world inside (but can attack out of) the gloom, fights with normal humans are easy. But the gloom will kill you if you stay in it too long, and dark ones can easily step inside to battle. So enter cautiously. The game really defines the gloom whereas the movie kind of brushed over it.

There are a lot of tactical options which keeps the game fun, and the landscapes look good, though it’s Moscow in winter, which can make even the gloom look cheery. Seemingly impossible fights can be won by making the best use of your spells, the environment, the gloom, and your items. You can even use mundane weapons if you want, because a well-placed 9mm bullet will silence an enemy witch sometimes as well as a fireball.

The only real problem I have with the game is that the constant fighting can become a bit monotonous over time. If you really like turn-based combat you will be in heaven, but if you are lukewarm to the idea, then you probably will need to take a lot of breaks, especially in the end stages of the game where combat is nearly constant.

Night Watch comes from Russia with love, includes several clips from the movie, and is well made enough that it could gain a large following here as well.