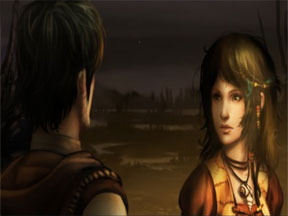 The Dark Eye: Chains of Satinav

I actually thought that The Dark Eye: Chains of Satinav would be an RPG, given that it’s based on one of the most popular pen and paper RPG systems in Europe. But instead I was treated to an old school point and click adventure game. And it reminded me why I used to love them so much.

The story is an interesting one. You play Geron, the son of the bird catcher in town, and thus by default the up-and-coming bird catcher. Apparently the profession does not get too much respect to begin with, and Geron is also looked-down upon because of a curse that follows him. Bad things happen when he is around, to the point that townspeople look down on him for both being of a lower class and also because of his unlucky curse.

That all changes when a bunch of black crows attack the town. Not only do the birds spell bad news for a pending diplomatic visit from your country’s chief rival, but people say the birds are bringing them terrible nightmares. You might have guessed where this is going. It’s up to the bird catcher to set things right, though you quickly find out just how over your head you are.

Graphically, the game looks beautiful, better than almost any game of the same type that I can remember. Everything looks hand-drawn and the world is internally consistent. The graphics tend to be more realistic than cartoon-like, and even little touches like having NPC mouths sync up pretty good with what they are saying adds professionalism.

In fact, The Dark Eye looks pretty great no matter where you are in the world. From dark caves to towns to everything in-between, looking at the world is a real treat. Just finding a new screen gives its own visual feast.

Gameplay is difficult, but adventure titles like this tend to border on being puzzle games, so this is expected. Almost all of the solutions to puzzles and problems in the game make sense. There were not many puzzles that left me scratching my head at their logic, or that required a walk-through to get past.

Since this isn’t a hidden object game, though there are some elements of that, you can hold down the space bar to see hotspots that are clickable. You can then choose to either look at something or try to interact with it. In addition to those actions, Geron also has some minor magic powers. It’s alluded to at first that he might be a sorcerer, but the school of magic refused to train him, being a poor bird-catcher and everything. Still, he can shatter objects with his mind, though they have to be pretty fragile. This works its way into a few puzzles, though not as much as I thought it would.

In terms of sound, the one thing that everyone will probably notice is the quality of the voice acting, which is very good. Even somewhat minor characters talk like they should. And thankfully, the main characters are all very good at what they do. Since you spend a lot of time with them, its great that they aren’t annoying, which happens with games like this more often than it should. No worries with The Dark Eye though.

The music is also good for a medieval soundtrack. It mostly stays in the background and out of the way, but does its part to help set the mood.

I found The Dark Eye: Chains of Satinav to be a bit of a challenge. I admit I’m not the best player of games like this. My lack of patience is mostly to blame. But here I found that if I really thought about a riddle and looked around at the various hotspots, that the solution would eventually come to me. And I got a really good feeling when my plans came together. So I would think that there is enough challenge here for veteran gamers of this genre, but it’s not too difficult for those of lower skills like myself.

In the end, playing The Dark Eye: Chains of Satinav was a lot of fun, and reminded me of those carefree days of yesteryear when adventure gaming was all the rage. It earns 4 GiN Gems for what will probably be a treasure trove of awards.