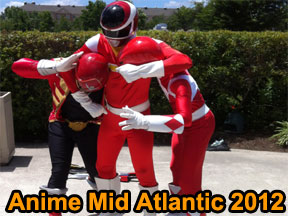 Anime Mid Atlantic turned out to be something of a mixed bag. On the plus side, the con is situated in a single convention center with some overflow panels located in a nearby Marriott, meaning that the con is more or less self-contained, focusing the energy of the congoers in one area. That resulted in some entertaining phenomena’including discussion groups taking up residence under a tree outside the convention areas and a dance-party immediately outside the con entrance, which set a tone of youthful exuberance as soon as one entered.

Unfortunately, there were only three panel rooms, drastically limiting the number and variety of panels that AMA could offer. AMA did a good job of keeping the energy up during the entire con period. Between the panels it did offer, and the larger acts presented on, the Main Events Stage. And there was usually enough going on to keep congoers entertained between trips to a fairly well-stocked dealers’ room.

In terms of vendors, the dealers’ room lacked some of the more familiar and important anime outlets. Funimation, in particular, was conspicuously absent, no doubt due to the con’s comparative size. However, despite those gaps, the vendors that were present offered a wide array of items for sale, including leather goods suitable for Renfaire use and posters, but of the most interest was a surprisingly vibrant market in Japanese trading figures including some older and rarer figures such as Macross Frontier character figures and veritechs.

Costumes were a pleasant surprise. AMA features both the traditional masquerade and hall costume contest, but unique to the con is a ‘Fan Favorite,’ which allows attendees to vote for costumes that may or may not be the most well-crafted costumes but certainly have that certain ‘cool’ factor that sometimes does not get recognized in the more formal judging formats.

The masquerade was well-attended and had a number of surprisingly good costumes including a beautifully sculpted Voltron. The gentleman who constructed that costume built in a pulley system whereby he was able to manipulate the lion arms, and he included a ventilation system so that he was able to wear the costume for long periods of time.

Similarly impressive was a Renji Abarai and Ichigo pair from Bleach. They assembled Renji’s Zanpakuto from air conditioning duct tubing, added LED lights, and managed to stabilize the ten feet of sword the pair of them lugged onto the masquerade stage. Video game costumes were also represented, with a gorgeous Lightning cosplayed by Firelily (www.firelilycosplay.com) and a fabulous Miles Edgeworth by RubyCosmos (http://rubycosmos.wordpress.com/).

AMA also featured a beautifully run console game room. GPX Gaming (http://www.gpxgaming.net/) provided a clean, well-run space in which players could participate in tournaments or just wander in for a game of Dance Central or any of a number of other popular titles. Consoles included their own earphones, reducing the ambient cacophony of sound that seems to dominate some gaming areas, so GPX Gaming was able to offer a space much more conducive to gameplay.

While there was plenty to like about AMA, there was plenty to dislike as well. The Masquerade and Hall Costume Contests were unusually small, even considering the size of the convention, and the previous panel had to be cut short for the Masquerade to go onstage in time. I cannot comment on the panels that were offered or the materials received by attendees because I never saw any, a fact which is telling in itself.

Additionally, very few of the rooms had schedules posted outside, which is often useful for scheduling purposes. Communication between con departments seemed to be more sporadic than it should have been, and the overall functioning of the con suffered a bit for it.

I have no doubt that the people behind AMA 2012 love this con and love anime. However, investing some time and intellectual capital in smoothing over the con’s logistical issues would go a very long way in improving the AMA experience and making it a centerpiece of the con circuit.