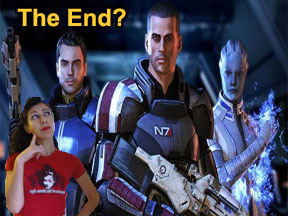 So it’s finally over. The Mass Effect 3 saga has been laid to rest with the release of the extended ending DLC. BioWare were on the receiving end of a mass outcry from gamers, as a result of the incomprehensible finale to the sprawling Mass Effect narrative. Fans protested and demanded a proper ending and BioWare agreed. Months after finishing the game, we’re being treated to an extended ending, but is it enough to satisfy fans?

My first criticism is the on-going confusion that EA and BioWare seem intent on causing. The website said you have to access a save known as ‘legend,’ which will take you back to before the Attack the Cerberus Base mission. I didn’t have that save, which left me wondering how far back I’d have to go to initiate the DLC.

I didn’t relish the prospect of playing from the Cerberus mission, as that’s a good few hours from the end of the game and would mean completing that hellish three Banshees and five Brutes battle again. Internet forums had contradicting advice, so they were no help. I just sparked up the last autosave from my endgame and restarted the final Earth mission, set the difficulty to narrative and jumped right in. I don’t think I missed any extra content, but anyone wanting the ‘best’ ending will have to access from before the Cerberus mission for their readiness rating to be factored in ‘ I think.

So I played through to the end, trawled through all that tedious dialogue with the weird godchild and made my decision. Well, I’m just glad that the DLC was free, that’s all I can say.

Don’t expect to feel like BioWare has made it all better because they haven’t. That said, they have made a valiant effort. Fans were angered on several different levels and BioWare has addressed some of those issues.

The original ending had more plot holes than you could shake a stick at. For one, just how did your squad make it from the foot of the Citadel to the Normandy with Joker, only to land on an island paradise? Okay, so while the paradise bit is still a bit of a mystery, there is a neat bit of extra footage, which explains how your love interest and squad mate are saved. So thumbs up for BioWare there.

My one major gripe is that the endings are all largely the same. I’ve played one and watched the rest. The same CG footage is used for every ending with a different colour wash of light to indicate your choice. Each ending gets a final scene, which generally uses a series of stills and a poignant bit of narration to fill in the last bit of the story.

The extended cut does give us a new choice on top of the original Destroy, Synthesis and Control endings. Shepard can now choose Refusal, which means she doesn’t use the crucible and all life is destroyed. However, we are left with a beacon of hope with a message from Liara to future beings.

Other than Refusal, all the endings are so similar it renders them sort of pointless. And all the fuss that’s made over trying to get the ‘best’ ending (Synthesis) is wasted energy. This is the ending BioWare seems to want you to take. In a weird twist of science, Shepard creates a new DNA, which joins synthetics and organics together. Everyone’s eyes turn green and it’s all a bit spooky. Although they want you to feel like this is the hippy dippy, happy ever after ending, I can’t help thinking that this is the least satisfying outcome, as everyone seems like a mindless, green glowing drone. Isn’t what we were trying to avoid for three games long?

For the record, I chose Control, which is also the ending I originally went for. However, this time around it felt like a much more rewarding decision. The epilogue allays my fears of Shepard turning into a Reaper-controlling monster. The final voiceover explains how the new controller entity has all of Shepard’s memories and becomes a guardian for future generations, helping to rebuild what was destroyed. In terms of this DLC, that’s as good as I’m going to get.

As far as the Indoctrination Theory goes ‘ that’s all fan pie-in-the-sky. As theories go, it was pretty out there and I wasn’t really convinced, but BioWare might have been able to make it work, in a Christopher Nolan kind of mind-melding way. Ultimately, the fans came up with a better ending idea than BioWare did, which is a bit of a shame.

The extended ending does provide a modicum of satisfaction, but not enough to make it feel as if it’s your ending to the way you played the game. I guess that’s a pretty big ask. We all believed the hype, which could only lead to disappointment. Play the DLC, enjoy it for what it is and move on.

On a positive note, playing through the last mission again reminded me why I love the Mass Effect series. Okay, so the first ending was sloppy. Okay, so the DLC should have been part of the actual game. This was a major fuster cluck on BioWare’s part, but for all the hours of epic space opera I’ve enjoyed, I’m willing to forgive them. It’s time to say RIP to Shepard and look forward to Mass Effect the Next Generation.