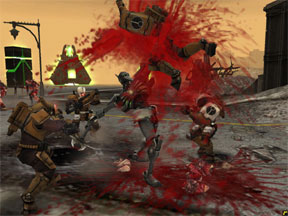 From the miniatures map to your computer, Dawn of War: Dark Crusade brings the action, humor and bloody conflict of the Warhammer 40,000 universe right to your PC.

Dark Crusade is actually the sequel to the Dawn of War game and the Winter Assault Expansion pack, but does not require that you own the original game to play. This is a smart move considering the original game is about two years old at this point.

Personally, I played the tabletop miniatures combat game the title is based on a couple times in college, though I was not really into it like a lot of people were. As such, I only hesitantly started playing Dark Crusade, mostly because I became hooked on Relic Entertainment’s WWII Company of Heroes game and wondered if they could also do a great job with Dark Crusade. Well, lighting has definitely struck twice because Dark Crusade is one of the most well made wargames ever created. All the flavor of the Warhammer 40,000k universe comes through with flying colors, and there seems to be an army tailor made for each strategist’s tastes.

The plot of the game is that the planet Kronos has been conquered by a new race not before seen in the Warhammer universe called the Tau. The Tau have a lot of technology on their side and a very balanced army that consists of cannibalistic front line lizard-like fighters and high-tech ranged infantry in battle suits. They are probably the most difficult race of troops to play given that you have to strike a lot of balances, but if played well could arguably be the most powerful in the game.

Problems arise when a second new race called the Necrons rise up from subterranean crypts and start taking over the planet. The Necrons are both robotic and undead. When a squad of Necrons are killed, there is a chance that some of them will rise up again to continue fighting, which plays havoc on anyone trying to secure a defensive perimeter against them. They also continually respawn troops at a set rate depending on how many strategic points they control. So the Necrons can easily be used to surge over all opponents, with dead troops sometimes rising up behind the lines to wreak havoc in areas opponents thought were safe.

The Necrons are an ancient enemy to the Eldar, which are an interesting race familiar to longtime Warhammer players that honors beauty and function equally. Their buildings look extremely picturesque with fine lines and angles, but are just as deadly as the counterparts of their more utilitarian foes. The Eldar are a dying but powerful ancient race, able to construct warp gates to move their troops instantly across the battlefield. They come to Kronos because they don’t trust anyone else to put the Necrons down once and for all.

The appearance of the Eldar leads to the deployment of the Imperial Guard, an all-human army whose strength is based on massed ranged attacks and defending areas by keeping opponents well away. They can deploy tanks and artillery vehicles in offensive or defensive operations, and while their troops start out week, their squads can be upgraded with leaders and equipment to become some of the most powerful in the game. A huge squad of guardsmen equipped with pulse rifles and grenade launchers being led by a smart sergeant is a terror on the battlefield, especially if backed up with heavy artillery.

The Space Marines, also from the human empire, land on the planet as well, with orders to purge it of everyone else. Apparently there are secrets buried on Kronos that their religious leaders don’t want anyone else to know about. Problems arise when the Imperial Guard, which has been ordered to conquer the planet, refuse to leave when the marines arrive. This puts the two human armies on opposite sides of the line from one another, kind of like if the US Marines and the US Army got into a firefight.

There are also the Orks, which come to Kronos to make trouble. They are the most humorous army, with their "Waaarg!" charges and their mostly melee troops. Although they have to close with opponents to be most effective, most of their army can be equipped with jet packs for long leaps behind the lines. They can be very effective against armies like the Imperial Guard, which relies on ranged attacks, because they can quickly close and jump into hand-to-hand combat.

The Chaos Space Marines round out the motley crew that wants to take over Kronos, so they can use the bloodshed there to summon their dark god. They have a lot of cannon fodder type troops in the form of cultists, but also a lot of very powerful troops that are good at both ranged and melee combat. If they can use the cannon fodder to gain time, they can build up a nearly-invincible force in the backfield and roll it out at their leisure.

No matter what your play style, from a balanced approach to an in-your-face rushing army, to a defensive turtler, one of the armies in the game will be able to implement your strategy perfectly.

So there you have the situation. Seven armies have come to one planet and are ready to have it out with all the others. Kronos is not a powder keg; it’s an atomic bomb that has already gone off.

Gameplay consists of a strategic map where you can examine the current situation, the placement of armies and the disposition of different strongholds. At the start of each game, each of the seven armies have claimed different territories. Each territory earns a different amount of requisition points each round which can be used to purchase starting armies. And some territories have special abilities like a space port that lets you attack anywhere on the map that is not an enemy stronghold, or a daemon that "blesses" your army with the ability to move twice each turn.

So different places are worth more than others, so you have to carefully plan where to launch your attacks. Under normal circumstances you only get to move your army once each turn, so you have to make it count. If an army loses the territory where its main stronghold is located, it will be out of the game, though its remaining troops will still defend themselves in any territories that they occupy even after they are defeated.

When you attack or if you are attacked, you then jump from the turn-based main map into a real-time battle. In these battles, most armies have to capture strategic points to gain reinforcement points and also build power plants to generate power. Both of these resources can be spent to build buildings and train troops. Some armies work a bit differently, but in any case you will want to capture strategic points to simply keep them away from your opponents.

The action part of the game is fast and furious, with awesome graphics and plenty of carnage. One of the best parts of the game is that you can fight your battles pretty much how you like, pushing first tier troops out to overwhelm your enemies or building up elaborate defenses and training your army to the highest level before striking against them. As a nice bonus, any buildings that you construct when attacking a territory stay in place should you have to defend it later. So you don’t have to build up everything again, which is a nice touch.

One of the things I really like about Relic Entertainment games is the amount of polish that goes into them and Dawn of War is no exception. Each army has its own introduction movie that is quite good. And each time you defeat an enemy by destroying their stronghold, you get to see a movie that shows this happening. And the movie is different depending on what army you are playing and what army you are defeating.

Also, most territories have an introduction narrative that plays telling a history of the land about to be conquered and some of the interesting features that might be encountered. And the voice acting is top notch, some of the best I have heard. Your troops also say different things, and always say something surprising when they first encounter an enemy, commenting on the smelly orks or the tough nature of the space marines as an example.

If you play online you can only control either the Tau or the Necrons unless you buy the original game, but that seems to be the only restriction. If you are only playing the single player part of the wargame, then you can pick any army you want.

There are also some RPG elements as you can increase the power of your main character by leveling him up, adding new items that make him more effective in combat or offer new combat abilities. How you level up is up to you.

The only real complaint I have is that the computer armies on the strategic map are not aggressive enough. They move around some but don’t seem interested in attacking one another. In fact, in some games I have played, one or two of the armies did not move at all. They just sat there, which I could see if they needed their points to build something, but you would think they would eventually want to attack someone. Still, the fact that each territory is setup differently, with some offering some real surprises, keeps the game from getting dull.

Dark Crusade is a great wargame with a lot of political workings and intrigue to keep story and RPG players happy. And of course there is plenty of war-like action to keep strategy gamers on their toes. Dark Crusade is a bright spot in this genre, and should appeal to players at all levels. It earns 4 1/2 GiN Gems for its war treasury, which it will probably spend on weapon upgrades as it marches forward to crush the competition.