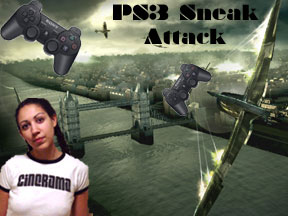 The PS3 has finally come to Europe, without much fanfare or hype. Reading online news pages earlier this week, I was beginning to think that I'd got the date wrong due to the complete lack of PS3 news stories. After the most low-fi console launch in history, the jury is still out, but the console war has begun.

Reports prior to today's launch were that only one in 12 UK stores had units, so has the Â£425 price tag and the months of waiting killed demand? Sony's official line is that their supply has outstripped demand, making this the first console launch to fulfil every pre-order and make machines available to every customer who wants one.

There's no official spin doctoring that can magic away the fact that Sony has had the trickiest console launch in its gaming history. The figures speak for themselves. Wii outsold the PS3 in the US in November by more than two to one, selling 476,000 units. Fast forward to February and the figures don't look any better with Wii still top dog on 335,000 units, Xbox 360 is holding its own on 228,000, with PS3 way behind on 127,000. This picture is even more depressing when you consider that the Nintendo DS, PS2 and even the GBA outsold the PS3 in the US in February.

On launch week, Sony really didn't need news that Final Fantasy XIII is unconfirmed as a PS3 exclusive – a jump to multi-format or 360 exclusive would be a bitter blow indeed. This follows news of Devil May Cry defecting to the multi-format division, along with confirmation that GTA IV, another traditionally PlayStation exclusive, will be launched on 360 as well as PS3 on day one.

Then came the bombshell concerning certain launch title slippages. Oops, Splinter Cell and Oblivion took a tumble and will now be available on PS3 some time in April. F.E.A.R. also slipped off the launch line-up, leaving a very lack lustre list for gamers, who if they have any sense will have already played most of them on 360 months ago.

The PS3 hasn't exactly been a stranger when it comes to technical"er issues. Most noteworthy is its ability to output beauteous HDTV graphics – or not. A bug has meant some machines fail to convert the signal to 1080i, resulting in a less than slick picture, shall we say. There have also been issues with audio cut outs and flickering pictures – just another headache for Sony.

Of course, as we're paying the most money for the PS3 you'd think Sony would ensure value for money – heh hem. Well, it seems we're getting cheaper parts inside our glorious next gen machine, which initially meant just 40% backwards compatibility in the UK, compared to 98% in Japan and the US. Holy crap is there no end to Sony's disregard for Europe!? This has now been somewhat resolved, but we still don't get the same degree of playable PS2 games as the rest of the world.

The key for PS3, as with any console, is going to be the games. Considering its head start in the US and Japan, you'd think Sony would have pulled out the stops to have a killer app on European launch day. But that would be too much like sense my dear play chums and too much like doing us continental types a favour – something obviously pretty low down on Sony's priority list, below wiping down houseplants and pulling hair out of the plug hole in the shower.

With less and less third party exclusives to show for itself, Sony's going to have to woo gamers with first party titles. Now, this is something Sony can do well with Ico and Shadow of the Collossus pleasing the hardcore and Guitar Hero and Singstar pleasing everyone. Heavenly Sword is coming, but can it live up to the hype? And of course there's the traditional latest incarnation of Metal Gear frenzy for those people who like that type of thing, but it could be only so long before Konami goes the way of the multi-format whore.

In the grand old tradition of PS2, the PS3 is proving to be a swear-inducing machine to code for, so it may take some time for developers to really push it to its limits. However, the PS2 proved that over time developers can produce some fantastic results and we all know it gave us some of the finest games of the last five years. According to Sony's big cheeses, the PS3 plans to be with us for ten years, so maybe the Â£425 price tag won't seem too much if they keep to they're word. Although, rumours of price drops are already gathering pace and I for one am waiting for that.

It's not all doom and gloom for Sony though. In fact, 360 is sitting firmly in third place in the next generation stakes in Japan; selling fewer units than both PS2 and PS3. The undisputed leader is the Wii and only time and upcoming titles will tell if it can maintain that lead. There's no doubting Sony's in for the long haul and Christmas 2007 is going to be the one that sorts the men from the boys.