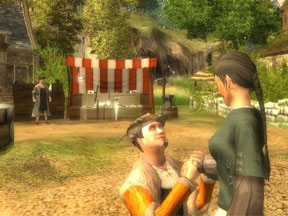 There are some games that are so complex that they have steep learning curves, and The Guild 2 easily fits into this category. But sometimes all that time spent learning is worth it, and thankfully, The Guild 2 also fits in with that group.

Most games put you in charge of armies or countries or kingdoms, but The Guild 2 has a seemingly more modest focus. You are one person, a commoner, with dreams of creating a powerful family dynasty that will last forever.

You make your character by spending points on various attributes like strength and stealth and bargaining, and also pick your heraldry shield as well as your basic looks. You can also pick between four different basic professions including patrons, scholars, craftsmen and rogues. The first three classes are fairly similar. Patrons grow crops, run taverns or brew beer. Scholars run churches or alchemy shops. Craftsmen make clothing, jewelry or weapons. And rogues pretty much steal anything they can get from everyone else. Playing a rogue family is actually like a different game, so we will talk about that last.

After you pick your class you are given a modest shack in your chosen town, a sack of gold, and little else. The first thing you will need to do is to either purchase a building for sale that fits your class or build one. If you are a patron, you might want to buy a small farm or a tavern, though you may end up having to construct one, which might end up being cheaper anyway.

Once you get your business up and running, you hire workers and a transport cart. At first you have to do everything yourself like sending the cart to the market to get wool and telling your workers to make the wool into tunics, which is then returned to the market to be sold or perhaps put up for sale at your shop itself. Eventually, you can automate most functions.

But The Guild 2 is much more than a simple economic simulation. It is in fact the closest approximation to a living and breathing medieval village I have seen since my last visit to the Renaissance Festival. There is so much going on around you, that it’s difficult to take it all in. You want to just put your nose to the grindstone and work on building up your business, but if you do that, your dynasty will die out before it ever really gets started.

You need to integrate yourself into the town. That means visiting the town hall and seeing what kind of business is going on there. You can apply for a higher level of citizenship or even a noble title, which means you are allowed to improve your hut and business, hire more workers and run for office. Plus, the higher your title, the more people will respect you, at least in theory. Getting a better title generally means bribing corrupt officials that can make it happen for you. It seems everyone in the Middle Ages has their hand outstretched and if you grease a palm or two, you can get things done.

You might even try running for office, which means – you guessed it – bribing the higher up officials on the council to vote for you. But a political office is a big deal. Besides a regular salary that can be more than your farm earns in a season, you are given some interesting powers depending on your new job. You might find yourself getting kickbacks from others trying to do something, or be granted immunity from prosecution in a court of law – a great perk if you are playing a rogue. So long as you stay in office, its open season. (evil laughter) You might even get to be the leader of the town guards which means you can have them harass your rivals or only guard your caravans, or you could run the town dungeon which lets you torture those stuck in the prison at will. Who knows, you could even become the mayor of the town, though this is a lofty goal.

Besides the normal harshness of medieval life, you also have a lot of rival families that are trying to do the same thing you are, and you will likely make enemies. These enemies can sometimes try to burn down your buildings or raid your stores, or even attack you outright. To counter this you will need to hire retainers to protect your important family members and businesses. You can also hire sneaky henchmen to follow your rivals around, collecting the dirt on their nefarious business. If you collect enough evidence, you can take them to court or try to get them tossed out of office, which is great if they are in a council seat you want. Perhaps you can even make them pay a fine, or be sent to the dungeon – which is great if you happen to be in charge of the place.

But wait, we said family, right? You are alone in the world to start, and your employees generally don’t want to socialize with you much. Besides, you don’t want to flirt with anyone who is beneath you on the social ladder do you? Well, perhaps if they are hot, but come on, you have a dynasty to create here.

A menu will show you all the eligible members of the town that you might consider marrying. Generally you want to marry someone who is of a different profession than you, like if you are a farmer you should perhaps marry a blackSmith, especially one that already has a thriving business. That lets you pursue two career paths. But you need to court the person you want to marry, which involves giving them gifts, taking romantic baths and showering them with compliments. Certain attributes that you can choose as your character levels up, like the Karma Sutra ability, makes this process much easier.

If you are lucky enough to get married, then you can set about having children. You need to make sure you have upgraded your personal residence at this point, just so there is plenty of room for the kids, plus some private areas where you and you love can get down to business. Kids start out as non-playable characters at first and you can watch them grow up. If you have enough money for schooling and apprenticeship, they might just become a useful addition to your clan. Times being what they are, you better have a bunch just in case. You can have three active characters in your dynasty at any one time. Eventually, as your first character dies off, you can continue playing with the rest of the family.

As a rogue, things are a bit different than the other classes. It’s almost like a different game. You still hire "workers" but they become thugs. These thugs are based at your hideout (there are two types of dens you can have – one for town robbers and one for highwaymen). Your henchmen can earn money by breaking into buildings and robbing them blind or attacking carts full of goods and stealing them back to your hideout, eventually taking them to the market yourself. Or you can convince legitimate businesses that they should pay you protection money, just to make sure something tragic and painful does not happen. More than any other class, you need to be sure to upgrade your weapons and armor for both yourself and your thugs since they are in constant combat.

And there is every chance that you will be accused of crimes (you are responsible for all crimes committed by those working for your family) and drug off to court. You can refuse to go to court, but then you will be named an outlaw, which means anyone can kill you at any time without legal repercussions. Of course they have to actually attack you, and most people won’t have the stones for that. Or you can go to court and plead your case. A couple of well-placed bribes can ensure victory for you, or at least a lighter sentence.

I chose a different route. Whenever my rouge was accused of a crime, she used the time (normally about a full cycle or four game years) to prepare her case. And by prepare her case I mean stalking the prosecuting attorney, the person that accused her and perhaps one of the judges — and killing them. And if someone accuses you of the murder (you can often kill someone when they are alone if you follow them long enough to avoid this) well, simply repeat the process. You have to have good armor and a tough weapon like a battleaxe for this plan to work, and a mob of thugs surrounding you does not hurt, but I she was accused of a crime seven times over the years and never convicted. The judge would look around and say "Well, it seems the accuser did not even both to show up. Case dismissed." This, by the way, plummets your relationship with other dynasties, but if you are a rogue, they won’t like you anyway.

The only negative about The Guild 2 is that I have to give it a low gameplay score. The manual, which should be required to be excellent for a game with such a steep learning curve, is woefully inadequate. And even going through the eight tutorials won’t quite tell you everything about the game, like how to conduct yourself in a court of law, or how to pray in church. These things have to be learned by the player, which makes the learning curve even higher than it needs to be. I found that the time I put into the game was worth it, but there are plenty out there who won’t struggle through to proficiency. There is also a patch out that I would say is an absolute necessity before you start playing as it fixes a bunch of annoying bugs.

If you can handle the steep learning curve, The Guild 2 is a great game that is actually unique among those in the crowded simulation field. It earns 4 GiN Gems.