When you search for a gaming keyboard or mouse, you will likely find hundreds of possibilities covering all price ranges from nearly every electronic store. But getting a good keyboard and mouse that not only looks great with your gaming PC, but also one that helps you to play at your peak, is not always that easy. Some are too flimsy, too dark to use in dim lighting conditions, or simply not responsive enough for performing against other humans who might have better gear.

The IOGEAR company has been making peripherals for a very long time, but only recently branched out into pure gaming and eSports environments. But those years of expertise is evident in their latest offerings, the Kaliber Gaming HVER PRO mechanical gaming keyboard and the Forkus II Precision Gaming Mouse. IOGEAR sent both over to GiN for review, which is good because they really compliment one another nicely, and if you are going to get one, you should probably go ahead and grab them as a package deal. 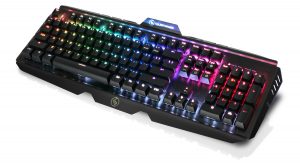 When we talk about keyboards and mice, even fancy ones that light up, they are almost becoming a commodity. Other than a few specialty models, like one we recently reviewed that was specifically designed for the Xbox One with things like a magnetic mouse and tray (great for consoles, but not so good for PCs and their magnetically susceptible media) it would almost seem that one is almost as good as the next. Nothing could be farther from the truth, at least for gamers.

Anyone who has ever tried to line up a headshot from a great distance on a moving target knows that precision is everything. The Forkus II Mouse responds with an incredible 12,000 dpi optical sensor that makes guns like those found in Sniper Ghost Warrior 3 seem like the precision shooting tools that they are in real life. Even fighting a bit more in close quarters, like with the crazy Shambler Shot Gun and its powerful recoil from Metro Exodus, our testers noted increased precision and even reliability. When they needed to quickly draw down and aim at or even snapshot on a target, the Forkus II never wavered.

[amazon asin=B07KYYMN2Y&text=Grab your gear! Get one of these precision keyboards and mice from Amazon today!]

The mouse even has five different DPI settings, so you can set it to be just as precise as needed for the game at hand, without being over sensitive when playing, for example, classic adventures or lower resolution ones like Don’t Escape 4 that don’t have as many pixels on the screen, making a 12,000 dpi sensor serous overkill. 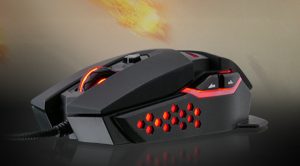 The mouse has some weight to it, which many gamers prefer to give their movements some heft, and to resist drift when you need it to be idle. Some of the components are made of metal, and the sides are cut into little holes to give it texture. It feels good in your hand, and resists slipping. Never once in our extensive testing did anyone report losing their grip on the Forkus II during a heavy gaming session. And its designed to work for both left and right handed gamers, so it’s completely ambidextrous.

It also looks cool. It can cycle between seven colors or be programmed to stay on your favorite, or perhaps your eSports team colors, the entire time. There are eight programmable buttons. Using the included software you can set the buttons to do anything at all, even opening files or entering text. The default settings for the buttons do common things like raise or lower the volume on gaming PCs, and of course fire weapons and things like that for games. We did accidentally hit the volume button a few times by accident on the one side, though we could have disabled it if it became too annoying. 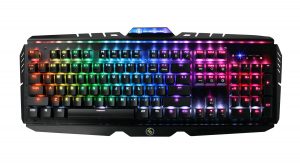 The Kaliber Gaming HVER PRO keyboard was just as impressive. It has a solid aluminum frame that makes it feel like a precision device compared with the plastic molds found in other keyboards. And the heavy frame tends to anchor it in place, so it wont slide around, even if you are forced to play at a remote site or at a tournament on a less than ideal surface.

You can get the HVER PRO with the passive (silent) keys that some gamers, especially competitive ones, really love. Or you can get it with clicking keys. Personally, I like it when the keys click as it gives me audible feedback that I’ve hit a key. But I understand that the silent keys are quicker to press because they offer less resistance, important to eSports gamers or those who are heavily into multiplayer. The key to the type of keyboard is the switches, either red or brown, to denote if you want clicking or silent keys. You can change them over later if you decide you want the other type.

The keys feature anti-ghosting, so you wont get killed in a game because of a mistype. And it has full key rollover as well, another nod to precision. And like the mouse, it really lights up. There are many cool patterns that you can set, from flashing rainbow hues to explosions that radiate outward when you touch a key. Of course you can also set just a single color to display. The blues are particularly vivid.

Each of the keycaps is made of double injected molds, so wearing off the letters is not very easy to do. We put about 200 hours of hard play gaming on the keyboard as it was being tested and nothing rubbed off anywhere.

The Kaliber Gaming HVER PRO keyboard and the Forkus II mouse wont make you a better gamer, but it will let you play at your best, and look darn cool while doing it.