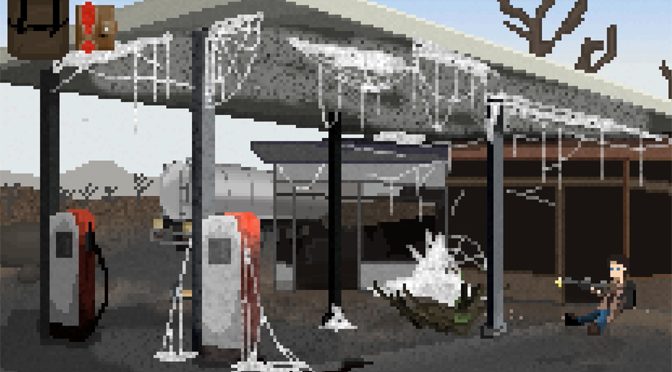 Developer Scriptwelder has created one of the best point and click adventures that we have played in a very long time. Originally titled Don’t Escape: 4 Days in the Wasteland, it has been renamed since launch to the much more properly descriptive Don’t Escape: 4 Days to Survive. Though actually, the Don’t Escape part is a little confusing. Regardless, the game offers some realistic point and click adventuring where common sense actually holds sway. 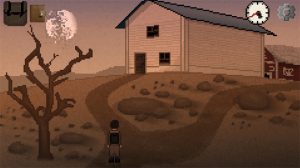 If you play a lot of point and click adventures, you probably know the frustration of seeing a problem like a fire blocking your path and not being able to use a nearby bucket of water to put it out. Instead you are often forced to do something really convoluted like feed some chicken enough grain so that it lays an egg which is then traded to a troll for a potion of fire resistance, something stupid like that. Thankfully, for the most part, Don’t Escape: 4 Days to Survive avoids those terrible scenarios in favor of realistic puzzles that actually makes sense, and might actually work in the real world.

The game is set in modern day, well 1996 anyway, and seems realistic despite the otherwise fantastic scenario that caused the pending apocalypse. There is this very evil corporation that accidentally blew up the moon, and in four days it will come crashing down to Earth and destroy everything. Now before you start wondering why you should care about surviving for four days when its game over on the fifth regardless, know that early on in the game you will meet someone who has an exit plan. The plan involves a spaceship and breaking into said evil corporation’s facility in order to catch your ride to space. I don’t want to give away too many spoilers, but know that as crazy as it sounds at first, that the game eventually comes up with a fairly plausible explanation (in terms of a sci-fi world anyway) as to why any of that crazy plan could actually work.

But getting to the spaceship is only done in the very last part of the game. Before you can start on that quest, you have to survive through three days of whatever crazy hell the wasteland can throw at you. At the very beginning of the game you will find an abandoned farmhouse which will be your base of operations for the bulk of the game. You will venture out from there to find materials and sometimes other survivors, on foot or eventually in your own pickup truck (if you take the time to fix it up, which you really need to do). 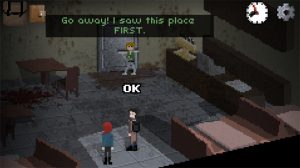 Your goal for each day is to simply fortify the house to be able to withstand whatever threat is coming that night. Thankfully, you will receive a dream each morning with a premonition of you dying horribly, so you know what you will ultimately face. The cool thing is that there are quite a few different kinds of threats, and the game randomly sends them your way on different playthroughs. Some of the threats are environmental, like the fact that it will get freezing cold at night, or that there will be a cloud of poison gas drifting in. Some of the threats involve things like spider monsters that require you to lay traps and plan defenses. You might even face a human gang which is probably the most deadly of the challenges. 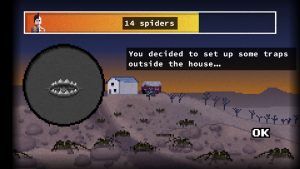 You have 12 hours in which to complete your tasks each day. The game is pretty fair about time management. When you are just walking around and exploring an area, time is paused. It’s only when you travel to a new area, or when you need to take an action, that time advances. For example, nailing up a bunch of steel bars to a window will take some amount of time, reduced slightly if you have found other survivors to help you out or have acquired the correct tools. So will traveling to a new area on the main map. 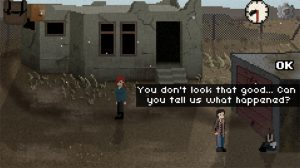 Interestingly enough, things you do one day might help you the next. For example, there is a big gully between your farmhouse and the town where you will be doing a lot of savaging. If you have some extra time one day, like all your defenses are in place and its still several hours till nightfall, you can take time to build a bridge using planks and nails. A pedestrian bridge takes some time to make, but will save you a little bit of time. A full bridge takes many hours and might have to be finished over multiple days, but will let you drive the truck over it. Trust me, you want that full bridge because driving across town will save you hours in the long run versus walking, especially in the later part of the game when new areas to explore open up. 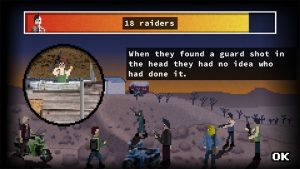 Once the day ends, the scenario for that night plays out in story fashion. Choices you made during the day will reduce the threat. For example, if you got the house powered in the cold night scenario and opened up the oven, it will make the kitchen a little warmer if you huddle there. Or if you placed a couple bear traps on the (extremely scary) night of the giant spiders, that might take out two of the hoard of 20 of them. If you did everything right, or mostly right, then you can reduce the threat to zero, as in killing all the spiders for example, and then survive the night. If you did really well, then you are sometimes given a permanent bonus to your character like increased carry weight. 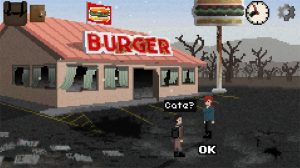 The scenarios vary in difficulty. I ended a few with only a couple minutes left on the clock, and other times I had hours and hours to spare. But all of the challenges are fun and rewarding, and like I said at the beginning of this review, the things you do to build your defenses all make sense and would probably work in the real world too. And while you will probably play the game though more than once (because the plot is setup for replays) you will encounter different events each time, so the game wont get old so long as you enjoy the base mechanics. 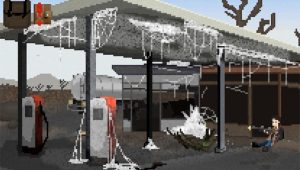 Graphics and sound are nothing to write home about. The graphics are pixelated, like the old King’s Quest type games from long ago. You can tell what everything is, mostly, and some of the graphics are surprisingly well-done, though I do wonder why they don’t have just a little more detail. Even for pixelated games, this one is fairly low-res. The sound also consists of music and little else other than a few special effects. So expect a lot of reading, which again, is somewhat hindered by the low res graphics. I suppose you could pretend that it’s 1996 when the game is set, and that these are the pinnacle of computer graphics if you want.

Don’t Escape: 4 Days to Survive is a fun game to play. It mixes both the survival and point-and-click adventure genres together quite well, with perhaps just a dash of horror mixed in for good measure. If you are looking for something quirky and cool along those lines, it’s a good value for the money.