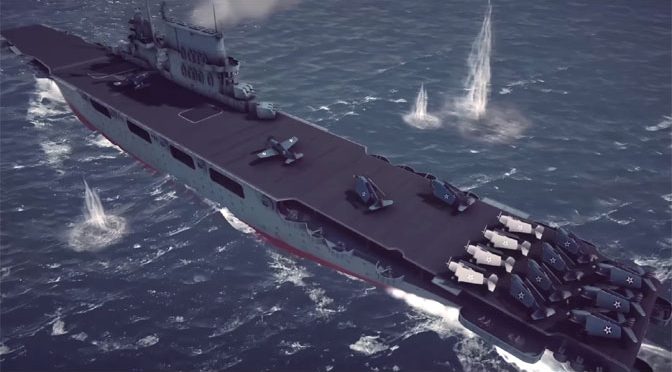 World War II wargaming is as popular as ever, with everything from shooters like Call of Duty: Vanguard to tactical titles like Fight for Freedom represented. Out on the sea, there are fewer options for gamers, and mostly all simulation-based titles. Of those, they normally fall into one of two categories: those that are simple and easy to play, but not very historically accurate, and those that are exceedingly complex and accurate, but with steep learning curves to even get your ships out of dry dock. Looking at both of those kinds of games, the Battlefleet series is a good representation of the former, while War on the Sea is a great example of the latter. Both are good titles, but also quite different from the game we are reviewing today. 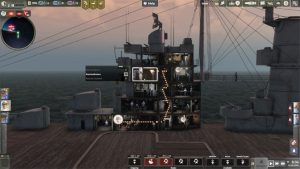 Sailing into this battle comes a whole new type of game, represented by Aircraft Carrier Survival from Gambit Games Studio. I had been eying this one for quite some time on Steam as it moved through the development and early access process, and was happy to finally get to set sail with it when it officially launched in April. The developers have a few games under their belt, but nothing so ambitious as Aircraft Carrier Survival. However, if players do end up enjoying this game, then Gambit Games is also working on a space-based title called Space Commander which looks like it may follow the same format.

But back to World War II. Aircraft Carrier Survival puts players in charge of an aircraft carrier, sitting in the middle of a battlegroup. You don’t directly control the other ships, but can sometimes give certain ones orders, like asking for the supply vessel to fill you up with fuel. But for the most part, you only need to concern yourself with the carrier and its fleets of aircraft. Everyone else will follow your lead. 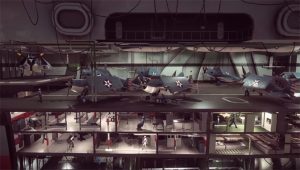 The game’s interface is intuitive and also designed so that just about anyone can play, even if they are not experienced wargamers. This is not a hardcore simulation by any means where you need to control every single aspect of your ship. Instead, you move officers and crew around to different compartments using a view where the side of the ship is cut open. (The cutaway view reminds me a lot of Fallout Shelter.) Once the right staff march into place, you can give them orders like moving the ship forward along a plotted course or preparing for various air operations. You can also respond to emergencies in the same way. Once you know the system, it’s very easy to play by moving your crew “resources” around the ship, almost like a board game. That is not to say that you can master the game easily, just that learning the basics won’t take very long.

Players will likely need to play through the tutorial missions to pick everything up, but beyond that, as previously mentioned, the game plays almost more like a board game more than a simulation in a lot ways. The fact that there is a level difficulty selection only adds to the accessibility. In terms of what you can play, there is the aforementioned tutorial levels, a campaign which took about 15 to 20 hours to complete, and a sandbox mode where you aren’t tied to specific campaign missions. 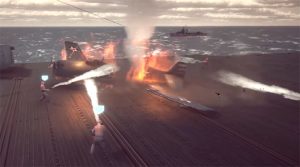 One thing to keep in mind is that at its heart, Aircraft Carrier Survival is actually a time management game. Moving officers and crew around takes a few minutes while they travel, although that probably won’t mean much unless there is a real emergency. However, air operations take considerably longer. It might take two hours for an air group to reach their target, 15 minutes to attack, and then two hours in order to fly back home. You have to calculate how those operations will play out so that, for example, the ship can be in place to retrieve your aircraft and pilots when they return. 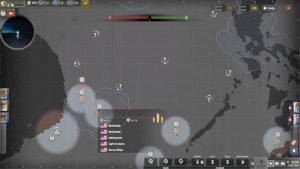 But you also only have a limited amount of space on your flight deck, and it takes a lot of time to move planes around and reconfigure it to switch between operations. If you are jammed up trying to get torpedo bombers armed and launched then you may not have enough time to launch fighters if you are attacked. Then you could experience the same fate as the Japanese carriers at the Battle of Midway when they got caught with no air cover and decks filled with ammunition and gasoline. Which is to say, it will be game over. 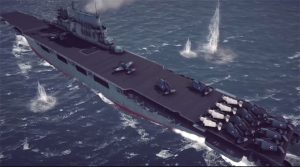 The most successful players of Aircraft Carrier Survival will be those who are able to visualize how they want to manage their flight deck, making sure there are appropriate windows for safe takeoffs and landings, keeping your vessel protected at all times, and efficiently launching strikes at the enemy. In campaign mode, you will have additional pressures too, like a limited amount of time to sink an enemy fleet or to provide air cover for a ground invasion. You will need to figure out how to accomplish all of your critical objectives while also keeping your fleet safe. 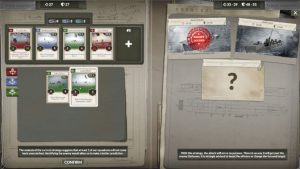 You have a few non-historical gamified-type abilities to make things go a little more smoothly, namely battle cards that can be played to enhance operations. Here is where Aircraft Carrier Survival is really much more like a board game. You have five slots to play cards from your deck, and each one has different properties that affect not only the aircraft in the strike but also cards sitting in other slots. For example, the Torpedo Run card provides a 25% boost to the defenses of everything played before it, and a 25% boost to the attack of whatever comes after it. By strategically playing your cards, you can stack bonuses and overcome situations where the odds are initially against you. 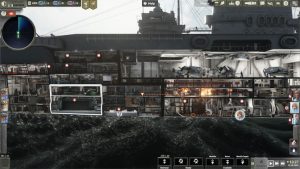 The computer even gives you an analysis about how useful your chosen strategy will be, whether or not you will be able to kill your target and how many squadrons will make it back undamaged. Here again, this kind of god-like premonition gets away from the simulation aspects of the game, but makes it much more playable from a strategic perspective. It’s even more like a board game than a true video game-type simulation in these parts. That’s totally fine, so long as players know what they are getting into. I found this change of pace refreshing compared to the normal hyper-realistic simulation type of naval game we normally get to command. 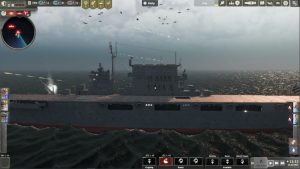 The simple setup is nice, but can get a little frustrating if you are looking for a bit more control. For example, you really need to follow a set procedure for attacking an enemy fleet which I thought was a bit too restrictive. First, you have to do a recon mission to try and find them. Then you need to send a second squad to do target analysis, because I guess the recon pilots are no good at telling the difference between an aircraft carrier and a cruiser. Yes, there were lots of instances of mistaken identity in target analysis, just look at the Battle of Leyte Gulf, but it does add another step. Finally, you can launch your strike using torpedo planes, dive bombers and fighters, using the aforementioned card mechanic to ensure a victory. 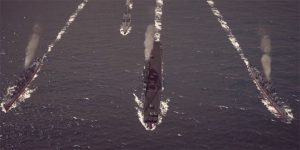 Graphically, Aircraft Carrier Survival looks pretty good. It’s not photo-realistic or anything, but you can tell what everything is so you know where to send your crew, or which types of aircraft you have on deck at just a glance. The music is even better. It stays in the background but is also kind of epic. It fits the game and the historical period very well, and does a good job of adding to the atmosphere.

I had a very fun time playing Aircraft Carrier Survival. It’s nice to find a game that has a grand scale that still manages to be accessible to a majority of players. If you just want to have fun controlling a giant carrier, then Easy mode will provide you with a perfect experience, while Normal or Hard modes are better for veterans. But regardless of your preferences, if you enjoy World War II and time management type gameplay, then you should have a good time ruling over your carrier while it rules over the seas.