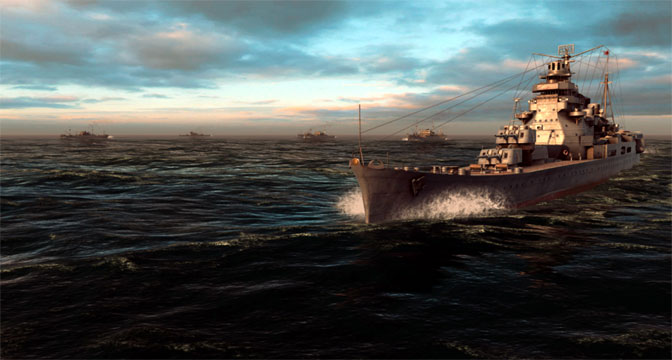 War on the Sea

I love World War II games and have reviewed quite a few over the years, from tactical and turn-based strategy titles like Partisans 1941 to total war strategy games like Making History, Hearts of Iron and Supreme Ruler. And although its not my favorite way to experience WWII, I do play most of the shooters like Call of Duty WWII as well as the older Medal of Honor series.

But my true love is naval combat. There is just something about commanding a huge battleship or a nimble destroyer and working to out maneuver, out think and ultimately out gun an enemy battle group at sea. The last game that I really enjoyed in this genre was Battle Fleet 2 from Capital J. Media. It offered a tactical take on WWII naval combat, but was hardly a “realistic” simulation. 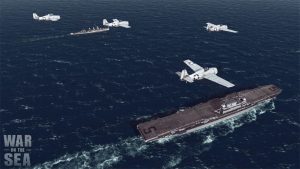 Enter War on the Sea by Killerfish Games, which was recently released on Steam for the PC. Killerfish is known for naval combat games that push deep into the simulation genre. Their other games are Atlantic Fleet, which featured WWII action between the Germans and other allied nations, and Cold Waters which attempted to copy the gameplay formula found in the classic Red Storm Rising game. War on the Sea takes us to the Pacific and the war between Japan and the United States.

War on the Sea in a lot of ways reminds me of the older Strategic Studies Group games that were popular back in the days of Windows 95. It’s heavy on the simulation side, so gamers that require hardcore action all the time are going to be disappointed. This isn’t arcade action like World of Warships. Instead, War on the Sea is going to cater to players who can enjoy long strategic planning sessions, sailing to a destination, micromanaging many aspects of an entire fleet, and then a few minutes of brutal combat to top it all off. 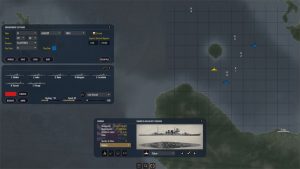 I also should also warn potential players that War on the Sea has one of the steepest learning curves that I have ever experienced with any wargame. If you thought managing every aspect of your chosen nation in Hearts of Iron was tough, I can assure you that keeping a fleet of ships, submarines, support vessels and aircraft operating at peak efficiency is much more difficult. There is a long series of tutorials to go through to gain even a moderate proficiency with the game, and it’s pretty much required in War on the Sea. So plan for many hours of training before you attempt your first skirmish or historical battle, much less before you take on the war at large. 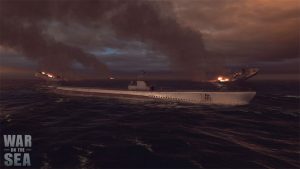 Having played two campaigns and several single battles, I can also attest to the fact that if you invest a lot of time into War on the Sea, that you will be rewarded. It’s incredibly satisfying when you land a fatal hit on an enemy vessel, and almost as exciting when you are able to save one of your own after suffering seemingly critical damage. In addition to directing the fight and the guns, you will also need to fight fires, counter flooding and do other damage control activities. Just add that to your list of never-ending fleet tasks. 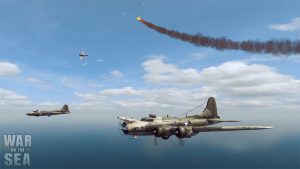 While I enjoyed my time with War on the Sea, I think there is too much in the game for one person to have to track. It would be a lot better if you could set up some more automatic actions. If you think about it, you have an entire crew stationed on each of your ships. You shouldn’t need to always tell them put out a fire or to shoot down an enemy recon plane that is leisurely flying over your fleet. I almost expected to have to pause the game to mandate bathroom breaks for each of my sailors. There is an orders section that helps out somewhat, but there needs to be additional automation to make the game more accessible. That would help make things a little more fun too. 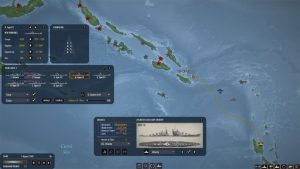 Moving to the air, the controls for aircraft are a little bit more difficult to master than ships in some areas. Controlling a single plane tactically is pretty easy, but giving orders to an air wing is far more clunky than it needs to be. The game treats planes almost like ships in terms of control, which doesn’t work perfectly because they move so much faster, and so do their airborne opponents. Having to select other planes to engage in dogfights, for example, takes up too much time. Good pilots should just attack enemy planes, or at least you should be able to clear them to do so. Given that this is the time in world history when air power begins to reign supreme, having better control over your aircraft is paramount. 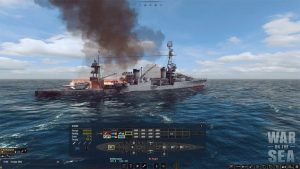 Graphically, War on the Sea looks amazing, and the ability to switch between the surface of the sea, the air and underwater views is a very nice touch. It’s easily one of the best looking WWII combat simulations out there. I really wanted to give the game a perfect five GiN gems for graphics, but there are some problems. The biggest one for me is that the ship models are not always historically accurate. 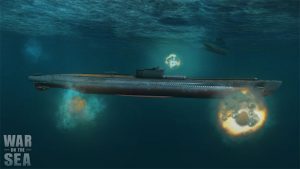 I have some posters of World War II combat ships hanging in my game room, and I can tell you that, for example, Gato and Trench class submarines have different superstructures, though this is not represented in the game. It’s a minor point, but for a game like War on the Sea that strives for accuracy, the small details are important. 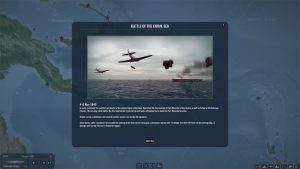 War on the Sea is not for everyone. But if you like the kind of deep strategic thinking that the game requires, and don’t mind a fair amount of micromanaging, then you could have a great time with this one – if you invest many hours in first becoming proficient. It would not surprise me if Killerfish Games continues to improve War on the Sea over time like they did with their other titles. But even in its current state, War on the Sea is a good game for the right kind of player.

War on the Sea earns a highly respectable 4 GiN Gems out of five.