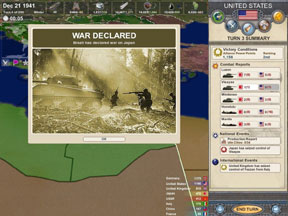 Making History: The
Calm & The Storm

When I first read the story behind Making History: The Calm & The Storm, I thought it might be a great column. Here is a game that was specifically created for educators, but the concept and gameplay was so good that the developer decided to make a go at a full-scale commercial endeavor.

The obvious comparison for Making History would be the Hearts of Iron series from Paradox Interactive. But whereas both games follow World War II, it seems like Hearts is more concerned with the actual combat while Making History is more into the reasons why the war, or why any war, actually happened.

Making History: The Calm & The Storm puts you into a leadership role in the 1930’s and 40’s. The raw game only allows you to lead the major combat nations of WWII, but a recent patch allows almost any nation to be played. If you buy the game, be sure to grab the patch before you play. Most of the time a patch tweaks gameplay a bit. Here, it almost makes it a separate game, and a much better one.

When we say you are the leader, we mean it. It is all pretty overwhelming at first. You are in control of your nation’s economic and production goals, scientific research, military strategy, foreign relations, trades on the world market, infrastructure investment and your economy.

You will also quickly learn that what most of us were taught in school about how Germany and Japan were "evil" and everyone else "good" is extremely simplistic. Try playing as Japan and devote yourself to peace. You will find out how impossible that course of action really was. Without the war, the Japanese economy would have collapsed and the nation probably would have fallen into a second rate or even third rate world power. I am not saying it can’t be done, but I tried to avoid war several times and could not do it.

Or if you are one of the allied nations, perhaps you think you can eliminate the German threat by simply building up and getting ready for war early? Wrong. First off, Germany was no light weight even before the war. A lone country like France or England acting alone probably could not have conquered them. Secondly, you will find that the attitude of countries that ended up being allies was not exactly friendly before the war began. Nobody basically wants to ally with anyone else before the first shots are fired. They have too many troubles of their own to side with anyone else.

You just want to scream at them that you are staving off a terrible war, but nobody will listen. You begin to appreciate why Neville Chamberlain was hailed as a hero because he apparently stopped the war from happening, even though all he really did was delay the inevitable and in fact, made things a lot worse once the war really did get going. But seen through the eyes of someone living at the time and trying to keep your government together, you will being to see why events played out the way they did.

And then consider a country like Italy, which ended up going to the Axis side at first in the war. Why would they do such a thing? Well, when you start playing as Italy, England and France are your friends, but Germany’s emerging fascist government has borrowed many of your ideals. You can’t really ignore them because you have told your people how great fascism is.

Then you will start to get aid requests from fascists fighting a civil war in Spain. They can’t be ignored either without weakening your position. But if you help them out, relations with your former friends are going to sour fast. So it’s easy to see how Italy can be lured into the Axis sphere of power with its road to hell being paved with the best of intentions.

If Making History were real-time, the game would be far to complex to really play. Thankfully, it’s turn-based, so you won’t feel rushed to make decisions. Each turn represents one week, so it may take many turns to move armies and fleets, or to produce new units. Just like in real life, time is often not on your side.

Given the detailed economy and diplomacy interface, it’s surprising to find that combat is a little overly simplistic. It’s basically a numbers game with little player interaction once begun. I like the Harts of Iron series better once combat begins, because the addition of historical generals like Patton and Rommel can really change a battle, though they are absent in Making History.

If you want to really learn why WWII occurred, Making History can show you by putting you in the shoes of the people who made it happen. Although it’s not the best wargame, it’s one of the best titles for learning about why wars happen.

You can pick it up on Amazon for just $25 now, which is a real bargain. If you have a kid who is having trouble understanding the history of World War II, it’s a great gift. Those out there like me who play WWII games all the time will also enjoy looking at the pre-war era, and gaining a new respect for why things happened the way they did.