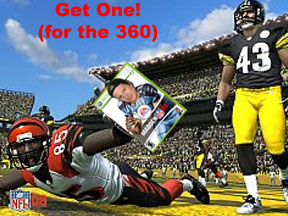 Another Maddenoliday has come and gone. Many anxious football fans such as myself are now huddled in front of our consoles and while NCAA 08 might have been a nice diversion, and All Pro Football being a disappointment to those looking forward to the return of 2K football (which I wasn't) all that mattered was getting back our true NFL fix.

And yes, the glorious arrival of Madden 08 is enhanced by the fact that this year's release finally brings Madden to full swing on the next generation consoles. While 06 came out in a bare bones launch release, 07 started to show some life, but still fell way short. But now, we have the full definitive Madden experience.

And before you all start to send me your hate mail about being Xbox 360 biased, and being a "M$ fanboy," I am not the only one who is saying that. Read every review that has been posted and they will all say that the 360 version of Madden is the one to choose, if only because of how fast the game runs: sixty frames per second.

Madden hasn't looked this good since the Xbox/PlayStation 2 days. And that smoother gameplay definitely makes the subtle control movements easier to perform.
PS3 owners, however, are stuck with a game that runs at only 30 frames per second, the same speed of the last two Maddens on 360. There are even reports that at times the game runs slower than that.

Even a video shown on Gametrailers.com shows how the PS3 version stutters in comparison to the smooth gameplay on 360. This wasn't the only time that games ran smoother on 360. Call of Duty 3, F.E.A.R., and Rainbow Six Vegas have all run better on 360 compared to the PS3.

The complaints have been so loud by PS3 owners that EA Tiburon provided the following explanation: "In the case of the next-generation consoles, many publishers have been developing titles for the Xbox 360 for over three and a half years while everyone who publishes now for the PlayStation 3 with the exception of Sony has been developing for the PlayStation 3 for only a little over one full year. The difference in the overall knowledge of the hardware is vastly different for both consoles and, as is the case with newer technology, it is very difficult to get it right the first time."

In other words, since this is the third Madden release to come out for the 360, the development team has more experience than on the PlayStation 3, which is on its second release. Already PS3 sites, such as PS3 Fanboy, are coming out with their own excuses, the most obvious one being "EA Sports is lazy." Sour grapes, perhaps?

Surely PS3 Fanboy wasn't at E3 last year, because when I saw Madden 07 run on both systems, a 30 percent complete build on the PS3 ran much smoother than a 70 percent build on the 360. All I can ask is what happened?

I do have my own idea though. Could it involve a talent exchange between Peter Moore leaving Microsoft for EA and former Tiburon founder John Schappert heading from EA to Microsoft? Coincidence perhaps?

Still no matter what is said, it is evident that the 360 version of Madden is the one to choose. Now let's see if the biggest Sony fanboy, N'Gai Croal, will agree with the majority.

Waiting for: Bioshock (Xbox 360,) Space Giraffe (XBLA. Who wants to download Ecco anyway? What is taking so long? Now that certification is approved, it better be next week!)