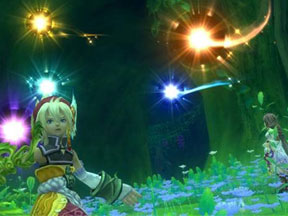 Here we have another game that wants to be like Final Fantasy and live on seemingly forever. But Dawn of Mana has got a long way to go considering Final Fantasy just started over again on the PSP. Plus, the Mana series is no Final Fantasy.

Those of you a little long in the tooth probably remember a delightful game called Secret of Mana for the Super Nintendo. Dawn of Mana takes place in the same universe and acts like a prequel to that game, though with all the flashing forward and backwards in time, parts of it could actually be a sequel.

On the PS2, Dawn looks nothing like Secret. Not that it should given the advances in graphics processing over the years, but I am of the opinion that games should keep at least some gameplay elements of the titles they are based on. Dawn takes place in a fully 3D world where the name of the game is to hack and slash through everything in your path, pretty much like a billion other titles that came out of Japan over the years.

I will give kudos to Square for trying to make Dawn a little different from other games on the market, but this effort only went so far.

You play Keldric, a little boy who ends up with a living vine from the magic tree of mana attached to his arm. This powerful adornment lets him fire rocks at enemies, send out a tendril to grab them, or use the greenery like a normal sword. Unfortunately, the targeting controls are very bad, so you will often end up shooting a harmless boulder sitting beside an angry monster, leaving the unmolested beast free to charge forward and take you out. Get used to that as it happens a lot. We are not talking about Red Ninja level bad, but the game gets your intentions wrong enough for it to be a constant annoyance.

Very quickly in the game you will find a fairy companion named Faye, who can cast spells to boost your power or heal you up when damaged. The plot of the game is that you are trying to rescue your friend Ritzia and also thwart an invasion, not that the plot really matters much here. You also run across a bunch of other fairies in your travels, though all they do is give you special powers like more powerful shots for your vine gun. These enhancements are limited in number, so you have to be careful to only use them when needed.

Where Dawn tries to distance itself from other hack and slash adventures is with the fright system. In every level of the game there are these huge boulders, logs, mining carts, fruit and other odd objects sitting a the tops of hills or on the side of cliffs, just waiting for someone to give them a nudge. When you do, the pile rolls downhill and slams into whatever hapless monster is down there.

This does not kill them, but sends them into a panic. You can tell how long they are panicked by a countdown timer over their heads. If you hit the pathetic creature while its afraid of you, they will drop special items and powerups. Given that most of the monsters are cute little creatures like yellow rabbits that look a bit like marshmallow peeps, or big oversized sparrows, I suppose the moral to teach the kids is that its best to terrify little animals before beating the snot out of them.

Some of the biggest creatures in the game can really only be defeated using these methods. You can also throw objects into creatures by getting behind them and shoving or by grabbing them with your vine tendril. Though if you thought aiming the gun was difficult, try swinging the vine and hitting something. Still, if you master this then the game is a lot easier. After being beaten by a big furry bear-like creature several times, I tossed a log and he went into a huge panic for 45 seconds, which made easy work of him. Creatures in a panic don’t fight back, though boss level ones will rapidly reduce their countdown timers as they are struck.

Graphically the game looks very good. There are some clever levels where you are spinning around on stone tables or other odd floorings, trying to swing at creatures and jump off at the right moment. This is surprisingly more fun than frustrating and really pushes the graphics capabilities of the PS2.

So it looks like Dawn of Mana is cruising for a perhaps an above average grade? Slam! Not so fast. The game also contains one of the biggest programming mistakes ever to grace a console game. At least it’s not game-killing like Dark Angel not building an exit into level 25 of a dungeon, but you will feel this one none the less. That is because at the end of each and every level of the game, all of your stats, powers and accumulated weapons (for both you and your fairy companion) are reset to zero.

So you can kiss all your hard work goodbye, which is annoying even more because the game really encourages you to explore every nook and cranny and to panic monsters before fighting them so you can get extra prizes and powerups – all of which are taken away from you when you leave a level. That has got to be the dumbest gaming decision ever made. Either this was a big mistake and the programmers should be panicked and beaten for not playtesting the game before releasing it, or its something even more sinister – that they meant it to be like that. In the case of the latter, you can forgo the panic and just skip right to the beating. In any case, you have to wonder what the heck they were thinking.

As such, the gameplay score for Dawn of Mana is quite low. Some of the other scores like graphics and sound help raise the overall grade to a 2.5, and even that is sugar coating the frustration you will probably feel each and every time the game switches to a new level.

Editor’s Note: No programmers were harmed in the making of this review. GiN does not encourage the beating of anyone, even programmers that make us so darn angry sometimes. Giant yellow rabbits are the lone exception to this rule, or any pedestrian in a Grand Theft Auto title.