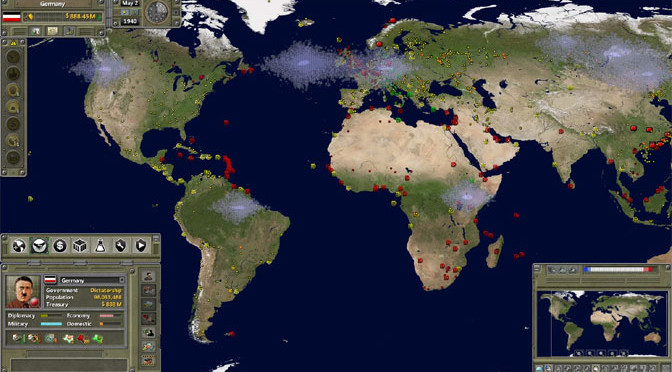 I have a long history with World War II strategy games. In fact, I grab and play every one I can, from Paradox’s Hearts of Iron to Muzzy Lane’s Making History II, as well as a bunch of other less well-known titles that dabble in this genre. So I’m in a really good position to say if a game is worthy to stand among the greats. And yes, Battlegoat Studios’ Supreme Ruler 1936 easily makes the master class. It not only captures the historical accuracy and intense strategy that this genre is all about, but adds its own unique flavor to the mix as well that will make it an instant classic.

Upon installation I tinkered with all of the features and spent the better part of fifteen minutes getting used to the interface. There is a good tutorial that explains everything. Those of you who have played in the WWII strategy sandbox know that it can sometimes take hours if not days to master the control interfaces of some games. So it was a real joy to be competent with how everything worked about a half hour after starting. That’s not to say I knew all the tricks of the trade, but the basic interface part was behind me. I could get into the actual fun part of the gameplay.

And on that note, Battlegoat knows how to make me a happy guy by allowing me to use my native Yugoslavia to rule, which isn’t an easy task in the WWII era. But in addition to Yugoslavia, every country you can think of is at your disposal. If you have a favorite country or a place where your family is from, you can play them here. Of course the big participants are available too. It wouldn’t be World War II without the United States, Germany, Japan, England, Russia and France. Playing them gives a very different perspective than trying to survive as Belgium or one of the Balkans.

When you are in the main menu you have the option to do a historical campaign or attempt a sandbox one. After playing so many accurate campaigns over the years, I elected to attempt the sandbox for my first go around with Supreme Ruler.

Once I got into the game, I learned that even with the game showing players how to do most things, even then it tries to continue to help out, something that not many titles, even those with good tutorials, ever attempt to do. For example, Supreme Ruler made it much easier to choose research projects, letting you know what is farther down the tech tree that you might want, and even offering to automatically choose the research path for you. I declined that offer since I was still coming up with my overall strategy, but it was nice to have an intelligent advisor helping out.

Of course over the next few turns I spent the majority of my time as the ruler of Yugoslavia, working through a geopolitical nightmare with Italy and Bulgaria. Eventually I managed to get myself in a good enough position to not be at war before I was fully prepared. Battlegoat did a great job with the diplomacy system in this game, which was very realistic. The computer opponents (or allies as the case may be) are demanding, but not to the point where their actions don’t make sense. You won’t be going to war over silly things for the most part, but do expect that everyone is thinking about ways to screw you over if the price is right and the opportunity arises. I was able to keep a happy face on most negotiations, giving up little things here and there as I casually played for time, while desperately getting my country in order behind the scenes.

In fact, on diplomacy, I would have to say that it’s so well done here, that it could practically be a game on its own. Those who master it will have a far easier time when the shooting begins.

Then when war finally showed up at my doorstep, there is almost no way for a country in that part of the world to avoid conflict during WWII, I was actually excited. All of the battles are handled by the computer which, of course, is a double edged sword that tends to mimic real life.

On one hand, if you have a well guarded province (mine was around the city of Dubrovnik) then you can survive a massive attack without many losses. On the other hand, sometimes you attack with three times more troops and almost all of yours die despite being highly advanced. It’s just one of those things you fight through and after a while you pick your battles better. Perhaps you become a better strategic commander and critical thinker overall. If only actual world leaders were given such an advantage.

In my first game, I didn’t last as long as I thought I would. In my defense, I can’t fight Germany, Italy, Romania and Bulgaria by myself. Then again, I should have probably been a little less confident in my abilities and adjusted my strategy accordingly. During my time fighting for Slavic survival I had a real blast and Supreme Ruler made me think…a lot.

I played many other games after that first one, and got a little better each time. One of these days I may even survive the entire war. Getting out of Yugoslavia, I also tried my hand at France, Germany, the United States and Japan, as well as some minor countries that didn’t have much to do with the war, but who played a bigger role when I was in charge.

In the sandbox mode, everything was still quite realistic thanks to the great computer AI. Historical mode play gives players the gift of foresight, since we know generally when things are probably going to happen. Even then, it’s not exactly an easy road, but at least you know things like not trusting the eastern fortifications completely as France or Hitler at all as Russia.

Overall, Supreme Ruler 1936 is a huge success, earning an outstanding 4.5 GiN Gems. With strong graphics, a brilliant diplomacy interface, tough AI and historical accuracy, then if you are looking for a way to invest some good times in World War II strategy, this is a great way to do it.