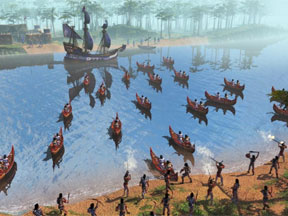 Age of Empires III: The WarChiefs

When Age of Empires III came out, it really stuck a cord with gamers looking for something a bit new in the real-time strategy genre. Seeing an RTS in the colonial period was certainly unique and the graphics were simply gorgeous.

But while AoE III had tons of re-playability, nothing lasts forever. That is, unless game companies come out with expansion packs to keep their titles fresh like the new War Chiefs one just released by Microsoft and developer Ensemble Studios.

First off, all the advantages of AoE III including incredible graphics and great sound are all in there. Considering you need the original AoE III game to play the expansion pack, this is no surprise. So let’s concentrate on what is new, and what you get for your money.

The most important and significant update is playable Indian nations. In the original AoE III, the Indian nations were pretty much passive as the Europeans battled it out in their territory. You could build a trade post and recruit Indian fighters to your cause, but one wondered what the people who were there first thought about all the warlike new arrivals. Now, you can play as the Indians and either fight other tribes, or do your best to push the Europeans back into the sea.

The three new playable Indian races are the Iroquois, Sioux and Aztecs. Like their European counterparts, each nation has unique strengths and weaknesses. The Iroquois are probably the most like Europeans, and even incorporate cannon as part of their armies. The Aztecs are all infantry, with some of the most powerful hand to hand fighters in the game. The Sioux are probably the most interesting as they start with a population cap already sitting at 200, and never have to build houses as a result. But these nomadic people don’t have access to siege equipment, so it’s probably best to attack with them early in the game before the others begin to fortify.

Native Americans also have access to a unique Fire Pit building. Assigning villagers to dance around this special fire can create magical effects. You can get more experience, spawn extra troops, give your warriors more power or buff up your warchief. Effects are increased with more villagers dancing. However, dancing villagers are not out gathering food, gold or wood, so you need to be careful how many you assign to the dance.

The leader of each Indian tribe is a bit different than the European explorers. In many ways, they are more powerful. Instead of killing a treasure guardian with a well-placed rifle shot, the warchief can tame the beasts. Then even if there are multiple guardians it becomes a fight between your tamed animal, yourself and the non-tamed beasts. Each new guardian gang you encounter increases your "army." You can also train animals yourself by spending food points, leading to a powerful early force that no European explorer can match.

The European nations are not left out of the enhancements either. You can build a new building called a Saloon that gives each player access to unique mercenary units like gunslingers and ninjas.

As a European, you can even declare independence from your home country. Doing so gives you access to a new home city that can only ship four things your way: Militia, Gatling Guns, Iron-clad ships and unlimited Fort Wagons. You can no longer train villagers, but can continue to train settlers. It’s a neat and very militaristic twist.

There are also several enhancements to the game itself. The addition of treaty games was sorely needed. This prevents any combat for 10, 20, 30 or 40 minutes while you and your enemies build up. That’s perfect for turtle players like me who enjoy making vast fortresses, though again, this plays into the European hands more than the new Indian nations.

There is also a new win condition called a trade monopoly. This happens when you own more than half the trading posts in the game. A counter begins ticking down and if your opponents don’t destroy one of your posts before the time is up, you win. This is a lot like the world wonder victory in the original Age of Empires, you know, the one set back in the Stone Age.

There are also a bunch of new maps which were really needed considering those of us who played AoE III a lot had the old ones memorized. These new maps range from very small to huge, and offer all kinds of new terrain-type challenges.

In addition to the multiplayer enhancements, there are also 15 new missions in the single player story-based campaign following the Black family as they head out West.

The War Chiefs really expands the AoE III world. It’s one of the best expansion packs we have experienced and is well worth the money for both experienced AoE III players and those that want to get started with the game with a bit of an additional bang.