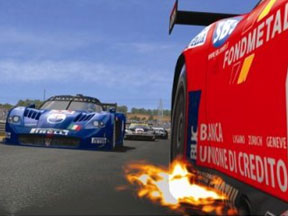 When GTR came out for the PC last year, I had no idea of how good a racing sim it could be. After being bored to death with the simplistic GT style racing of Sony’s Gran Turismo series, it felt good to actually play a GT racing sim that not only looks amazing, but plays well, has a large car grid (six cars is so 90s,) and features challenging AI.

Needless to say, 10Tacle Studios had a hit on their hands. Since then they have also released a classic version called GT Legends that featured GT racers from the 60s and 70s.

With two excellent racing titles on their resume, 10tacle and Viva Media continue the great tradition of racing titles with GTR 2. And for those who enjoyed their past works, strap on a seat belt because while you will feel right at home dropped into this realistic racing world, you are going to want protection so you don’t get whiplash.

For starters, the number of cars has actually doubled, featuring 140 vehicles from all the GT classes. So whether you like the slower performance cars or the speedy rockets where a slick part on the road will send you flying like a broken carnival ride, there is a bucket seat are setup for you.

And the number of game modes has also increased. In addition to the open practice, time trials, race weekends and championship modes of before, there are also full 24 hour endurance races and a driving school mode, teaching all of the aspects of becoming a professional GT racer. Personally I found the driving school very helpful. It teaches you all the aspects and tricks to becoming a professional driver and then lets you try them out in the hyper-realistic environments. And even the school is never boring. If only real driving school had been this much fun!

The most impressive feature however is not actually the graphics, which are amazing, but the racing AI. The computer drivers are all extremely smart, so much so that you might think you are racing real people. The days of rubberband AI or pack racing AI will be a thing of the past once people become addicted to how games of this class are supposed to work. We now have a humanlike AI that is even capable of making mistakes. Considering that even the world’s best racers make a mistake every now and then, its nice to see that this was incorporated into the game.

For GTR2, 10Tacle went all out in making the racing experience as authentic as possible. Vehicle cockpits are designed according to team specifications, and all physics are professionally designed based on real life telemetry.

And if you remember the realistic weather patterns from the first game, you won’t believe what they have done now. Besides rain hitting the windshield and other amazing environmental effects, the race conditions can radically change if the sun goes behind the clouds and rain starts to fall. Getting sun blinded on the back straightaway is bad enough, but try going 180 on a slick surface. Tracks now change dynamically based on weather conditions and even will subtly change based on the road’s wear and tear experienced during a race.

And speaking of wear and tear, don’t slam into a wall or even another vehicle out there, because you will get realistic damage to your car. And like the weather, this is not just for looks, car performance can be changed in dramatic and subtle ways if you do something like knock your alignment out of whack or even damage a tire.

Those of you who like to get under the hood will be happy with GTR2 as well. You can change every aspect of your vehicle from tire pressure to gear ratios and almost everything in between. Think you can tweak your vehicle into a winning run by fixing the engine up "just right." Feel free to give it a try. You can ignore this part of GTR2 and go with the default settings, or if you choose to play with it, it’s good enough to almost be a separate game about auto mechanics.

And thank you, because once again, 10Tacle made GTR2 accessible for everyone, whether players are professional racers or haven’t yet stepped behind the wheel. With three difficulty levels, adjustable AI levels, and eight driving assists, no one is left behind. Let the computer shift gears for you if you want, or even apply the brakes if you are going out of control. You won’t get as many points for the race, but you can certainly win your division within the chosen difficulty settings.

And although I have said this before, its worth mentioning again. The visuals of GTR2 are gorgeous to look at. I’m not saying the original was ugly in any way, it’s just that everything has improved significantly as a result of the brand new DirectX 9 engine. Real world lighting effects add a deeper sense of realism. Even when the graphics are turned all the way down they are still a beauty to behold. The same can be said about the on track audio. While the music could qualify as generic race menu music, the cars themselves sound as great as their real life counterparts. (The GTR team went out and recorded the actual engine sounds for each car, so expect either a deep rumble or a throaty growl depending on what the car would sound like in real life.) The whole environment sounds like it truly came from a European GT racing circuit.

And once again, in addition to accessibility in terms of difficulty, the same can be said about running on almost any system. While 10Tacle recommends a 3 GHz PC with 1 GB of RAM and a 256MB graphics card, I was able to run it smoothly on my 2.6 GHz laptop without any freezes or stuttering at all.

Needless to say, 10Tacle has done it again. They have certainly mastered creating a realistic and enjoyable GT racing experience, and I am looking forward to seeing how they can translate their success to the Xbox 360 platform next year.