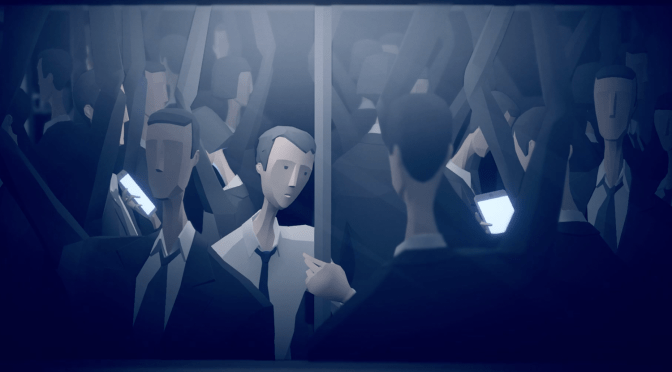 When I first got wind of Mosaic, I had heard it was a puzzle game that was a little atypical. Having played it I can say it is much more than that – it is a statement. A statement on what, you say? Well, I will get into that a bit later.

Mosaic starts off as many puzzle/adventure games do, with your character in some sort of weird underwater dream before he wakes up. There are a lot of these as the game progresses, but there are all different, and help give some insight as to what your character is going through.

The character you play is a working-class schlub who sleeps in his work clothes and never seems to fit in anywhere. Since the world he lives in is a corporate nightmare where everyone seems to only care about getting to work on time and advancing, not fitting in is a good thing.

The interface is simple. To interact with something, mouse over the little white hexagon that appears when your character is close enough. Text appears describing what the result will be, and then you can decide whether to click on it. One of the first thing is your phone, which you can pick up and turn off the alarm.

The phone has messages and news to read, as well as apps that you will occasionally accumulate. The one that you start with is a ‘game’ called “Blip-Blop.” The developers have managed to make a minigame that is, like most social media-driven games, at the same time mindbogglingly boring and alluringly addictive. You just click the “Blip” button to earn a “Blop.” When you have enough Blops you can buy upgrades that makes the “Blip” button earn more. That’s it. Yet, this little bugger managed to make me spend almost as much time on it as the actual adventure game.

Anyway, back to the game proper. You make your character go through a morning routine before finally sending him out the door to work. You walk to the elevator, through the lobby and out on the street. The game forces you to go through this stuff each and every day to drive home the character’s gray, near-meaningless existence. Though on different days it will highlight on a different part of the journey.

At some point you will be offered a detour. I think you have to take it, but given the character’s life I personally jumped at the opportunity every time. In the detour you will encounter some sort of puzzle-like obstacle, such as a maze with weird rules. Once you get through that you encounter a street musician (who, according to a news story was about to be made illegal) and get a brief spiritual respite before having to get to work.

Work is just as soul-crushing as anything else in this world. Each day you have to achieve a milestone that is assigned as a meaningless number. To do this you need to play a puzzle game where you conquer hexes and try to work your way up to the goal. At the bottom you have resource makers that send pulses up through the path you made to try to convert the new hex, which resists. If the path is too long, you need to go down to the bottom and take over more resource generators. There is no score, time limit, or anything else, just messages to your phone saying how inefficient you were.

Once you have achieved the milestone, you end up in another dream before waking up and doing it all over again. This is as eloquent statement on modern civilization as I have ever seen. Fortunately, things start to change as you progress, so your routine is never exactly the same. Things take a surreal turn, and eventually if you stick with it you manage to arrive at a happy ending for the character.

The graphics are mostly gray and try to be depressing as heck, but I found them to also be oddly beautiful. And when color is used it seems even more vivid. The music is soothing and orchestral, providing a mood of resigned complacency, but slowly turning into one of hope. Even the sounds of Blip-Blop are pleasant and make you want to play more.

Mosaic is a beautiful game as well as being a thought-provoking statement on how society sometimes treats us. I found it to hit me in all the right places, and give it a well earned 5 GiN Gems!