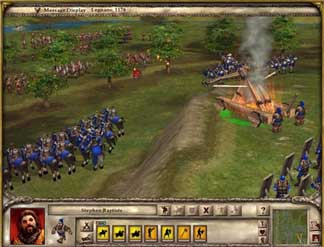 Lords of the Realm 3

Have you ever had the unique experience of visiting the old neighborhood where you grew up at and learning that everything has changed, and not for the best? That is kind of how I felt when I started playing Lords of the Realm 3. Having grown up playing this awesome series I was overjoyed at the release of Lords 3, though my joy quickly turned sour when I saw what the developers had done with a formerly impressive series.

Granted it has been eight years since Lords 2 came out, so you have to expect change. But not like this.

Before anyone accuses me of having something out for Impressions or Sierra, stop. I have always enjoyed Impressions titles and grew up playing mostly Sierra games on the PC. I really, really tried to like Lords of the Realm 3. I read the included manual cover to cover. I printed out the online manual, which is much more detailed, and read it cover to cover. I even scoured the message boards trying to find a patch that would fix things, but to no avail. Try as I might to deny it, I have to tell you that the emperor has no clothes.

If you purchase this game, even at the $20 value priced level it surprisingly shipped at, you are probably going to be disappointed. And that is too bad, because it is mostly gameplay flaws and minor things that bring this title to the ground faster than a stone launched from a trebuchet.

The basic premise of the game is that you get to be a king. And you are a real king, not the Donald Trump kind that micromanages everything. You have parcels of land within your kingdom and your primary job is to pick the right vassal to run those lands. If you pick a knight, he will construct a small castle and begin to raise an army for you. If you pick a serf, he will turn it into farmland. A burgher will make a town. And a member of the clergy will construct a church.

Each vassal has different strengths and weaknesses and skills. As you conquer more land and gain more fame, better vassals will offer to serve you. You have to maintain a good balance within your country to ensure a strong nation and a formidable army. Farms are needed to feed your troops. Churches raise your Christianity and improve production, and towns and cities make money that can be used to build better castles or hire mercenaries.

This part of the game is actually a lot of fun. Choosing exactly how to setup your kingdom is highly rewarding, and watching your parcels of land turn into perfect components of your overall empire is satisfying. Some people on the message boards complained that this part of the game was too boring, but I like this and think Lords players used to intricate planning of resources will as well.

But I know where the complainers are coming from. It all stems from the concept of time management in the game. There is none. The developers beat their chests and laude the fact that you can’t control the flow of time in the game, but while this is an interesting concept, it’s so poorly executed here that the game quickly becomes annoying. The way it is executed here is also seriously flawed.

The game challenges you watch over your entire lands. If a battle occurs, you can step in and take control of it, but since the clock is always ticking, concentrating on one battle can mean not seeing several other enemy armies marching past you unopposed.

Even when you are looking at the diplomatic options you can propose between nations, which are extremely limited anyway, the mysterious clock keeps running at its own pace.

This is where the time management concept is flawed. Nothing is relative. In the time it took to manage one battle where a group of my knights charged across a field to attack some mercenary peasants, enemy armies marched all the way across England and started sacking my fields and cities. The battle in the real world should have taken no more than an hour. The other enemy armies would have taken weeks to travel that distance. Yet the game is basically lost because I decided to play one battle myself and not have the computer fight it for me.

The artificial intelligence uses this concept to gain an unfair advantage in every scenario I played. They simply send a bunch of tiny armies into your lands at the same time, mostly cheap mercenaries. And depending on the geography of your kingdom, you simply can’t stop them all. You intercept one and either wait for the computer to manage the battle, which takes several minutes, or you manage it yourself which takes almost as long. Meanwhile most of the junk armies get through, march 100 miles into your back lines in the time it takes you to lop off an archer’s head, and destroy all your valuable lands.

Not only is this not fair, but not historically, or even scientifically accurate at all.

The AI is also pitiful in battles. When you are singeing a castle, the enemy AI simply lines up at the front gate and waits for you. Even if you start banging away with catapults on the back wall, they won’t move a finger to stop you. Once the wall is breached, they all flood out and it becomes a land battle anyway. So attacking a castle, what was one of the most fun things about the original Lords series, is not much fun here. It is just a way to slow you down while the computer’s armies march to heck and back around you.

Once you take over a castle, you often can’t move in because all enemy armies have to be defeated, even the ones hiding out in the countryside of that plot. Guess they are holding the deed to the castle or something. So the computer simply sends waves of cheap armies to stand around, preventing you from taking over the castle you just defeated. I’ve even had them re-garrison the plot while I was trying to squash all the throwaway armies they pushed my way. Again, this is not only frustrating, but not accurate at all.

The sting in the tail is that the game’s graphics are beautiful and the soundtrack is really awesome. It makes you want to play the game. It makes you want to keep trying to make things work because if they did, this title would be so good it might even be in the running for a game of the year award. But like a bad relationship, sometimes you just have to cut ties and admit defeat. The one saving grace of the game is the $20 price tag, but a cheap pile of crap is still a pile of crap. You just have a little less buyer remorse.

If anyone on the development team is listening, here are the items that could fix your game with a patch and make Lords 3 on par with its predecessor brethren. The AI has to be a lot better, especially when attacking or defending a castle. Also, don’t force formations to attack the dead center of enemy lines, otherwise, why have a formation if it will end up a giant clump in the middle? Let vassals move in immediately if you defeat a parcel of land. You also have to be able to control the flow of time to avoid boredom at various points. Also, when running battles, or looking at the diplomacy screen for that matter, the game has to pause or SIGNIFICANTLY SLOW. Think relative time frames, even though we are playing a pre-Einstein era. Do these things, and you will have a stunningly beautiful title that actually plays well.

Playing multiplayer games at least puts everyone on the same playing field, though it won’t help with the poor AI in battle performance. Lords of the Realm 3 earns 2.5 GiN Gems, pulled up somewhat by the awesome graphics and sound, but far, far short of the success of its predecessors.