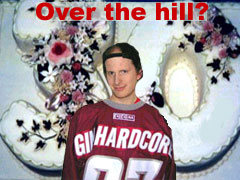 Getting older is not fun. I would do anything to feel younger. I still watch cartoons (even if they are more adult and lewd ones like South Park and Stripperella), enjoy juvenile humor, and even go back to my college campus from time to time. I detest being called "Sir" by some pimply faced teen, and am flattered when I am asked to show my ID.

Sadly that doesn't change the inevitable. Last Sunday I turned the big 3-0, and I already feel much older. Even with my girlfriend driving all the way from North Carolina to celebrate it with me, I still dreaded reaching this milestone.

Nonetheless, I stuck with my old fashioned ways, even with my gaming habits. When I go to Dave & Busters (a local arcade and sports bar) I play the classic re-releases such as Space Invaders and Missile Command.

At home the classic bug kicks in. Even now, as we are in the time of year when new titles are coming at a trickle, I have been going back to the classics. Emulators such as MAME have become a standard daily routine for me, and also I have been going back to the Game Boy Advance to relive some of the greatest titles ever made, as well as updates to some of my old favorites.

That love of GBA remakes came to its highest point ever, when I obtained a remake of the 1989 NES cult classic River City Ransom. RCR had always been on my list of my top five games of all time (along with the likes of Gyruss and the underrated Genesis masterpiece Gunstar Heroes), and to see a remarkable title reborn on the Game Boy Advance was a sight to see.

Of course, there are those online who would shut a good remake down. Take a look at our old friend, Jeff Gerstmann, and his gall to give RCR a 6.9, claiming that "nostalgia can be a very devious thing." I'm sorry Jeff, but to some of us, Tony Haw's Pro Skater is not considered nostalgia, but then again that's the only game you'll ever give a 10 to.

But I digress, we can simply say that Gerstmann is not a fan of this classic. Others like myself will fall in love with it (I know I did) because it brings back memories of a genre breaking title (for the time).

The GBA is becoming the premier choice for retrogaming, be it arcade, NES, and even SNES titles, but Nintendo is taking it one step further. On June 7th, Nintendo will be releasing a special design GBA SP based on the classic NES controllers. In addition, they will be releasing a classic lineup of the most popular NES titles: Super Mario Bros., Excitebike, Donkey Kong, and the Legend of Zelda to name a few.

To enhance the classic experience, even the packaging is designed to resemble the old NES boxes. Seeing these old titles makes me feel like I am 13 again (the age when I got my NES).

While turning 30 sucks, it feels good to see classic games being brought back, and even designing a GBA SP to look like an NES controller makes that experience even better. Perhaps being 30 is not so bad afterall.