You can probably tell that it’s almost October. When games like The Mortuary Assistant, Cursed to Golf, and I’m On Observation Duty 5 start appearing on the GiN front page, then you know that it’s getting close to that spooky time of year. Ikai fits right in with them. 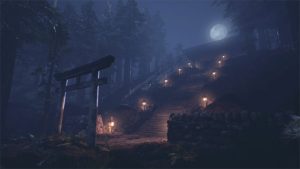 Ikai is a first-person horror game centered around Japanese folklore. You play as Naoko, a young girl who is left alone in a village as her uncle travels to another nearby village. The story starts out innocently enough. You are cleaning the shrine and doing laundry before nightfall. However, while traveling outside of the village walls to the nearby river, you stumble upon a knife and a bowl. Upon picking up the knife, you accidentally cut yourself and pass out. Upon awaking, you realize that something has gone terribly wrong. There are now monsters as they have somehow awoken.

The rest of the game is spent solving puzzles and writing seals to destroy the evil creatures. A plot twist at the end reveals why these creatures are attacking you and what you must do to stop them.

I was not a big fan of Ikai. While horror games are not really my thing (I always think I’m going to like it, and then the first scary thing happens and I’m out), my husband, Neal, has reviewed dozens over the years. He was not a big fan of Ikai either. I say this to prove that my adversity to horror games is not why I don’t like Ikai. And despite not liking horror, I am a big fan of folklore. I was excited about Ikai because of its focus on Japanese folklore, but the game does more telling than showing. 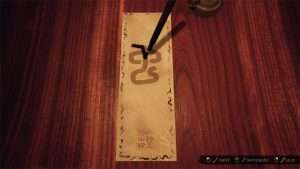 Pages of encyclopedia type information on different monsters are spread throughout the game, but the only time you are confronted with these creatures are jump scares, so you barely get to experience the folklore itself. There are a couple creatures lurking about that you have to hide from, but the majority of the horror just comes from jump scares.

The only time I felt like the horror was done properly was at the beginning when you have to seal the evil inside a mask. The cupboard containing the mask emits overlapping hurried whispers as you approach. When you pick up the porcelain mask, the inside of it shakes and is enveloped in a black covering. There is another small bit towards the end where you are trapped in a room. The table is violently overturned toward you, and a floor lamp starts spinning widely while there is a loud thumping at the door. I wish the game leaned into more moments like this than cheap jump scares. 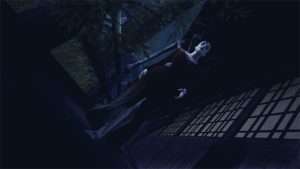 The majority of the gameplay centers around running away and hiding from monsters, solving puzzles, and writing seals. Ikai is also brief in its duration. Many players are able to complete the game in about an hour. I think there are only four puzzles in the entire game. The puzzles aren’t really challenging, but they are confusing. The two puzzles at the end seem to be solved by brute force or trial and error. The seal writing can be challenging at times, especially with the threat of a monster jumping out at you, but after the first half dozen times it just becomes an annoying inconvenience. Between its brevity and the lack of real challenges, Ikai really isn’t that fun, and there is next to no replay value. 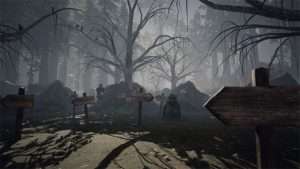 The only reason I stuck it out was because I was curious about the plot, but that quickly became a disappointment as well. The story takes place in one night in an abandoned village. I say village, but you get the impression that only Kaoko and her uncle have been living there. The plot is primarily conveyed by Naoko’s awkward narration. Some of what Naoko says doesn’t even make sense, and she often hints at something but doesn’t go into any further explanation, so you’re left wondering why she even said anything at all. 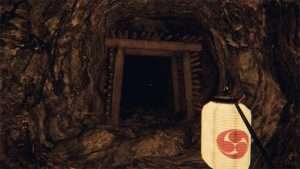 I don’t want to spoil the ending, but let’s just say the majority of the plot is revealed in two large letters towards the end of the game. I also didn’t find the conclusion of the plot satisfactory at all. Naoko’s solution to the monster problem was most likely deeply rooted in the feudal Japanese culture the game is set in, but even so it wasn’t properly conveyed. I can’t speak for present day Japanese culture, but from a western point of view, the solution was a bit of a letdown. 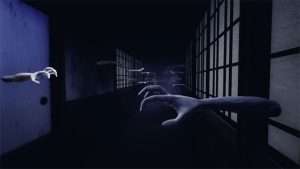 The graphics are just meh. They’re pretty standard, but everything is dark and muted. The monster designs are creative, if a little cartoonish at times, but you really only get a glimpse of them as they come to rip your heart out. The audio on the other hand is really good. The floorboards creak constantly and much too loudly, and you can often hear scratches and scampering nearby. The sound effects do a good job of keeping you in suspense as you navigate the many halls and rooms in the village.

Overall, Ikai earns 2.5 out of 5 GiN Gems. It has a lot of potential, but unfortunately falls flat with its execution. With the brevity of this title, the choppy, convoluted plot, and lack of real horror, Ikai leaves much to be desired.