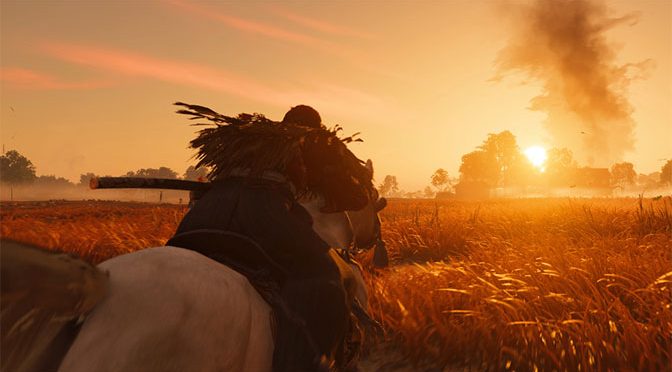 When talking about the Director’s Cut of the Ghost of Tsushima game, we have to acknowledge that the core game was already pretty amazing. Our reviewer Marie Flanigan awarded it one of the only perfect review scores last year, and it is well deserved. The director’s cut optimizes the game for play on the PlayStation 5, adds a cooperative Legendary Tales mode, and also adds in a completely new island and storyline for single players to explore and enjoy.

For those of you just getting in tune with Ghost of Tsushima for the first time, the game follows a young samurai lord named Jin Sakai. He dutifully assembles with his clan and other warriors at the beach when an armada begins discharging Mongol warriors hell bent on invasion and conquest of their island home of Tsushima. The island is seen as a stepping stone before the Mongols move to attack the rest of Japan. 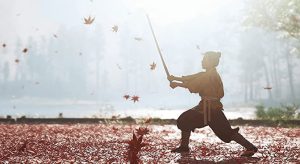 Unfortunately for those living on Tsushima Island, it’s apparently considered a bit of a backwater place compared to the rest of 13th century Japan. As such, there are no huge armies or defense forces stationed there. Instead, Jin and about 80 other samurai, along with a few auxiliary and mercenary troops, are tasked with leading the charge against a huge Mongol force. Outnumbered something like 20 or 30 to one, they all fall in battle, other than hour hero Jin. He actually does fall, but is rescued from the battlefield and nursed back to health by a woman who needs his help, though she eventually also becomes a trusted companion as well.

All of that happens in the very first part of the game. Then after a small tutorial section, you are pretty much released into the open world of Tsushima Island to explore, tackle missions, partake in many side activities and generally find and stir up trouble for the invaders as you work to try and slowly liberate your home. Here is the original trailer to get you caught up on what the core game has to offer, as well as a link to our original review.

When the original game came out, it was beautiful. The director’s cut running on the PlayStation 5 however, is something next level. I have never seen a more beautiful game on a console. The atmosphere is so absolutely gorgeous that it’s hard to describe. All of the plants sway in the wind. Clear steams dribble over cool rocks. The sun sets in a beautiful pink or crimson explosion of color, and the pale blue moon slowly rises over the soft landscape to take its place. Meanwhile, fireflies or sometimes butterflies flit around in the distance while cherry blossom and red maple leaves gently float down around you, joining their brethren in a vibrant forest carpet. Ghost of Tsushima is almost like looking at one of those beautiful, stylized paintings of idyllic Japanese landscapes, only it’s a living world that you can now explore. 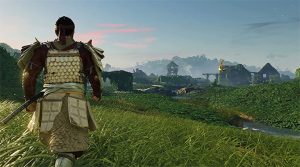 Of course, this is war, so there is ugliness too. The Mongols are comically evil in the game, stringing up dead peasants from trees, burning people alive, and looting both homes and sacred places. It’s almost as if the Mongols are being led by one of the gangs from Fallout 4, but I suppose this gives you a reason to hate them beyond what happened on that bloody invasion beach. 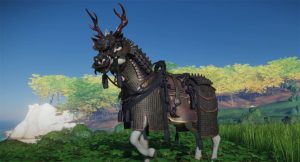 Thankfully, Jin has many skills that he can use to hunt down the invaders. He’s lighting fast with his katana, and almost as deadly with his tanto dagger. As you adventure, you will learn up to four stances, with each one being particularly useful against a certain type of enemy. That is not to say that you have to switch stances depending on who you are facing, as that is difficult to do in large battles when there are lots of enemies surrounding you, but using the right stance gives you a huge advantage. For example, if you happen to be using the water stance, then you will cut through enemy shields like paper. You can still kill, for example, spearmen, but are better off facing them using the wind stance. A good strategy, if you don’t feel like constantly switching stances, is to try and pick the stance that gives you an advantage against whatever enemy type personally gives you the most trouble. 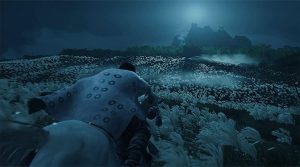 One of the coolest parts of the game is the fact that Jin can challenge his enemies to a standoff. This is where you stand perfectly still and the enemy tries to fake you out with feints, but eventually attacks. When that happens, you make Jin leap into action and perform an instant kill. At higher levels, you can repeat your instant kill attack up to three times in one standoff, thinning the ranks of Mongols or bandits and even panicking those watching the encounter, giving you a few more seconds of unblocked attacking. Here is where the upgrade to the PlayStation 5 also shines. The responsiveness of the new console is perfect for a deadly standoff minigame. You can literally wait until the very last instant to react and counterattack, and never get lag killed.

All of the amazing side missions from the core game are present in the Ghost of Tsushima Directors Cut. So, you will be composing haiku poems, reflecting on life as you soak in steamed bath pools, practicing your swordsmanship on bamboo cutting blocks, following foxes to hidden shrines and helping almost every single person you meet with their problems. It’s just that with the director’s cut, everything looks better and reacts more smoothly, especially if you are playing on a PlayStation 5. 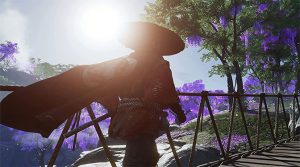 In terms of bona fide extras, there are two main features that beef up the director’s cut of Ghost. The first is the addition of Iki Island, which is an entirely new map with its own storyline. You can go there after you complete chapter one of the main story, whereupon you hear rumors of a Mongol presence on the other island and can go there to check it out. Given how fun the main game is, getting a whole new island to explore, along with a great new story, is a real treat. And, just so you know, the new story is every bit as compelling as the one from the main game.

The second extra in the director’s cut is the new Legends mode, which adds cooperative multiplayer to the game. How Legends mode works is that players can start a Legends game from the title screen, or they can visit one of the many Legends storytellers positioned around the map in the single player game to access the new mode. Actually, the storyteller is supposed to be the same person, a blind poet, but he appears all over the place so finding him is never a problem.

There are four character types that you can play in Legends mode, and they basically take up the typical slots and roles from other multiplayer games. So you have a melee fighter or tank type, an assassin, a ranged hunter and a support/summoning type character. The plot of Legends is that Oni demons rose up in the chaos following the Mongol invasion, and dead samurai heroes have risen up to fight them as ghosts in this secret war.

Up to four ghosts can partake in the missions, which are well constructed and combat-heavy. You can tackle them by yourself, but doing that is very difficult. And there is really no reason. The matchmaking is pretty flawless. We always found a group to play with in very little time. Also, the single player game is paused while you play Legends, so whenever you are done there, you can drop right back into it wherever you left off. 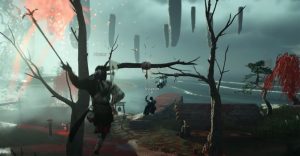 And just for icing on the cake, you get haptic feedback with the director’s cut. So on the PlayStation 5, the sword fights and bow shooting feels more realistic, and you can also activate Japanese lip syncing for a truly authentic feel to the game.

The Ghost of Tsushima Director’s Cut is one of the best PlayStation 5 games that you can play right now. Even with the Iki Island expansion, Ghost is smaller than Assassin’s Creed Valhalla (especially if all of Valhalla’s seemingly endless expansions are considered) but there is also far less empty space in Ghost. 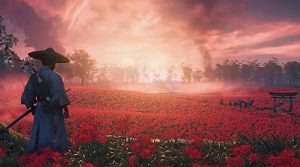 We never ran or rode too far through Ghost of Tsushima’s countryside without finding an interesting activity to partake in, or at least a rowdy group of Mongols who wanted a standoff swordsmanship demonstration. In fact, we never really got bored playing Ghost of Tsushima the entire time we spent with it. It’s an amazing game to play, and looks ridiculously beautiful at the same time. Adding more epic single player content and a multiplayer mode with the director’s cut just gives us more of everything.

The core Ghost of Tsushima game earned a perfect 5 GiN Gem score, so we can’t improve on that. But trust me, the director’s cut makes that perfection even better.