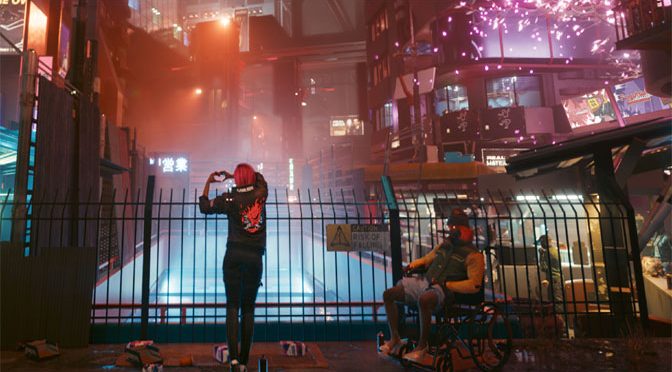 As I am sure that you all know, Cyberpunk 2077 has had about the most troubling history of any game released in recent memory. The hype for this game when it originally came out back in 2020 was intense, with events like Keanu Reeves making a surprise appearance at E3 (he plays a major role in the game in case you didn’t know) ratcheting up the anticipation like no other title. And then when the game was finally released, it was sadly riddled with bugs. Beyond that, and this is the more unforgivable sin, it was pretty much unplayable on either the PlayStation 4 or Xbox One. 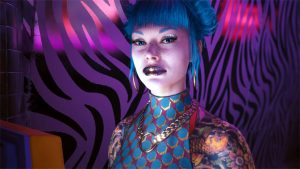 CD Projekt RED was revered by gamers before Cyberpunk. They were always so gamer-friendly, doing things like releasing dozens of free DLC packages for Witcher 3 players. And then almost overnight, their reputation plummeted. Players who wanted to jump into Cyberpunk 2077 on the PS4 or Xbox One rightly felt like they had been lied to about the quality of the game. I tried to play it on the PS4 at launch. Honestly, there were better looking and better-playing PlayStation 3 games. There was no excuse to try and release Cyberpunk 2077 in the state it was in at launch. CD Projekt RED had to know how bad their game played, but choose to release it anyway. 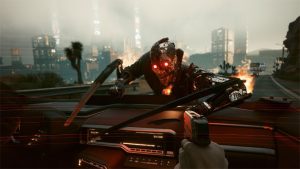 Putting the past aside for now, I was able to review the game on the PC through the Steam service back in 2020, about the time that it launched. I found the game to be pretty fun. Yes, there were bugs, and some of the controls were clunky at best, but at least you could play the game. And running on a high-end gaming rig, it looked pretty good. That is why my initial review stated that Cyberpunk 2077’s greatness largely depended on the platform you were playing it on. For PC gamers (with the right hardware) it was a 4.5 GiN Gem game. For PlayStation 4 players, it was somewhere between zero and two GiN Gems. 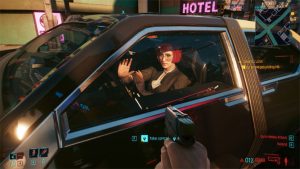 The developer has been bashed to hell and back at this point, and most of those criticisms have been justified. However, giving credit where it’s due, they did keep working on the game. Some people thought CD Projekt would just walk away and call it a failure, but they kept trying to improve things, sometimes in little, incremental patches, and sometimes in great big leaps. That all cumulated in the recent 1.5 patch, which not only fully remade the game for the PlayStation 5 and Xbox Series X platforms to make it a true next gen title, but also improved the gameplay, graphics and stability so that Xbox One and PlayStation 4 players could finally enjoy it. 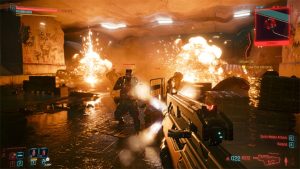 One of our other reviewers, Vincent Mahoney, is currently evaluating the game for the PlayStation 4, and it will be interesting to hear his thoughts on the matter. But I wanted to see how Cyberpunk 2077 played as a true next generation title. So, this review was conducted on a PlayStation 5. Keep in mind that I put in quite a few hours originally on the PS4, so I am intimately familiar with the lackluster gameplay found there during the original release window. In any case, upgrading to the next generation version of the game is free for those who already own it on the Xbox One or PlayStation 4.

So, with great trepidation I loaded up the game on the PlayStation 5. I kept thinking about that old “fool me once…” proverb. But thankfully, I need not have worried.

Cyberpunk 2077 on the PlayStation 5 is amazing. Everything about the game has been improved from the beauty of the graphics to the smoothness of the handling (both on foot and when driving), the stability of the world, the intelligence of the AI, the way the guns shoot and even the load times. My first thought was that I was playing a different game. My second thought was that if the developer initially released Cyberpunk 2077 like it is now, two years later with the 1.5 patch, that everyone would have been thrilled. This is a true next generation game now. 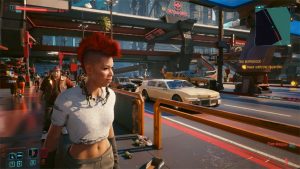 The graphics quality is literally like night and day. Case in point, all those little bits of trash or newspapers lying all over the place, or posted on walls and bulletin boards? Before they were just colorful bits of junk. Now I can read actually them. Many of them seem to be poems or emails, so I’m not really sure why they are there, but others really help to improve the environment, like the food vendor who I now know only accepts Euro Dollars according to his little handwritten note posted on the side of his cart. Even the textures of the world are realistic with the 1.5 patch. Cement has little chips and flaws in in, painted metal beams are sometimes scuffed up or have paint peeling off in places, and even the leather cushions on the ripper doc chairs are cracked and aged. 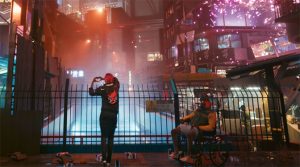 Before, when looking out my apartment window, the skyline looked almost animated, like a Futurama cartoon. Now it looks like a real city. And get this, there is a very slight reflection back into my apartment through the thick glass, especially at night. It’s like I am looking through a real window at a real city. And when you are driving or even riding in a car, Night City finally seems alive. There are all kinds of people out there on the streets, from business like corporate workers to disheveled homeless people. I once even saw a weird beatnik drumming on the top of an old charcoal grill head. At one point, these two tourists stopped to take a picture of a crazy street preacher, saying their friends would be amazed that they were really there in all the craziness of Night City. I had to laugh because I was feeling the same way. I have spent a lot of time just wandering around this now living city, enjoying the atmosphere (and occasionally getting into a fight or a gun battle) and just soaking in the city. Before now, everything felt flat, but it really feels like a real place with the 1.5 patch. 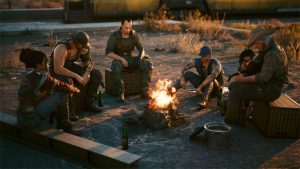 Of course, with the increased horsepower of the PlayStation 5 comes smoother controls. Melee combat is not really my thing for this new playthrough (I am a corporate-background hacker/assassin type build) but I am also pretty good in the ring. And that is not because my personal reflexes are better, but because the game is more responsive now. Blocking at the last second and throwing a counter punch is effortless, with no lag. I find that I can even beat opponents who are pretty far above my level just based on my skill, and I do occasionally throw a punch in combat if someone gets too close or I am out of bullets or RAM units in my cyberdeck.

Load times are way down as well. In fact, on the PlayStation 5, load times are better today than they were for me on the PC before the 1.5 patch. It takes less than 10 seconds to load up a new scene, which only really happens when you load a saved game or use the fast travel locations. 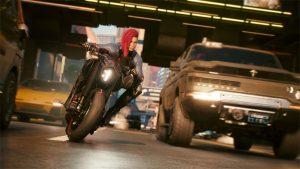 The driving physics are far more precise. Cars now handle correctly, not like they are on ice. And the haptic feedback makes heavy vehicles feel way different than zippy motorcycles too, which is a nice touch. I would put Cyberpunk 2077 on par now with Grand Theft Auto V in terms of vehicle handling, especially with the haptic feedback making cars, trucks and bikes actually feel and handle differently. It’s maybe not as good as a dedicated driving or racing game, but top of the line in terms of shooters or RPGs with driving elements. Before 1.5, I used fast travel a lot, but now I actually enjoy driving around Night City. The scenery can’t be beat, and you are almost guaranteed to run into some kind of adventure along the way if you want to pursue it. 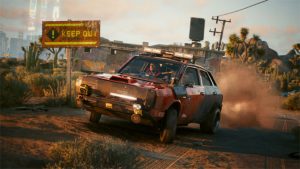 Guns also seem a lot more accurate and fun, or at least are easier to control with precision. With even a moderately powerful scope, you can easily become a precision long-range shooter. Up close, snap aiming works well, and if you have a gun with decently low recoil, putting a lot of bullets on a target feels natural. Here again, the haptic feedback is amazing. Popping off a blaze of rounds with a little Lexington pistol feels a lot different than blasting two slugs from a shotgun into some gutter punk. And the damage those shells can do now, well, it’s not for the faint of heart, or those who don’t like to see too much blood and body parts go flying.  Knife combat has gotten a serious overhaul too, and you can even quietly toss deadly blades with the correct perk (which return to your hand after a few seconds), which should be good news for true street samurais. 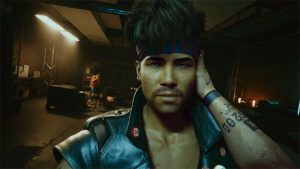 Even the map interface is cleaned up. Missions are color coded now, so you can easily see which points on your map are police missions, fixer requests, side jobs or part of a main story. And the romance paths have also been improved, so your significant others will actually text and call you from time to time, even after you have finished their main quest lines. Plus, you can visit them and get a little quiet time together if you don’t feel like always sleeping alone. All of that should have probably been included in the initial release, but at least we are getting it now.

In terms of true new features, you can finally edit your character’s appearance after the game has started by simply looking into a mirror. I love this new feature more than I thought I would, and often found myself changing out my hairstyle, nails and outfits based on my mood or what was happening in the game. So, your scruffy Nomad can finally clean up once they settle into city life if you want. There are also multiple apartments available to purchase, and eventually the game lets you employ a service to decorate them in different styles. 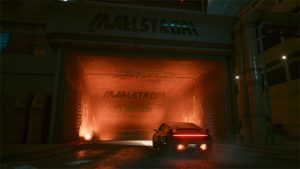 Everything about Cyberpunk 2077 has been improved to the point where it’s almost a different game than when it first launched, at least when running on a next generation console. If you own the game for the PS4 or Xbox One, then upgrading to the next gen version is free. And if you don’t own the game, then the price has dropped to a very reasonable level for a AAA title. Now might be a great time to jump in if you have not yet done so. 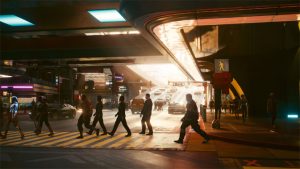 The verdict is still out on if Cyberpunk 2077 is more fun and playable on a PS4 or Xbox One, (Vince will have his review done soon) but for those who now want to try the game on the PlayStation 5 or Xbox Series X, it really does offer an unforgettable experience. I was amazed at how invested I was in the main story and all the side quests once more, staying up very late into the night several times so I could keep playing. This is the Cyberpunk 2077 we all wanted, and while the road to get here has been unbelievably rocky, we are finally here in the glory that is (and should have always been) Night City. See you out there on those mean streets, choomers!