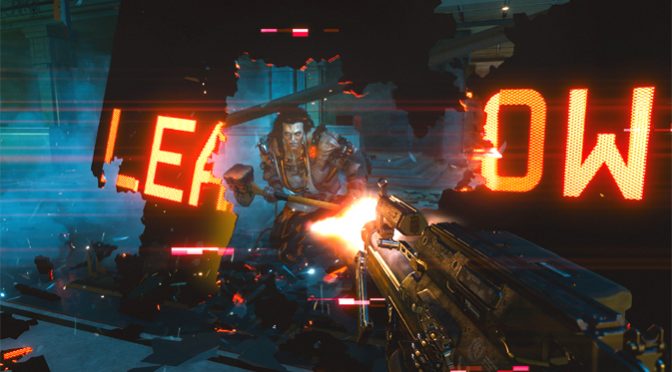 Finally, the most anticipated game of 2020 is released, and we can all enjoy the spectacle that is Cyberpunk 2077. Make no mistake, the game is amazing in terms of both the depth of the world and the way that CD Projekt Red has made a believable, living city for us to play around in. However, it’s also notable that the game is mired in bugs and errors, and is more or less playable depending on the platform that runs it.

For this review, we loaded the game up from Steam and played on a PC where we were able to crank all of the effects and graphical settings up to Ultra. Even so, turning off default settings like film grain made the game look more perfect, eliminating the hazy blur effect that was cast over everything initially. More concerning is how terrible the game looks on the PlayStation 4 by comparison. We also loaded the game up there, and it’s like night and day compared with the PC. It’s so bad on the PS4 that at times we thought we were playing a PlayStation 3 game. Heck, there are PlayStation 3 games that look better than Cyberpunk 2077 running on a PS4. 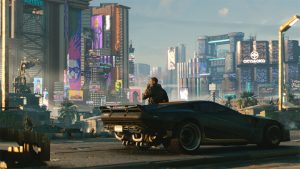 It’s possible that the game looks better on a PlayStation 5, assuming you can actually find one, but CD Projekt Red released the game for the current generation, not as a NextGen exclusive, so its kind of unforgivable that it runs so poorly on the older platform. Now, CD Projekt Red is a great developer. What they did for The Witcher 3 with releasing so many free DLCs and also getting the entire game to run on the less powerful Nintendo Switch (from a single 64G chip no less) is worthy of praise. But we have to call it like we see it, and the situation with Cyberpunk 2077 on the PS4 is simply terrible, and quite a blight on their reputation. 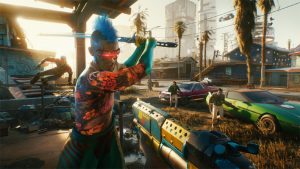 As an example of the difference between the PC version and the PS4, early in the game during the Nomad quest line, you will come across a map of the United States in a customs outpost that shows you how the country is divided up after all the corporate wars, as well as the location in California where Night City sits. On the PC, you can read everything down to the individual states and even see major cities. On the PS4, the map is so blurry that you almost can’t even tell that it’s a map. Later on, when walking around in Night City, people randomly pop into view as if the game suddenly remembers that they need to be rendered. Other people walk halfway through the sidewalk, with just their heads and torsos above ground. None of those bugs are game-breaking, but it really serves to pull you out of the emersion. We might do a separate review of the game on the PS4, but for now, we really don’t recommend anyone play Cyberpunk 2077 with either a PS4 or an Xbox One. Try it on the PC instead or play on a next generation console. 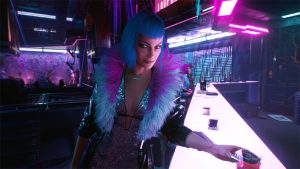 Back on the PC, again assuming you have enough power to drive the ultimate settings, then Cyberpunk 2077 looks really good. They really have created a living city where exploring every little nook and cranny can reap big rewards. There are little side missions hidden down quite a few of its alleys, or at least clues as to the existence of missions. And even if there is not one in that tiny part of the city you are exploring, there are for sure some hidden goodies scattered around. You never know when you might find a great weapon, crafting components, an open node to hack or a discarded wad of cash hidden just out of sight behind some debris, on a rooftop, behind a locked door (that you can use different skills to try and open) or just around the corner somewhere. It’s great when a game actually rewards you for exploring. For much of the game, you will feel quite small (and maybe even a little lost) wandering around in sprawling Night City. 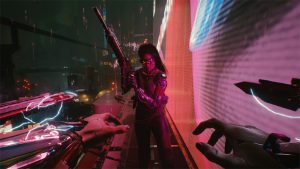 You play as the mercenary named V, who can be male or female, and can choose from one of three backgrounds, a street kid who grew up in Night City’s back alleys, a corporate worker who interacted with the higher classes of people and played lots of murderous cooperation games, or a Nomad who grew up scavenging the badlands outside the city. Each background offers a different prologue adventure to get you into the game. And your background comes into play every now and again too, with unique dialogue options and possible different approaches to missions.

From a role-playing perspective, Cyberpunk 2077 offers a lot of depth. You have six major attributes including things like strength, reflexes and technical ability. And each of them have a sea of perks that you can earn. For example, branching off of strength, you can pick up perks to give you more carrying capacity, the ability to knock people out with your punches or to hold shotguns and automatic rifles steady when blasting away.

To buy a perk, you have to meet the level requirements for your character, the baseline attribute score, and whatever prerequisites you need on that same tree. So you might not get some perks until you reach level 20, or until your reflexes score reaches 12, or both. That means that you will have lots of playtime before you access most perks, and will know which ones will be the most valuable to you.

You earn perks and baseline abilities in different ways. Baseline abilities come when you level up, which you get by completing missions in the game. Perks also come with leveling up, but also by using skills. So if you use your pistols a lot, you will earn perks from doing that. The interesting thing is that you don’t necessarily have to spend earned perks how you earn them. So you might get a perk from using pistols, but can then spend it to improve your hacking. 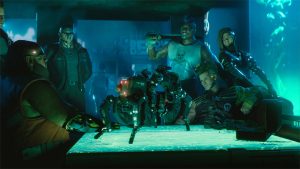 The choice is yours, which makes Cyberpunk 2077 all about building out the “perfect” character for each player, whether that means a stealthy hacker, a powerful street brawler, a versatile street samurai or any combination of all of that. How you play is really fully in your hands, which is nice to find in an RPG.

In fact, the game is all about choice. You have a huge selection of everything in the game, from the wardrobe you wear to the weapons that you use. Each article of clothing and every weapon has different attributes and special abilities, and all of them can be crafted if you have the skills. Cyberpunk is easily a crafters dream come true. Clever artisans can make the best, most customized gear to really augment their character’s abilities and style, giving them more than enough incentive to invest character and perk points into the crafting-related skill trees over someone who just uses whatever they can find (or buy) along the way. And of course, crafting means you totally control your own style.

In terms of size and gameplay length, Cyberpunk 2077 is pretty huge. In the first 15 hours of gameplay, it will throw hundreds of side quests and mini-missions at you. It can almost seem overwhelming. We played the game for almost 20 hours before moving down the main quest line too far, and it was fun without really scratching the surface. If you just do the main quest, you can probably finish the game in about 15 to 20 hours or so. But if you do everything, or even a majority of everything, you can probably play for 100 or more hours easily before you really even know it. 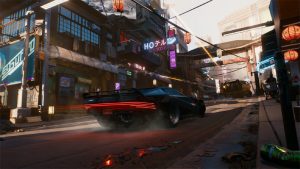 Note that Cyberpunk 2077 is a very adult game. It does not shy away from sexual situations in both the main quest and things like advertising scattered around the world. You even need to configure your character’s penis size at the beginning of the game, or the decoration around your pubic hair if you are playing a female. Night City is very sexual. You can turn off things like player genitals, but the overall world is still a highly sexualized place. Just know that for once, the M for Mature rating really does apply. Kids should not be playing this one. 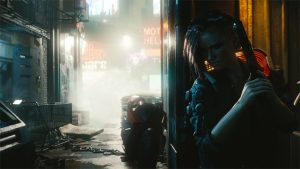 This was a very difficult review to write. For everything that Cyberpunk 2077 does right, it seems like it also does one or two things wrong. It’s definitely a heavily flawed masterpiece. Comparisons will be made to another open world game recently released, Watch Dogs Legion, which we reviewed earlier. Both offer an open world and a living city to play in. Cyberpunk’s Night City seems more alive than Legion’s London, with more organic activities to do. But Legion has so much more polish where Cyberpunk feels almost unfinished or at least heavily bugged in places. Clearly, Watch Dogs Legion is the better game, and it runs great on a standard PlayStation 4 console too, which is a huge plus. 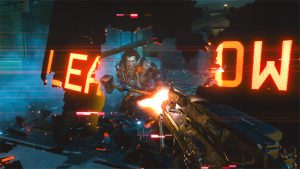 Cyberpunk 2077 can be a lot of fun if you happen to be playing it on something like a high-powered PC that can handle the game’s world. That way, the plethora of bugs are merely annoying. But the state of gameplay on the PlayStation 4 and Xbox One is pretty unforgivable. Cyberpunk 2077 earns 4.5 GiN Gems out of 5 for the PC. If we were to give it a score just based on the PS4 version, it would be more like a 2.5 or maybe even a 2. So yes, Cyberpunk 2077 is a masterpiece, but your mileage with the game will vary wildly based on where you play it, which is not something we expected from this otherwise very impressive developer.