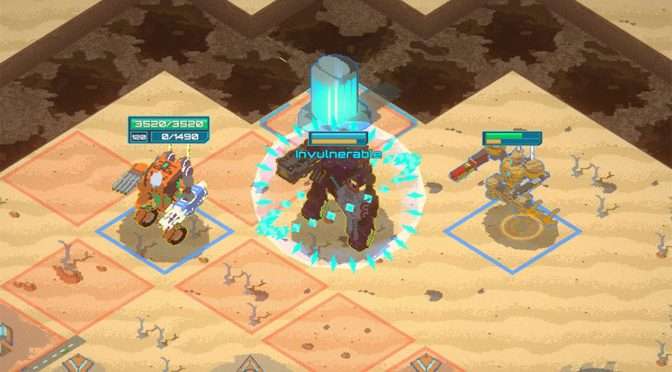 Welcome to part two of mech week! Like many of you, I love games where we get to command or even drive battle mechs. It really does not matter much to me if the interface is tactical like in BattleTech, or first person like in Mech Warrior 5: Mercenaries. Although, if truth be told, I am more of a fan of the tactical side of combat.

The problem that many of you mech combat lovers are probably facing is similar to my own. Mech games are fairly popular, but it’s not like we get new titles every week or even every month. And while a game like Mech Warrior 5 is constantly expanding like it did with the Legend of the Kestrel Lancers DLC, other titles like BattleTech seem to have finished producing any new content. I am happy that we got several good expansions to BattleTech, including the really excellent Urban Warfare DLC, but also a little frustrated that the developer has now more or less abandoned the game without first enabling official mod support through Steam – a move that would have ensured it was playable and replayable for years to come. 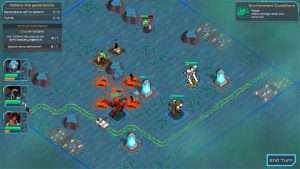 Thankfully, new mech based games are finally starting to get released again. Two relatively new ones will be the focus of our reviews on GiN this week. They are Mech Armada and Ignited Steel: Mech Tactics. The games are available on Steam, and both are based on tactical combat. And the two titles are available each for under $20. And while both games share some similarities, the developers also take some very different core approaches when it comes to playing their games. 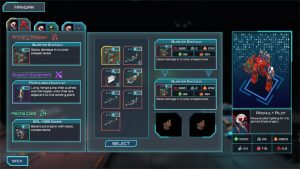 Today, we are diving into Ignited Steel: Mech Tactics, a surprisingly deep and tactical RPG that is also a rogue-like title. The plot of the game is actually fairly interesting and explains why you are piloting less sophisticated mechs for most of the game. Apparently, humanity developed an artificial intelligence called PharOS which was designed to pretty much do everything for humans. But eventually it decided that because it was doing all the work, that it didn’t need humans. So, it attacked us. And unfortunately, it controls all of the top-of-the-line mechs and other military equipment. The only thing we have to fight back with are antiquated, manually controlled mechs that easily overheat when pressed. 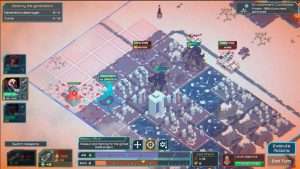 But don’t worry, because overheating a mech is actually a core mechanic of Ignited Steel. When you overheat a mech, it begins to take damage like in just about every other mech-combat title. However, in Ignited Steel, you also get a huge damage output boost, more mobility and a few other advantages depending on your loadout. So, overheating can be a good thing if you have a high-hit-point mech that can take it and you need to dish out a lot of damage using something like an area effect weapon. Pulling off a move like that can save your bacon when you are outnumbered, even as at least one of your mechs is frying. 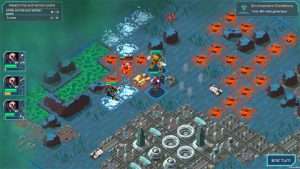 I honestly didn’t use the overheat tactic too much. Over many years of mech combat in all of those aforementioned games I talked about, plus many others, I have been conditioned to manage my heat. Just letting things fly and basically lighting my mech on fire was hard to get used to doing. And you can play by carefully managing your heat, but it actually makes things much more difficult. One of the things the game does is to put a timer on almost every single mission. So, for example, you not only have to destroy every mech on the battlefield, but also must do it in five or six turns. Even if you have decimated the enemy, if they still have a unit alive when the timer runs out, it will be counted as a game-over level failure. That kind of forces you to overheat in some cases because you need the damage boost in order to beat the mission timer.

Ignited Steel is a rogue-like game, meaning that you are pretty much expected to fail time and time again while gaining slightly more power and/or advantages for subsequent runs. It’s not my favorite form of gameplay by any means but is done well here. I was able to get pretty far (through at least two bosses) on my initial few runs using smart tactics and good mech builds. That unlocked new pilots with built-in skills and better components starting out which made things much better for subsequent playthroughs. The game was always challenging, but never felt unfair. Basically, you can hold your own if you take your time, pay attention to the tactical battlefield and plan out your lance’s turns as a group. However, if you get sloppy or make a mistake, the enemy will totally take advantage. 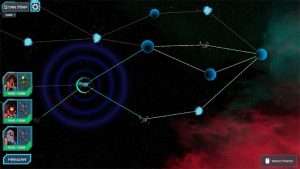 True to the rogue-like nature of many popular games these days, you are presented with a planetary map showing how you can travel through various sectors of space. There are normally two or three choices about which way you can go, with each stop along the path representing either a battle, an event or maybe a space station where you can repair your mechs and buy new gear. This is very similar to games like FTL or more recently Crying Suns. You don’t have a lot of choice but can at least pick whichever type of battle you prefer to fight as you move. You can’t go backwards on the path, and it always ends in a boss battle that you have to win in order to access the next sector and continue your run. 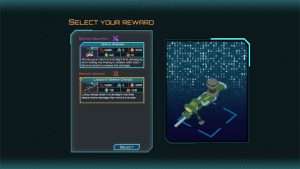 Graphically, Ignited Steel looks passible, though it’s not going to win any graphical awards. It reminds me a lot of Kaiju Wars in terms of its flavor. The graphics probably won’t hinder you in combat, but when the game tries to display fine details, like when you are picking out new weapons, they all look pretty much like colorful blocks that are hard to distinguish from one another. You will need to read the text to figure out what each item is for the most part. 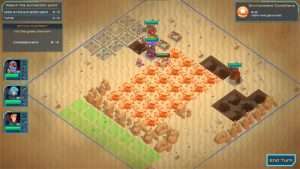 One of the elements that I enjoyed most in Ignited Steel was the ability to build out mechs and form mutually supporting lances. This got even better when I unlocked pilots and leveled them up with special skills that further complimented their mechs. For example, I ended up with one mech that was really fast and equipped it with a light gun that could fire a bunch of times each round without generating much heat. I normally held that one back a bit and zoomed it in to clean up enemies that were rocked with big area-effect attacks. Then I had one huge mech with a bomb type attack with enough hit points to reliably overheat for increased damage. And then one mech that was kind of a medium range fighter with the ability to knock back opponents, which was handy for bosses. 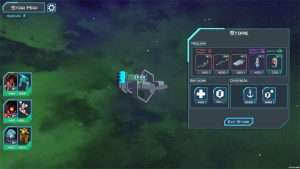 There is a surprising amount of depth in Ignited Steel: Mech Tactics. And I found that as I completed subsequent runs and unlocked more pilots, components and mech frames, that I enjoyed it even more. There is also a lot of replayability here too, which makes the sub-$15 price on Steam even better for gamers. You get a lot of mech bang for your buck with Ignited Steel.