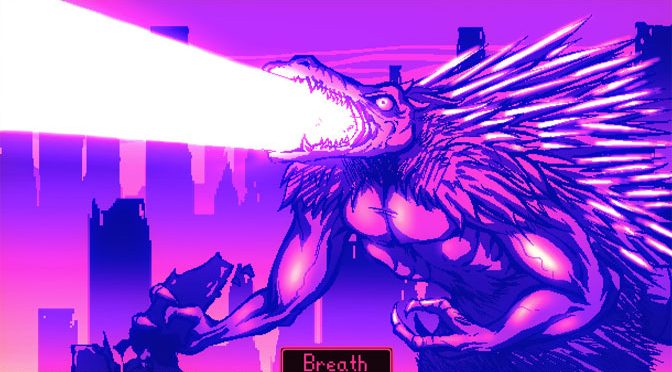 There’s a weird amount of overlap between the board games I love and the video games I end up playing. I dearly love Super Dungeon Explore, which basically replicates the experience of playing an old dungeon crawler on a 90s-era console.

Kaiju Wars has a similar feel, if it follows different mechanics. Where Kaiju Wars really shines is in its absolutely unrepentant and open-eyed embrace of the cheese. If you’re not a fan of the ridiculous, you might want to give Kaiju Wars a pass, but if you ever wanted to defend Tokyo from Godzilla, have I got the game for you. 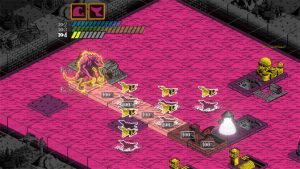 I’ve mentioned a number of games in the past in which I’ve noted that the plot is largely irrelevant. Nowhere is that more true than for Kaiju Wars. Let us all be completely honest here; no one goes into a kaiju movie for the plot. We’re there to see giant, laser-shooting reptiles battle it out with titanic moths and gigantic apes. Any entertaining fluff that comes after is an incidental bonus, and not only does Kaiju Wars understand that concept and embrace it, the game goes for it with a cheerful exuberance that takes me back to the most ridiculous action flicks of the 1980s.

In short, Kaiju Wars has a particular audience in mind, and the game is a love letter to that niche group.

That said, the game does offer a story that’s told in the form of text blocks that appear between stages. The characters are largely interchangeable, but you do have the option of putting your own stamp on them by selecting ridiculous titles and such. 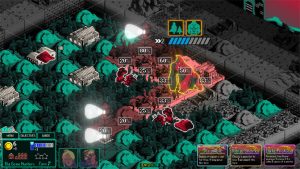 The game’s art style just serves to reinforce the ridiculousness. The graphics are perhaps a step above what you’d find in old-school arcade games, which honestly fits perfectly with the vibe the developers so carefully created. Each stage opens with the board assembling before you, and this is really where Kaiju Wars reminded me so strongly of Super Dungeon Explore. The board is static, by which I mean there’s no camera shifting or rotation of the game board that you can do. It’s just you, the squares, the monsters, and whatever resources you can cobble together.

Make no mistake, Kaiju Wars is first and foremost about doing battle with, well, kaiju. However, the game also incorporates the familiar resource management and unit generation mechanics that you’d expect to find. Yes, these have been solidly tweaked to accommodate the game’s setting. For example, at each stage, you’ll have a research scientist, Dr. Wagner, who runs a lab, and you’ll need to protect her as the research she does results in “breakthroughs” that satisfy various win conditions. You have the option to build additional labs, which isn’t a terrible idea considering how integral the research is to both surviving and satisfying win conditions, but in the even that the monster manages to reach her, you can have her evacuated. The downside to this is that she will obviously not be conducting research while she flees for her life. 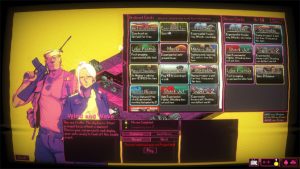 Aside from the scientist mechanic, everything else is more or less standard. You have ground units, artillery-esque units, and buildings you need to protect. The buildings are the key way you generate money which you can then invest in units that you can throw at the monster du jour. You earn money at the conclusion of each stage based on the number of buildings left standing. It therefore behooves you as the player to pay attention to the amount of destruction going on around the board. Most of the time, the monsters, mercifully, will attack units before buildings, giving you a slight edge in resource generation. However, you should anticipate that there will be significant carnage. 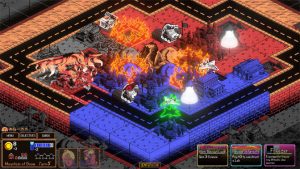 The monster designs are pretty spot on, and Foolish Mortals have taken advantage of the kaiju’s monstrous nature when designing their abilities. Some kaiju can tunnel; others will be able to take out units on more than just the adjacent square by swiping their massive tails. I have to admit that I particularly cared for the animation as each monster moved between squares during its turns. 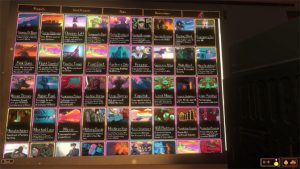 There are a few random effects such as weapon spawns that can drastically change the balance of power, and there is an automatic card-draw mechanic that sometimes allows you to choose between different effects. I could go farther into more granular detail, but by now, you both get the idea and know whether or not you’re interested in playing. 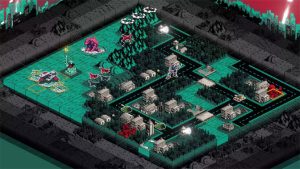 Kaiju Wars is a board game you’re playing on the computer that offers monster battles and resource management, if that’s your interest. The game tends to start off easier, and the difficulty increases as the monsters begin to become more varied as you go through later stages. While none of the controls are necessarily complicated, the strategies behind balancing resource generation and deployment with the need to destroy the monster can be. I don’t really think Kaiju Wars is therefore the sort of game that one can play for a bit and then come back to it without some skill loss.

However, investing your time in such a hilariously over-the-top game feels like you’re sitting down to participate in your favorite kaiju movie. If you’ve ever gleefully chomped popcorn while watching a giant monster crush city buildings below its feet, then yes, Kaiju Wars is for you. 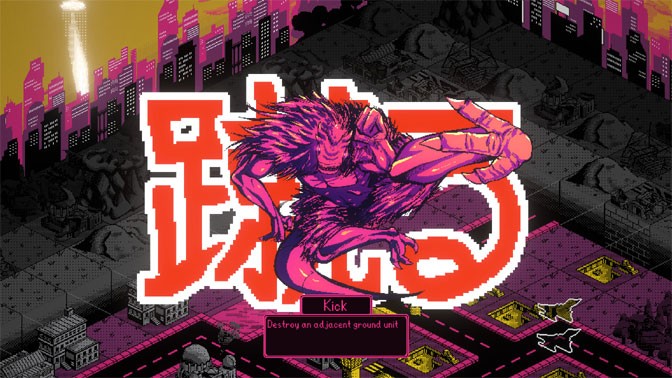