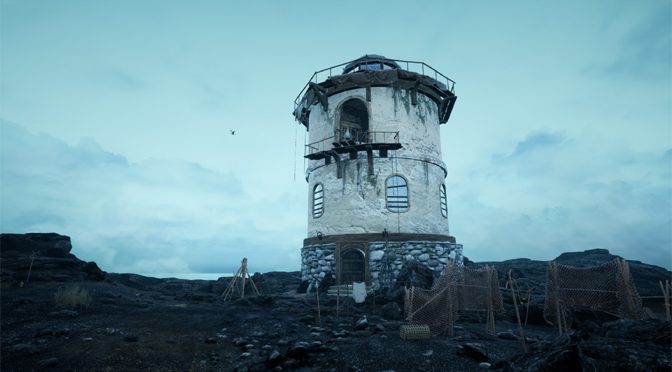 I love the works of H.P. Lovecraft and have pretty much read the complete compendium of his works, or at least of his major works. I also used to game master for a Call of Cthulhu RPG group for many years, so I am pretty familiar with the mythos, the elder gods, and the fact that man exists on an endless sea of blissful ignorance and was not meant to travel far. 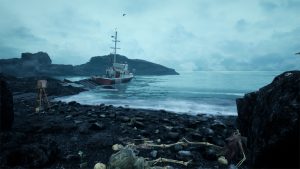 Over the years there have been a lot of video games based on the Lovecraft mythos. A few of them got pretty close to describing the brooding horror of the books, which is often told through a slow buildup of good storytelling rather than the literary equivalent of jump scares. Others didn’t really understand the mythos at all, and simply used those stories as a backdrop for some run and gun affair, because you just need a shotgun to battle an elder god, right? Others borrowed heavily on the core concepts, but created their own narratives and worlds, which can be fun too.

The Shore falls squarely into the first category, which means that it really tries to stick to the Lovecraft lore as much as possible, with a few notable exceptions. 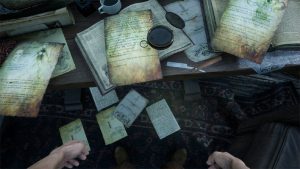 On the plus side, The Shore does a fantastic job of creating a deeply foreboding atmosphere where you are really afraid that something bad is about to happen. And while the game does have a few jump scares here and there, it’s really at its peak when it’s just presenting the world without any obvious threats, but a whole lot of subliminal terror.

At its core, The Shore is a walking simulation along the lines of Dear Esther, Everybody’s Gone to the Rapture or even Observer. 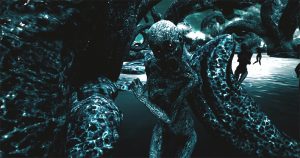 It would actually be fair to call The Shore an advanced walking simulator, because it does occasionally layer gameplay like chase scenes or even rudimentary shooter elements into the adventure. I actually think the game is at its weakest in those moments, but kudos to the developers for trying something new. And for gamers who simply need to have those action sequences in their games, these will check that box without being overly annoying for those of us who don’t really like that kind of thing in an exploration type game. 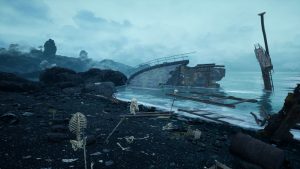 The plot of the game is that you are shipwrecked on a deserted island. But looking in almost any direction reveals evidence that you are far from the first person to be stranded here. The shoreline is littered with broken ships of all sizes, the occasional crashed airplane and even at one point a submarine if you look close enough. It’s a literal Bermuda triangle of wrecked vessels. 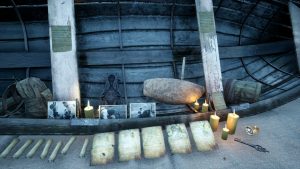 Moving inland a little bit (like most walking simulations, there are limited directions that you can travel) you will quickly find more evidence of the island’s previous visitors and victims. In some cases, their skeletons are littering the beaches. In others, they left letters asking for help inside bottles and cast them out into the ocean, only to have then float back after a few days. It seems like nothing is able leave this strange place, but that means there are lots of notes left by others to find. Some of those letters are disturbing just in themselves, and you can collect them along with other artifacts for further study later on as they get stored in a kind of open-air museum inside a beached rowboat. 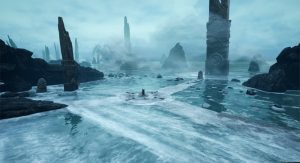 The central part of the island has a broken down lighthouse which kind of acts as your base of operations in the early part of the game. Eventually you will learn how to open up gates blocking your progress to other parts of the island. The gates are just one kind of puzzle that you will need to solve to progress the story. None of the puzzles were particularly difficult, although a few stumped me for a bit until I figured out their internal logic. 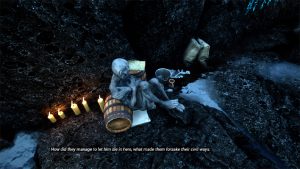 Like a good Lovecraft story, the horror steadily progresses in The Shore until you can no longer even try to explain away the strangeness of the island by natural causes. In fact, you will eventually begin to encounter the kind of creatures that would instantly make your characters in the pen and paper role-playing game go instantly insane. Somehow this island is home to several elder gods, and you actually get to interact with them. For a diehard Lovecraft purist, that is way over the top, but I can’t say those encounters are not done well here, even if that part of my brain that studies the mythos is screaming at me that such an event would be completely impossible. 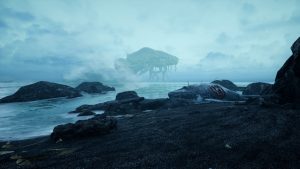 The overall plot of the game is that you are looking for your missing daughter, or more accurately, trying to bring her back from the dead. Your main character muses about this using some really great voicework, which helps to move the story along. There are even some surprising plot twists that I didn’t see coming (and I normally do) so it was great that developer Ares Dragonis was able to surprise me. 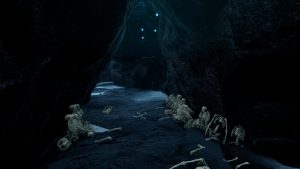 You can get through The Shore in about three hours or so if you take your time and enjoy the ride. Given that the game is currently $12 on the Steam platform. That’s a pretty good deal given the quality of the game. You are really getting quality over quantity with this one, and there are some surprising moments that you won’t want to miss, especially if you are a horror gamer and especially if you are fellow Lovecraft fan. I’m really glad I stumbled onto The Shore’s lonely island, and can’t wait to see what this developer will come up with next.

The Shore earns a respectable 3.5 GiN Gems. It’s a weird island that is worth a visit.

One thought on “Creepy Cthulhu Haunts The Shore Adventure”