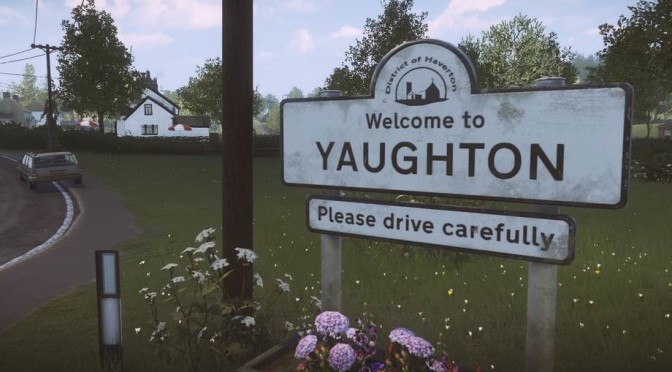 Everybody's Gone to the Rapture

Everybody’s Gone to the Rapture is one of the most beautiful ‘walking’ games to grace our screens. The latest game from The Chinese Room, of Dear Esther fame, Everybody’s Gone to the Rapture is also the most English feeling game I’ve ever played. This is an example of a very English apocalypse – no fuss, no nonsense, just go quietly and don’t forget to hang the washing on the line.

As a ‘walking simulator,’ Everybody’s Gone to the Rapture is the type of game that divides gamers, between those who are open to new experiences and those who think you need guns and scores to consider something a game. Rapture has no guns, no zombie attacks and no levels, but it does have an intriguing story and some of the best writing games had to offer, in 2015.

Set in the fictional, Shropshire village of Yaughton, Rapture begins after the end has already happened. The village is deserted. Cars have been abandoned, a child’s bike lies on its side, halfway down the lane. The washing wafts on the line and the only sound is the harsh crackle of a radio broadcast, counting down random numbers.

The feeling of Rapture, is eerie. Something has happened in the picture postcard village and as the player, it’s your job to find out what. The only clues are balls of light that zoom around the village. By following them, you can trigger key flashback sequences.  However, many of the scenes are optional and only triggered by exploring the village and happening upon them. This is your incentive to walk, but the slow pace means many might miss out on at least some of them.

As these scenes play out, the characters are represented as figures of light, so we never see any faces.  Each flashback reveals a snippet of the story, in the last hours before they all disappeared.

Rapture relies a great deal on its writing, so it’s a good job that the script and the acting is superb. I’d go as far as to say, this is the best in-game acting I’ve encountered. It was like listening to a BBC Radio drama, which offers some indication of its quality.

The story of the characters plays out like a soap opera, with affairs and family rifts unveiled through the snippets of dialogue. As the impending disaster becomes apparent, parents leave phone messages for their children and the local vicar calls people to the village hall.

It’s worth mentioning that Rapture is set in the 1980s, so the internet and smartphones don’t exist to help the village find out what’s going on. Instead, they are at the mercy of government information and decisions to cordon off the village roads and stop the trains. They are trapped under the illusion that there’s a breakout of flu, except people keep dying and disappearing.

It’s all in the Detail

Various buildings are open, leaving you free to walk around them. Some are not.  Usually, a ball of light grants access to a building. Using the tilt function on the controller, you find the sweet spot on the light and then a flashback is unleashed and plays out.

Once inside a building, you’re treated to a glorious amount of detail. Each cottage is decorated in the tastes of its former owner.  In addition, period details, such as the 80s cars and phones, as well as an abandoned rubix cube or the 80 pence for a pint of beer, in the local pub, are well observed. And I loved the attention to every tiny thing, such as the street signs and even the utilities markers for gas and water mains or even the design of train station fences and a pothole patched with tarmac, making this fictional village feel so real.

Alongside the story of the villagers and their quibbles, we get the narrative of two scientists – the only ones who know or suspect what’s really happening. This is revealed via radio recordings and telephone messages, but it’s much less compelling than the village drama. It’s also let down by the less than satisfactory ending, but Rapture is a game that’s about the journey, rather than a bombastic ending and final boss.

Tying the whole game together is the most fantastic score. At times it has echoes of Elgar’s pastoral splendour and then we’re treated to an incredible male choral piece, as the sky darkens. The music really draws out the emotion of the story, to great effect and all praise goes to Jessica Curry (former) founder member of The Chinese Room and composer of this amazing score.

The pace of Rapture could be its undoing for many gamers. At times, even I got frustrated because the walking speed is so slow. Although, I think this has been speeded up, since release and towards the end of the game, I did discover that holding R2 will let you walk slightly faster.

If you try to rush through Everybody’s Gone to the Rapture you will a) become frustrated and b) miss most of the story. If you’d like to experience a lazy, summer day wandering through an English village and the surrounding countryside, with the added bonus of nosing around their cottages, then Rapture is for you. Those who do stroll around Yaughton will be rewarded with the brilliantly told story of a quiet, country apocalypse, which is probably closer to the truth than most games get.