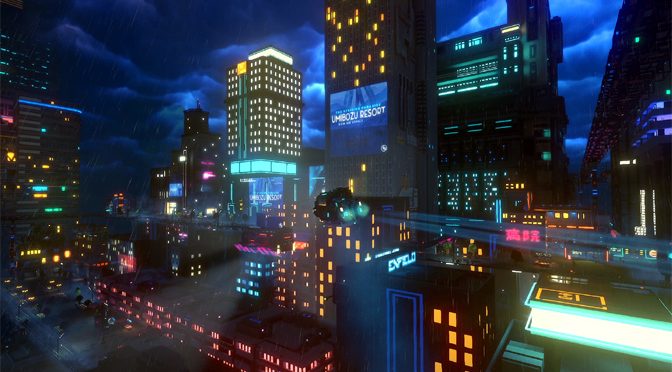 If you want contemplative quirky characters rather than button mashing combat, hover cars rather than heroes on horses and sci-fi neon noir rather than the typical science fantasy get this game. Like the best indie games, it is low priced, easily consumed and focused on delivering a few great ingredients rather than cooking a seven-course meal.

See our full review of Cloudpunk on Steam, which was released earlier this year. It’s now moved to consoles, and this review follows that version. 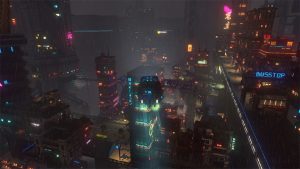 Cloudpunk puts you in the driver seat of a delivery service that skims the floating skyscraper city Nivalus at night. You get money by picking up packages for customers that range from suspiciously anonymous to the tragically trapped in this corporate controlled future. The newly immigrated character you play, Rania, mainly interacts with her cyber-dog AI companion Camus and her mysterious dispatcher Control. All are well written and well-acted. Voice Actors Andrea Petrille (Rania), Cory Herndon (Camus) and Mike Berlak (Control) deliver their lines with subtle emotion and not the usual over the top vocals of most games. They and the rest of the cast immerse you into this Uber, Lyft, DoorDash future.

Maneuvering your cloud car, called a HOVA, can be relaxing when you have a straight path but frustrating when you smack up against a building by taking a turn too fast. You can purchase upgrades to your HOVA like “Plasteel Bumpers” which cut down on the need for repairs and “Vertical Boosters” increase your mobility. Both were worth it for me in making the game more enjoyable. 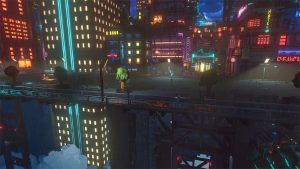 Not that you can’t ignore such things. If you run out of fuel Cloudpunk lets you limp along till you find a gas station and if you are in desperate need of repairs your HOVA lets off a stream of smoke in your wake until you get to a repair shop. It fits with the low-key, slow reveal of the story and doesn’t induce the typical combat death anxiety of your regular video game. You can personalize your HOVA also, with a Retro Antennae and different taillights that leave a short signature of color in your wake.

Serenading this journey is UK composer Harry Critchley’s atmospheric ninety-five-minute soundtrack. It is beautiful and can be purchased separately. Just like the game it reminds the listener of Blade Runner, Miami Vice, Electronica and 80’s synth music. It gives weight to the dialogue between Rania and different social status (and stratus!) of her desperate clients.

This dialogue and much of the story were written by Thomas Welsh, a UK author known for the Metiks Fade fantasy trilogy. He came to this project after seeing an early demo for the game by Berlin-based developer Marko Dieckmann. He emailed him and asked if they needed a writer for the game. After exchanging writing samples, he got the job. 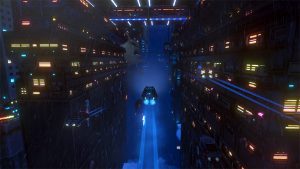 The game’s NPC’s give nods to groundbreaking writers of science fiction and their themes. One NPC is called Octavius Butler. An obvious homage to the writer Octavia Butler. Another is the addled android Huxley, “Nivalis’ best, cheapest private investigator” who speaks like the narration of noir novel.

Marko Dieckmann, the Berlin based creator of Cloudpunk worked on the graphics of this project for three years, basing it on Voxel art, pixels pushed into 3D cubes. Some famous voxel games are Minecraft, Crossy Road and Shooty Skies. This gives the game a blocky view of its people up close and a retro artiness at a distance. It melds with the synth music, the moody dreaminess of Cloudpunk’s tone and delivers lots of real estate for your hovercar to cover. 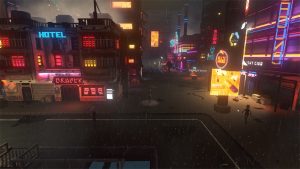 On the surface this is a single-person fetch quest game, good for a diverting experience. But going below that surface the androids, humans and cyborgs of this darkly beautiful cloud dwelling come across as complex and many times touching. The main character, newly arrived and trying to survive her first night, interacts with them as a fellow traveler rather than a conqueror or sword swinging hero. She doesn’t shoot anyone, but she can still help save some of the people she meets, within the scant resources at her disposal.

The success of this game looks like it will lead to either some DLC or to a sequel. Both of which I welcome. So get this offering from Ion Lands if you want a unique experience in graphics, character, story and sound.