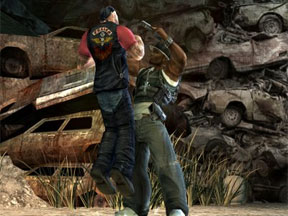 50 Cent: Bulletproof makes its newest debut onto the PSP handheld system, with a slightly varied version of the game entitled the G-Unit Edition. Despite a slew of mixed reviews on the PS2 platform the game still sold fairly well overall and so it’s no real surprise seeing the game make its presence known on the handheld home front.

The storyline is still in tact if you’re familiar with the PS2 version of the game. You play as the top rap artist himself, "50 Cent" New York’s hardest street hustler, hell-bent on revenge after a near death experience with the wrong people. Upon receiving an urgent page from an old cell mate, K-Dog, 50 rushes over to bail his boy out of a real bad jam.

One thing about the hood though, is that if you go looking for trouble it’s usually trouble that finds you first. 50 ends up walking right up into the middle of an ambush and gets shot nine times from behind and left for dead. Now, personally, I don’t know how in the world a man would be able to get up from an execution style shooting like the one depicted in this cut scene, but one things for sure any man able to bounce back from heat like that MUST BE bulletproof, hence the name of the game suddenly makes perfect sense to me. Now back on his feet and seeking revenge, 50’s prepared to ride or die as he will go to any lengths to find out who was behind his hit and settle the score once and for all.

Bulletproof is a fairly solid looking for a PSP title, especially during the cinematic scenes. 50 Cent and all his boys show up in their "bling" just like they did in the PS2 version. As you progress through the game you can purchase new "G-Unit" attire to keep 50 looking fresh so he can take the streets back in style. Outside of player models the background scenery doesn’t offer a whole lot of eye candy, but in the same breath the hood ain’t ever been too pretty a place to brag about anyhow.

The game is loaded with tons of audio features, packing over 160+ music tracks, 16 music videos, and customizable play lists to edit game play audio with or just listen to music on the fly. If you’re a big R&B fan there’s more musical content here than you can shake a stick at. Besides musical content there are also some pretty good sound effects and voice-overs from 50 and other popular artists from around the music world that help to round out a very solid audio engine.

The game offers up a quick tutorial before you find yourself neck deep in the crime world of New York City. Here you learn basic survival moves and more to help better your chances out in the streets. 50 can perform one of three basic moves on his enemies be it punching, shooting, or throwing them around. You can vary these simple attacks into effective combos to inflict serious pain on those who choose to stand in your way.

Later on in the tutorial you learn more lethal counter kill moves. 50 can perform 1 of these 36 various instant death moves by tactfully stripping his enemy of their own weapon and taking them out with it…for good. These gory, but awesome counter kill moves kick off gritty real-time cinematic cut-scenes depicting 50 either snapping necks, shooting foes in the head execution style, caving faces in with a foot-stomp-from-hell, or slicing them wide open with jack knives, just to name a few, along with a slew of other vicious ways to die at the hands of a mad rapper. Outside of offense 50 can perform roll moves to momentarily evade enemy attacks and bide himself a little extra time to do his thing.

When his health gets low 50 can pop a few pain-killers to bring it back up and keep him in the game longer. He can also collect items such as cash and ammo by literally kicking the stuffing out of the trail of bodies he leaves behind. You can never have enough ammo around in the hood and cash can be used to purchase new attire, bonus music videos and tracks, as well as exclusive video footage from 50 and his crew.

Alright so we’ve got the basics down, it’s time to settle the score. This time around though, it’d be wise to employ the help of a few friends around the neighborhood. "Moet and Chandon" are a couple hookers who have a lot of love for 50 since he saved them from a pimp a while back. Amongst other benefits they’re a great source of information when you want to get in the know. "Booker" is an old wise bum who has spent quite a bit of time out on the streets and knows a lot of things happening around the hood. You’ll definitely want to talk to him often.

Grizz is an old war vet, who runs an armory out of his van. Go see him if you need ammo and armor before you leave the hood. Another helpful friend, Detective McVicar, whose actually voiced-over by star rapper Eminem himself, is a shady cop who has a lot of valuable information to offer"for a price.

Finally, 50 can count on his good friends and homies, Lloyd Banks, Young Buck, and Tony Yayo of his "G-Unit" gang to provide valuable info and other favors. 50 does has a few other acquaintances out there he can rely on as well for extra bonuses like music video footage, sound tracks and if the money is right, a few game cheats.

The bad news about Bulletproof is that despite the fact it has quite a few things going for it, it only remains bulletproof until you’ve spent just a little time out in the streets with it’s game play engine which goes on the prove itself full of holes. The PSP version of the game uses a top-down camera angle as opposed to the third-person view of the PS2 version. Usually, this common camera angle works fairly well on handheld platforms but in this case it becomes the prelude to a fatal chain-reaction of game play flaws and shortcomings.

For starters, the overhead angle seems way steep and so navigation feels a little awkward. On top of that, it makes it a little difficult to anticipate enemy encounters. Often times, players will literally run right into an enemy ambush because the limited camera angle actually covers only a small radius of the field. It’s really easy to get blasted, especially when all the enemies are all holding fire weapons. There are moments where the camera angle is so bad it’s literally like walking up to your own private execution.

Another annoying game play quirk related to the camera angle is the fact that it is extremely difficult to visually see doorways and through ways. There is a fair amount of the ole’ traditional corridor exploration going on in this game and where there are corridors there are plenty of doors and passages to investigate. The problem is the angle is almost directly above 50’s head and like wise above the corridor passages making it painfully hard to even make out actual door ways and through ways. Were it not for the "navigational HUD," which is only remotely helpful, it’d be very easy to walk right pass a closed door or open passage way.

Helping to add more fuel to the fire, the combat aspect of the game, though it has its shining moments, is not without its flaws either. While the counter kil" ability is a very cool tactic it does have its shortcomings. The most notable is the fact that once 50 takes the weapon of his enemies and uses it against them, it becomes his currently equipped weapon. Now while that all sounds good, the problem comes into play when you have your "nine" equipped to dispatch a sizable group of enemies and you decide to counter kill the guy closest to you holding the Billy-Club. Once you finish him off now you find yourself in a disadvantageous situation: you, your little Billy Club, and 3 other guys holding a combination of firearms and/or stronger melee weapons.

What’s more surprising, is how easy it is to defeat the stage bosses. Even with bad camera angles, if you have the shotgun or some other automatic weapon equipped and a few extra painkillers to keep your health up you’ve pretty much insured yourself a guaranteed victory. These fragile bodied bosses are not much harder to take out than all the thugs that protect them and that’s just not cool. With such weak opposition standing between you and completing the game, what was once a sizable 16 levels of game play becomes suddenly a drop in the bucket as the game can be completed in just a few hours.

The bottom line? The real shame here is that these annoying game play bugs and horrible camera angles which probably could have been resolved before release with a little more careful thought and tweaking help to keep this game from being a pretty decent PSP title. Instead, what’s left is a slightly over-hyped commercial product with the 50 Cent brand on the jewel case that is arguably worth the new release price gamers are going to pay in stores.

I’d feel guilty if I didn’t say, "If you’re a big "50 fan" and are seriously thinking about buying this game at least look for a pre-owned copy first. There should be plenty there. 50 Cent: Bulletproof G-Unit Edition isn’t a total disappointment but it’s definitely far from platinum as it only rakes in a weak 3 GiN gems.