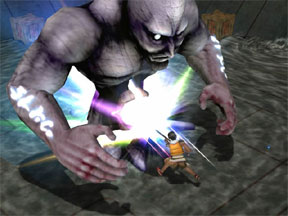 Arc the Lad: End of Darkness

If I never have to hit my X button again, I will be a happy man. Between scrolling through dialogue and hack ‘n’ slashing my way through this game, my X button will need a long vacation.

You begin your journey through this session of Arc the Lad as Edda, a young boy with a rather standard anime look. Combine his nanve persona and nondescript look (you’ll love the shoulder pad things he has on) with the bland narrative and you’ve got yourself an insanely dull beginning to the game.

Thankfully, you can rename your character when you start out. I must admit, "Edda" is probably one of the most annoying names ever"but I digress.

Edda has the gift of exorcism and will fulfill his destiny of saving the world by ridding the world of Darmysts, also known as malademons – the bad guys. You, as Edda, become a hunter and"wait for it"hunt the bad guys. The story behind the game is full of RPG clichTs and unless you’ve been following the Arc the Lad series, you won’t be terribly impressed.

Without many voiceovers and cut scenes, getting along in the story is rather dull as you end up reading the dialogue on screen and feverishly pressing X to continue on.

If hack ‘n’ slash is your thing then you might enjoy running through the levels and repeatedly pressing X to take down your enemies. Sure, you can strafe and charge/back up but you’ll spend a majority of your time hitting the X button a few times to put combo hits on your enemy. Some require an exorcism that will require you to hit the O button after you hit X enough to stun. In my humble opinion, the gameplay is pretty boring and hack ‘n’ slash gets repetitive.

On a brighter (yet still dim) note, the game is not linear. Instead, you do various missions which still can get repetitive. Pick up a quest here, go there to do the quest, return here. With the quests, you gain experience and further yourself as a hunter. Also available are cards that let you utilize different abilities and spells. Don’t let the cards fool you; they are just a fancy way to equip your character with the spells and abilities. Nothing new to see here, move along people.

Speaking of nothing to see, the graphics overall are sub-par. As you wander around the various towns and villages of the game, you will fine some uninspiring environment coupled with a sparse population. The baddies in the game also leave a little to be desired as there are only so many versions of them. The combo attacks you throw are pretty smooth but that doesn’t make up for the other visual maladies.

The music is surprisingly pleasant and fits the game well. The sound effects are average and the random voiceovers are pretty horrible. After a few battles, you’ll want to lower the volume. I don’t believe you can turn those voiceovers off either.

What appears to be the best feature of the game, online multiplayer cooperative play, was unplayable by yours truly (blasted connection is non-existent). Sorry that I can’t elaborate more on the multiplayer features but I would certainly give them a try if you can find some people to pair up with. I vow to get my connection functional so I can try this feature!

ClichT storyline and sub par graphics overwhelm this edition of Arc the Lad. If you feel like taking the time to build up your character and pursue the online portion of the game, by all means, go for it. Just remember, don’t blame it on me if that is lacking too!

There are definitely better RPG games out there and perhaps Arc the Lad is better off as a RTS than a hack ‘n’ slasher.