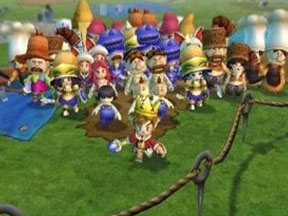 I borrowed my eight year old niece’s Wii to review this game, and she was more than happy to help me play it, which in part explains the delay.

The game opens like a children’s storybook illustration with very nicely done pastel shots of a very lonely little boy, Corobo. The voice over work for the opening is from Corobo’s point of view and is a child speaking English telling his story. Sounds very sweet and cute, now only if the developers would have used the child more because pretty much all the other audio dialogue is what I can only explain as gibberish noise.

Corobo is a very lonely little boy in his bedroom who is interrupted by rats. He then follows the rats into the woods and finds a crown. Placing the crown upon his head, he soon finds himself the king of a mysterious world.

His kingdom for now only consists of one town, Alpoko, but soon he is told to grow his kingdom.

Little King’s Story is a mix of RPG and sim based strategy which does not use the motion controller feature that the Wii is so known for. With the Wii remote and Nunchuk you will guide little Corobo through his kingdom on a variety of missions or tasks.

You will build the town too, but not alone. The carefree adults who live there can be trained as a hardworking farmers, grunt soldiers and, animal hunters by kicking them into the corresponding buildings.

You will then go out to dig for treasure, battle beasts, generate income, and actually build the town. The village is upgradable and the population will grow with each new territory claimed. Keeping the villagers happy is not hard; just keep them busy and safe.

The storyline you will read during the game is actually well written and humorous to children and adults. The gameplay is similar to Pikmin in how you handle your character and the "supporting" trained citizens. It’s "follow the leader" and then order, or throw, them into the task at hand.

The way Corobo appears to punt them into the direction he his pointing downright cracked my niece up!

She also enjoyed just tossing them about or slamming them into the walls. I had to explain to her that they did not like that too much and her citizens wouldn’t like her as king.

I found that this game is a great RPG for kids who are new to the genre. It was nice to sit back and play a game without having to over-think strategy. A game that makes you laugh is always a bonus too.

One that entertains the niece while you babysit is great, much better than the endless hours of bad cartoons!

In a way, Little King’s Story could also be seen as a bit of a gateway game, showing kids what thrills that games will offer when they get older, while entertaining them at the same time. And good games for little kids are rather rare, so consider The Little King for your favorite rug rats.