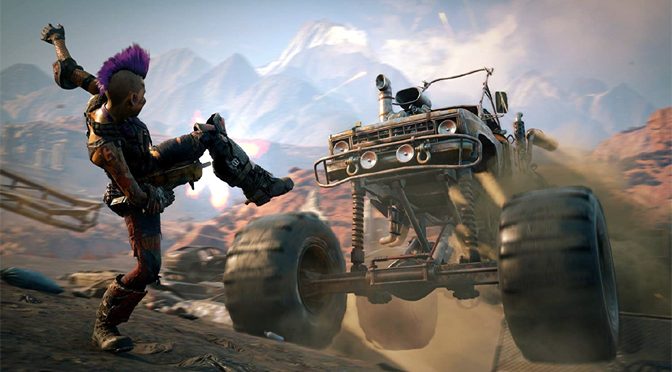 I will admit, when I played the first Rage on Xbox 360, I really wanted to like it. After all, I loved id Software’s other releases of DOOM, Wolfenstein and Quake. Also as this was the first time we saw id Tech 5 in action, I was curious to see how well the game would run. But sadly despite running on two somewhat open hubs the gameplay was rather bland, as were the settings with everything being a post-apocalyptic (or in this case, post asteroid) brown.

To make matters worse, id Tech 5 put a huge burden on the hardware. Granted the game was able to run 60 frames per second on Xbox 360, it suffered from severe texture pop in, made even worse with the fact that for the game to run its best, you had to install it onto the hard drive, an up to 20 GB install. With the small size of Xbox 360 hard drives at the time (maxing out at 500 GB,) the game ended up being nothing more than a tech demo to me to see the latest id engine. 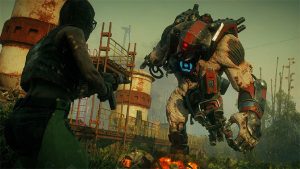 That’s why when I first heard that Rage 2 was announced for the current gen consoles, I was curious again. I first thought that maybe after successful runs with both Wolfenstein II and DOOM 2016, we can see the Rage we always wanted that would take advantage of id Tech 6, and with larger hard drives available on Xbox One, PS4, and PC, the install issue would be a thing of the past. Well, I was half right about the install size, but not the technology. 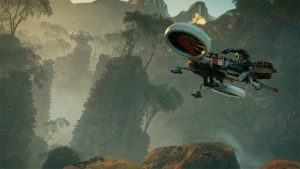 For Rage 2, id and Bethesda subcontracted Avalanche Studios, based on their experience with open world settings previously seen in both the Just Cause series and the underrated 2015 Mad Max video game. With their arrival, comes their Apex engine. Though I would love to see what the game would have looked under an id Tech engine, using Apex seems more like an appropriate choice for a game that combines shooting and racing exploration. 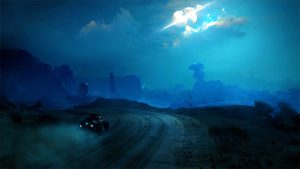 Taking place 30 years after the original rage, and 136 years after the Apophis impact, Earth is still a violent wasteland, although some environments were able to evolve into swamplands. Players assume the role of Walker, one of the last surviving Rangers after his home settlement is destroyed by the Authority, the main antagonist of the previous game. Their leader, General Marshall Cross, declares a war to acquire whatever Ark technology is left on Earth in order to control all, and it is Walker’s job to find them and stop Cross for good. 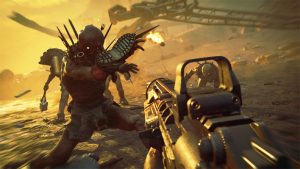 The heart of the game centers on Project Dagger, an assault on the Authority’s base. Along Walker’s travels’ three key figures will help out with their project skills. The first is John Marshall, underground resistance fighter, followed by Loosum Hagar, mayor of Wellspring and daughter of Dan Hagar, and finally there is the mysterious and reclusive Dr. Kvasir, former Authority scientist who will provide vital information on Authority technology. 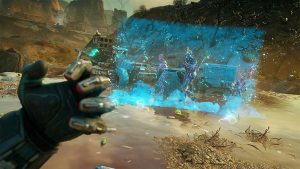 Over the course of the game, each ally will provide missions to level up their skills to finish Dagger. Marshall’s missions include taking out bandit dens and Authority hideouts, while Hagar’s missions consist of destroying Authority sentry towers and convoys, as well as fuel depots. Lastly Kvasir’s missions center on locating Arks and fallen Rangers. When each ally reaches level 5, then additional missions will open up to unlock more about Project Dagger.

[amazon asin=B07DN58K69&text=Do some amazing raging on your own with a copy of Rage 2 from Amazon!]

In addition to the main missions, there are also races that can be won with your main vehicle, the Phoenix (voiced by Wonder Woman herself, Lynda Carter) as well as other cars that are acquired from the Wasteland. In addition, Mutant Bash TV returns! This is an arena based combat show where winning not only means survival, but can also earn you tokens for special prizes. 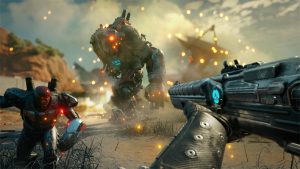 Needless to say there is a lot to do, and a lot to explore. Exploration felt a lot like Assassin’s Creed Odyssey with the way locations are marked with a question mark that is exposed only when at a close distance. Combat is also quite fun. Sure there is the standard gunplay with pistols, assault rifles and shotguns, but special weapons include a fire-bullet-shooting revolver where the rounds explode at the snap of your fingers, Thanos style. There is also a rail gun style hyper cannon and a gravity dart gun. A rocket launcher is also available with an additional lock-on feature that shoots micro missiles at your target These weapons can be powered up to do more damage or add more features to them similar to DOOM 2016. 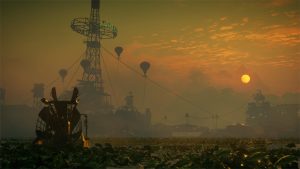 Even further, your Ranger armor can also be powered up. Special attacks such as the Push, allowing you to force enemies a long distance, Fus Ro Dah style, as well as the Slam (a jumping smash to the ground) and Vortex (a gravity ball the sends enemies airborne.) Combining these features with your guns adds a little variety to the gameplay.

But there is a catch. Weapons and powers are only obtainable by finding their respective Arks. While it does evolve them slowly, I still was not able to find the Gravity Dart gun in my playthrough. Same for the Barrier power up, which puts a force field in front of Walker on demand. 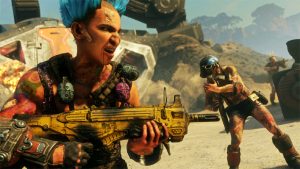 Visually the game looks good. Gone are the drab brown locales of the first game and now we have a lot more hot pink and blue. The Apex engine does a good job most of the time at maintaining 60 frames per second, though I have noticed some significant frame drops while driving the Phoenix, as well as some shadow and texture pop in. Even worse, the game maxes out at only 1080p on Xbox One X. I do hope a patch comes out soon that will offer dynamic resolution because the X really needs it. 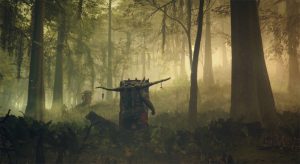 Sounds are also quite good. As mentioned before, Lynda Carter voices the AI of your vehicle, the Phoenix and the rest of the voice acting is quite good. Music is the standard id shooter fare, nothing really to write home about, but it gets the job done.

I finished Rage 2 in about 22 hours, which is a good length for a game like this, and id, Avalanche, and Bethesda have a huge road map of releases, including two full DLC releases, heading late into the fall. I will be keeping an eye on the future of Rage 2 but as it is, it’s worth a look into a decent shooter/racer. 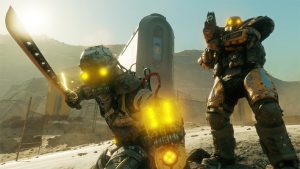 Pros: Massive open world environment, processed quite smoothly without load times (aside from fast travel.) Weapons and Ranger Powers all have a unique touch to the traditional shooter. Massive number of side locations to explore and items to obtain. Runs at 60fps most of the time. Very colorful environments compared to Rage 1. Fans of Mad Max will love this game!

Cons: Graphics max out at only 1080p on enhanced consoles. Some notorious pop up when driving the Phoenix, as well as some slowdown issues. Weapons can only be found in Arks and cannot be procured during battle. While Avalanche’s Apex engine is great for an open world setting, I still have to wonder how this would look using id Tech 6.

Ethical Disclaimer: This review of Rage 2 is based on the Xbox One Deluxe Edition provided to GiN by Bethesda. No outside influence from Bethesda, id Software, nor Avalanche Studios who provided and the review is the complete opinion of the writer. Game played to completion of the main story line, total gameplay time of 22 hours.