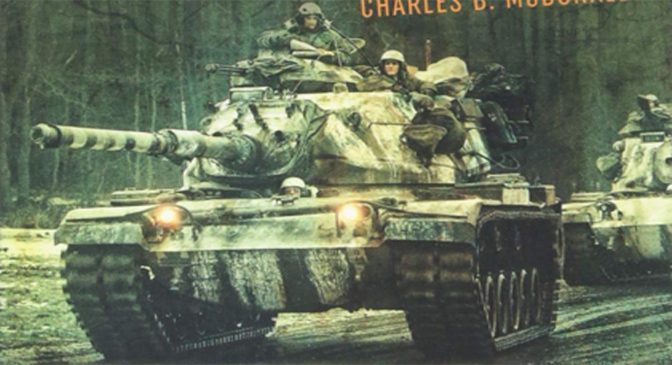 Hey all I’m back with a novel that takes a much older nonfiction novels what if scenario and turns it into a fictional story. If that sounds confusing, you aren’t alone. It’s Team Yankee, A Novel of World War III by Harold Coyle!

Plot: So let me get this out of the way first, the premise of the story is that in August 1985 during a standoff between NATO and Warsaw Pact member states, a scenario unfolds that starts World War III. This is a novel of what would have happened from the eyes of a platoon commander stationed in Central Germany and how it all could have gone down. It’s a decent story to listen to, and honestly if you are at all a military nut you’ll love the hell out of it. For those of us who aren’t such big military nuts it could be confusing. 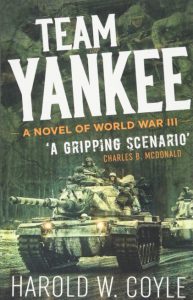 The story also switches occasionally to the wife of that commander and what she has to deal with while being evacuated from Central Germany with the rest of the family members who are left at their base. It’s an interesting story, but if you read the original World War Three; August 1985 by Sir John Hackett back in the 80’s you’ll know how this story ends. I didn’t have such foreknowledge however and so was pleasantly surprised at how the story went.

Characters: Sean Bannon is our main lead character, with our secondary lead being his wife Pat. They aren’t the most exciting characters at first but they do grow on you as the story unfolds. The rest of the cast is interesting, though the star is clearly Commander Bannon.

[amazon asin=1612006493&text=Enlist with Team Yankee with a copy of this high military fiction novel from Amazon!]

Voicework: This is narrated by one of my favorite narrators in the industry, James Patrick Cronin who has voiced the Demon Accords series by John Conroe, so if you’ve listened to any of those books you’ll know the quality of work that Mr. Cronin does.

Overall: For speculative Military Fiction this is a fairly good read, but people who aren’t fans may not enjoy the book as much as those who are.

For those who like: Military Fiction, Speculative/Alternate History, Decent Plot and Cast of Characters, Excellent Narration.