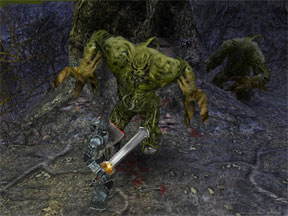 I remember when the first Dungeon Siege came out, I was impressed with the graphics and the gameplay. When the game started out and you were just a farmer in your little idyllic paradise tying to mind your own business, the game was interesting as you got a small inkling of things to come. You are then attacked by monsters and have to defend yourself with a rake or shovel. It was the perfect start of an epic story.

Later on the original began to degrade into more of the same old stuff. It was just one mindless level after another, with no real plot or characterization to keep you interested. I liked the gameplay, but had no real empathy with my character or any of the NPCs that joined you. So I never really finished the game.

So, what did I want in a sequel? Well, I would have liked it to have the same basic gameplay, but also be pumped up with a real plot and good voice acting that made me feel empathy toward my main character and all the NPCs that joined me. Wow. This is exactly what I got.

Anyone who played the original Dungeon Siege or any of the expansion packs will feel at home with the Dungeon Siege II interface. It’s pretty much identical with perhaps a few minor tweaks.

For those of you that don’t know, the game is played in a top down interface style. You can rotate the camera in any direction and zoom in and out as well. You left click to move around the level and right click to attack something. You can also set the game to have your character automatically respond when attacked, which is very helpful, or also have them keep attacking once the command is given instead of having to keep clicking each time you want to swing.

The graphics for the game are pretty good, but there are games out there with much better graphics these days. The game looks good, don’t get me wrong, but if they are planning on doing a Dungeon Siege 3, they need to think about totally refreshing the graphics engine. They are about at the limit in terms of acceptability in graphics quality.

They smarty added some nice spell effects that really help to put a shot in the arm of the graphics.

The coolest new addition to DS2 is a plot that actually follows you through the game. You have this overarching story presented in a unique way. You still get to create whatever character type you wish, but are put into the game as a warrior on the wrong side of the fence. Even though you start out evil, you soon learn the error of your ways and switch sides, which is a neat plot twist.

Also, all the NPCs that adventure with you, and most of the NPCs you meet, are voiced by some pretty good actors. You actually start to feel for your characters, and just having them in your party can open you up for new quests that you otherwise would not be able to peruse.

And pets have also returned. And although the perennial favorite pack mule is back, he has brought along a lot of friends including elementals, scorpions, wolves and others. Each pet can be fed various items like potions or weapons and in doing so, you increase their power in different ways. This is a pretty neat concept and lets them grow in level, but in a way different from the rest of your group.

Weapons are varied and you can tell the good ones from the cheap ones by the color of their title, so you don’t have to pick up any junk if you don’t want. Some weapons and armor are customizable by adding gems and other items you find along the way.

In general, I am pretty satisfied with the game. However, there are some design elements that I consider questionable, and a few things wrong with party AI.

In terms of design problems, you will often find quests that can’t be done when you get them. You will be following the extremely linear maps and come across a guy who is like "go in this cave here and help me out." However inside the game you will find monster that are 10 or 20 levels higher than your group. There is no way you can survive in there. You basically just have to leave the area and try to remember where it is, so you can go back and find it again sometime later.

Also, the game actually sends you backwards to maps you have already completed. You will find things like ghosts you can’t talk to, or a bridge you can’t cross without a certain character, or some odd caves that don’t seem to do anything at all even though they are obviously special. Then much later you will find a quest where you have to go back to find them again. This is kind of an odd way to extend the hours of gameplay if you ask me. I don’t like backtracking. And I like being presented with an impossible mission that requires me to come back later even less.

But that is basically a design question that the developers decided to put into the game. I don’t agree with it, but some folks will like it.

What is unforgivable is the party AI. It does not happen too often, but you will be running around and suddenly realize that one of your characters are no longer with you. They got stuck behind a tree or something and never followed you. What is worse is that when you realize this you are often in combat, and could really use the extra help. Summoned creatures will pop back into range if you lose them, but NPCs don’t.

Secondly, terrain seems to really confuse your ranged weapon fighters. If your melee characters are fighting on top a hill, sometimes your ranged characters will fire arrow after arrow into the dirt without hitting the monsters. Spell casters aren’t as easily confused, but put a pillar between them and the main combat, and they will put a lot of magical energy into the stone instead of stepping one foot to the left to get a better shot.

These are minor complaints, but come on, the design team has been working on a game with this type of interface for years now. You would think they would have basic AI problems solved.

When you finish the single player game, which took me about 35 hours doing most of the side quests, then you can jump online and play against others or with others. You can even bring more than just your main character along.

Dungeon Siege II does not really bring anything too terribly new to the genre, but it is a lot of fun to play and should appeal to both RPGers like myself as well as those to like more action oriented games. And it sticks true to the original while freshening itself up a bit as well. It earns a very good four and one half out of five GiN gems to mend onto its favorite swords or armor.