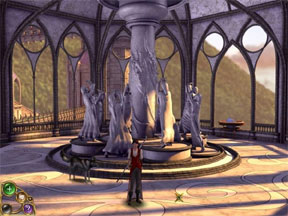 One might think that it’s a little late to hop on the ‘student in an academy of magic’ wagon that everyone seemed to be jumping on a couple of years ago, when a certain first movie in a series came out in the theaters. Well, it is, so at this point you have to hitch your own wagon. Keepsake does this by taking the genre in new and sometimes unexpected directions.

You take on the role of Lydia, a new initiate to the Dragonvale Academy, to which you are going to study magic with your childhood friend Celeste, whose father Nathaniel is the Director of the Academy. Unfortunately, she is not there to meet you where she had promised in her letter, and you find the doll you had given her as a keepsake when she cast a friendship ritual back when you both were young. Soon you discover that the school is deserted, except for a talking wolf you find locked in a cupboard.

The wolf’s says his name is Zak, and he claims to be a mighty dragon that some students transformed into a wolf as a trick, and then locked him in the cupboard. He follows you around, and gives sometimes helpful information about the school as you wander through it trying to figure out what has happened.

Some of the puzzles you discover are usually variations on some classics, but often cleverly disguised in new forms. For instance, it took me a while to realize that a puzzle with a pair of counterbalanced weights was in actuality a variation on the classic 3-gallon jug/5-gallon jug problem.

The gameplay is rather open, allowing you to go many different places and work on any of several different puzzles in the same stage of the game. However, like most puzzle adventure games, certain locations or puzzles are not accessible until you solve certain other puzzles, or find the appropriate key or component.

I never felt railroaded, as there always seemed to be several things on my plate at any one time, but I was always guided to the conclusion based upon what I had found out concerning the events in the school.

The interface is a fixed view on a 3D-modelled scene, where you click on where you want Lydia to go or with what you want her to interact. Sometimes it is hard to find the thing you need to click on, so you may find yourself slowly passing the mouse over the screen looking for the spot that you know should be there.

The artwork is totally fantastic, with beautiful architecture and stunning detail. The colors and textures are varied throughout the Academy, but manage to keep the same kind of theme. The characters are well rendered, and look quite realistic, although they don’t always move realistically.

The music is pleasant and unobtrusive, but adds little to the experience of seeing these impressively drawn graphics.

The voice acting could have used some help. Some of the actors don’t emote well, and seem to be going through the motions with their roles. The actor who plays Nathaniel in particular is very stilted. He reminded me of Principal Skinner from "The Simpsons," and the fact that he is in charge of the Academy didn’t help things. Unfortunately, the time you have to listen to him the most is at the end, which is set up to be very emotional and dramatic, but his delivery just dragged it down.

Despite its shortcomings, Keepsakes really is a beautiful game, with engaging puzzles and an intriguing storyline. It is definitely worth your time and money, and earns a respectable 4 GiN Gems.