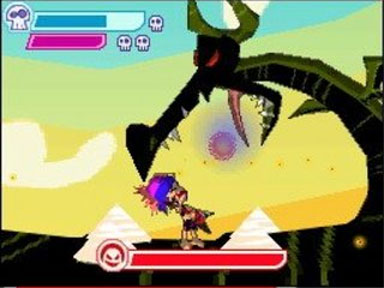 Puffy AmiYumi: The
Genie and The Amp

"Puffy AmiYumi: The Genie and the Amp," which is actually based off the popular divas of a hit Japanese duet and their wacky Cartoon Network series, is about the two crazy rocker chicks named Ami and Yumi who have lost their "mojo" for the music business and are desperately in search of something new to re-spark their musical inspiration. To make matters worse their geeky and demanding manager, Kaz, has locked them inside the studio with some old rusty equipment he purchased from the pawn shop down the street because the guy told him the equipment was "magical" and has no intentions of letting them out until they produce their next hit album.

After some time the rocker duo gets frustrated with their misfortunate "writer’s block" symptoms and one of them decides to relieve a little stress by kicking an old dusty musical "amp" around and upon doing so releases a magical "genie" from within.

A sign that their luck might be about to change, they learn that this powerful genie just so happens to be a big fan of theirs and is eager to help them solve their musical dry spell. Upon granting their wish to find their groove and produce a hit song in exchange for an autograph, the Genie sends them off on a wacky venture across the globe and even to different time periods to acquire musical notes that will aid them in assembling the perfect pop tune.

Before Ami and Yumi get knee-deep into their adventure the Genie sends them to go see an old acquaintance of his who goes by the name Mei Pie. Mei is old and wise and a legendary guitar master full of knowledge and musical talents. Turns out old man Mei has been looking for the Genie to settle an old debt of about 15 yen. Despite the matter, Mei reluctantly teaches Ami and Yumi to learn how to use their instruments as ultimate weapons so that they might be successful in their quest.

One of the coolest things to look forward to anytime you break open a new game on the DS is how the game will use it’s "dual and touch-screen" options. Puffy AmiYumi takes on a different approach to action adventure by allowing players to string together chords on the "virtual guitar" of the lower touch-screen to show their foe who is boss. By sliding the "stylus" over different combinations of guitar strings players can unleash devastating combos upon their enemies and at the same time do it all in style. Rhythm will play a key role in linking together more advanced combos including the ultimate "desperation combo" which will clear the screen of both enemies and fans alike when properly executed. To pull this move off successfully players will have to quickly and flawlessly string together all four musical chords of the virtual guitar to wipe out the opposition.

Once Ami and Yumi grasp their new found attack skills the Genie quickly whisks them off all around through time via their very own time traveling tour bus to collect musical sounds from different eras.

Visually the game doesn’t have much to offer in the way of eye candy, but that can be said about more than a few anime style games out there on the market. The clarity of the game is pretty respectable and there is a healthy mix of various pastel colors used to help keep it true to the animated cartoon itself. Even Ami and Yumi are dressed pretty well for the show as they sport their wild rocker apparel and odd-shaped guitars. What’s not to like visually, however, is the lack of depth within each stage. It’s not enough that there just isn’t much too look at or even comment on graphically, but it’s also the fact that it seems like each stage is painfully dragged out to try and substitute for such a weak lack of depth. Though the game is depicted as a 3D side scroller the environments are so sparse that there’s simply too little interactivity with anything outside of monster battles and so it seems the 3D concept of the game which is designed to really open up exploration is somewhat defeated.

As you advance through the stages you can pick up various bonus items and money left behind by fallen enemies which will help to increase health, wealth, attack power, luck and can even later be used to upgrade Ami and Yumi’s personal attributes. One of the cool things that will help keep players from losing interest in the game are the "mini games" which can be accessed near the end of a stage. In particular are the "Super Fantastic Grab Zone" where you manually operate the classic arcade Crane to try and grab little bonuses and power-up items off the bottom floor and the Vending Machine which allows you to purchase new rocker outfits and stylish guitars to help bring out the "punk" in the heroic duet.

The primary goal of each stage is to collect a specified number of musical notes before you gain access to the main boss. As you progress through each stage you will randomly become surrounded on all sides by "walls of fans" who create a miniature arena around you so they can watch you kick the guitar out of a select group of enemies and sometimes mini bosses. Once you succeeded then the fans give you praise and leave the scene. In most of the stages you have to endure the "fan wall" on at least three different occasions before on the fourth time you’re finally asked to the challenge the main boss of the level. While it’s a cool concept at first, the fan wall battles grow extremely annoying and tiresome after you’ve been through a couple of stages and it just seems like all the fun starts to become a little flaky and stretched out.

Upon defeating a stage boss to acquire their personalized musical notes the rocker duo puts on a mini concert for the fans. Depending on how well you’ve done throughout the level the fans will throw little bonus items onto stage which you can collect while you entertain them. Even though the band always plays the main theme song of the game at the end you surprisingly don’t grow tired of hearing it played over and over again. In fact, you may even find yourself bobbing your head or tapping your foot a time or two. Rule of thumb though: Just make sure no ones around to watch you embarrass yourself.

Once the concert is over, Ami and Yumi head back to the tour bus to take a "Sushi break". Here players get a chance to manually whip up "California rolls", a favorite appetizer of the girls, which mostly consists of raw fish, a random veggie and your choice of any "special ingredient" you may have to collected during the level. Once you’re done playing chef you’ll have to make the tough choice of deciding which girl is going to get to try out your dish as there is only enough sushi for one. Whichever girl you decide to feed will gain bonus points to their various personal attributes depending on what special ingredient you decided to mix in to the meal, while the other girl who got left out of the equation gives you one of those "skulking" looks.

The bottom line? Puffy AmiYumi gets off to a slow start with first impressions. Not only does the game lack serious depth, the overall presentation of background scenery is simply too bland. Thankfully though, the cool outfits and instruments you can acquire from the vending machines throughout each stage for Ami and Yumi help to somewhat come to the "visual aid" of the graphics department so that it doesn’t get a complete thumbs down. Outside of cool attire, it’s pretty fun to play the game using the touch-screen virtual guitar to pull off combos and if some players become a little frustrated with that particular control scheme of the game all of the analog buttons are mapped to each string of the virtual guitar so that less coordinated gamers can still be able to enjoy the game without become frustrated with controls.

Even though the fan walls becoming increasingly annoying and tend to dull the fun after some time, the mini games within each stage are a nice little break away from all the monotony and the concerts at the end of the level are fairly entertaining. Unfortunately, however, there are just to many ups and downs in this gig overall and while I never like to end things on a bland note this game only chalks up a mediocre 3 GiN gems.