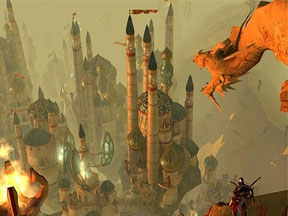 Rise of Nations: Rise of Legends

It has been a long time since I was excited about a real-time strategy game. And that is ironic, because I was not originally supposed to review Rise of Legends but am filling in because of problems the original reviewer was having (of a personal nature, not with the game).

I used to be a huge RTS fan, and was even nationally ranked at one time with both Warcraft and Total Annihilation: Kingdoms. But those days are long ago and the constant copycatting in the RTS area has cooled me to the genre. I was not looking forward to popping Rise into the computer.

That was two weeks ago, and I’ve played nothing else since then. Rise of Legends is the most polished war game I’ve ever experienced. Somehow, the developers at Big Huge Games have found a way to make each and every mission almost completely different from the last. And since the game is played in a series of RTS missions, that is saying a lot.

The storyline of the game is also top notch. In fact, at times it is a little bit confusing as the plot slowly unravels. But it starts easy enough. You play Giacomo, an inventor who creates steam-powered creations like clockwork men and steam cannons for his home country of Miana. It’s really cool to find primitive robots and tanks in an otherwise medieval-type setting.

On a mission with his brother to retrieve an interesting artifact that supposedly fell from the sky, he is ambushed by The Doge, the ruler of a rival nation that also relies on technology. Although Giacomo survives the attack, his brother is killed. Taking over the reigns of leadership, Giacomo raises an army and goes after The Doge.

This brings up the one turn-based part of Legends. You will see a large strategic map of your current location. Your army is represented by a statue of Giacomo. Rival armies have their own statues. Besides moving Giacomo around on the map, you can hold your mouse over a province to learn a little bit about it. On this map you also build up cities in areas that you control, spend points improving your hero and research technology to improve your army. There are limited resources, so you need to be choosy about how you advance. But there are more than enough choices to configure your troops to your play style. You also move your army on this screen.

This does bring up one minor gripe about Legends. In the previous game in the series, Rise of Nations, you could field multiple armies, using some for defense and some for offense. Here you just have your main army, so the strategic choices are rather limited. Also, you don’t get to defend a province when it is attacked. If you happen to have built a military district there, you will repulse the invasion but the district will be destroyed. If you lose all the military districts, you will loose that part of the map. I would prefer to be able to fight a defensive battle when attacked instead of leaving it up to a fairly basic numbers system.

Ok, when you move into a neutral or enemy province, be ready. Instead of the standard "go beat up the bad guys" situation, you are likely going to be presented with a unique scenario. Perhaps the main town there joins you right away, but only because their clockwork miners have all turned against them and are tearing the place up, meaning you will need to deal with the mess. Or they might have a city that is under siege from bandits or monsters and need your help to defend them for several minutes before they will join. Or you might be dropped into a RPG-like mission with your hero exploring the map and trying to achieve some odd goal with limited resources. It’s almost always a surprise, which keeps the game interesting.

And just when you are getting used to technology units, the game will throw another curve at you. There are three campaigns in the single player game. You can play subsequent ones after completing the ones before them. But there is a different enemy in each of the three campaigns, and you will be forced to learn how to use and train up different units. For example, in the second campaign, you go into a vast desert with sand that clogs up the gears on your clockwork troops.

Without technology, you must cultivate more magical troops, which happen to match with the troops you are fighting. So it would seem that Legends is a battle of technology and magic, but in fact, there is a third enemy that will threaten both. Anyway, I’ve said enough already. Suffice to say the game’s single player campaigns are well constructed.

Graphically, the game is gorgeous. Even the many cutscenes are mostly made from the game engine itself. And why not, if it looks that good? Each unit is extremely well detailed right down to the curling smoke that emits from some of the steam-powered units. Dragons gracefully float across the screen, occasionally letting out a roar just to let you know they are still there, teeming with raw power that is always ready to be released.

And that speaks to the sound quality of the game as well. The sounds that each unit makes are no less detailed than the graphics. Couple this with a good soundtrack that keeps you in the atmosphere of the game and you have a great overall experience.

On the negative side, the enemy AI and some pathfinding issues could have been a bit better. Especially when dealing with large armies, several units often get stuck behind a tree or off to one side of a narrow path and require shepherding back to rejoin the main group. The enemy AI is a bit too suicidal as well. Once you establish a line of defense with gun turrets and advanced research buildings like bunkers, the bad guys seem unable to do anything other than run a steady stream of troops into your meat grinder. Granted, setting one up is a bit difficult, but it would be nice if the enemy would employ a few surprises, or at least some more flanking skills. I’m willing to forgive this because I am a bit of a turtle player, so I like building fortresses before striking out onto the map. And remember, not every scenario is going to be a straight fight, so your tactics will change and at least the enemy AI is setup initially to take advantage of the terrain and general state of affairs.

Multiplayer offers a true challenge because you never know what a human will try and thankfully there is a robust community playing Legends online. Finding someone to play with is no chore at all. And although this is a minor plus, the game automatically patches itself when needed, so anyone with a good Internet connection will not have to worry about playing with the latest version.

Legends will get your blood flowing. Not only is it a lot of fun to play, but actually has a good story that will also keep you coming back. Unless something radically better comes along in the last few months of 2006, I think we are looking at the RTS game of the year. Conquering a few minor glitches, it earns a perfect 5 GiN Gem overall score.