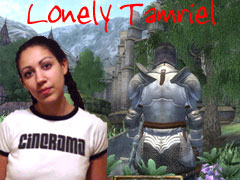 Oblivion was the first truly great game that came out for Xbox 360, and it couldn't come soon enough frankly. After a summer spent in the great outdoors and the sunshine IRL, I finally received Oblivion for my birthday, which led me nicely into autumn. With short days and long winter nights ahead of me, Oblivion looks set to see me through until the first days of next spring. I'm trying not to think about Gears of War, Viva PiÃ±ata and Zelda on Wii because they may tempt me from my path.

At first glance, Oblivion looks bloody lovely. The textures, the lighting, landscapes and even the little Germanic towns; it all looks amazing. The character gen doesn't disappoint either. The depth and level of tinkering allowed meant that it took me at least two hours to create my first character. Now, two hours is the sign of a good character generation system. Although, they needed to include more hair styles if you ask me.

Once in the game, the initial introductory quest is the bog standard kill rat, slay orc fare. But once that is completed you are born into the world, and the world is good. But after just a short time, I became a little perturbed dear play chums. I wandered around and couldn't quite put my finger on what was wrong until I entered the first main city.

The first symptom was a sense of loneliness. The second symptom was a sense of isolation and the third was an overwhelming feeling of solitary confinement. My problem, dear readers, was that I was suffering from MMO syndrome. This is a most ghastly condition where an individual cannot play a single-player RPG without feeling bewildered and alone.

I would walk around the city hoping against vain hope that somebody would spontaneously run up to me and start talking. Passers by would sometimes turn their heads in my direction and wish me a good day, but it wasn't quite the same. Then I'd engage them in conversation and after five minutes all chit chat was exhausted. Even if I returned to them an hour later they'd only repeat things. Oh for some human contact, I thought.

It's not so bad during the day because all the NPCs are wandering around the streets going about their business. However, once night falls, the cobbled lanes are deserted, except for the odd city guard. Sometimes I'd frequent inns and taverns just to listen to their idle banter, but soon even that became repetitive. And even during the day the streets were never busy and bustling, just mildly populated.

The whole world resembled that episode of Star Trek where the crew are trapped in a Wild West town that turns out to be just an illusion. I was struck by the fact that the only characters populating this world with me were mindless automaton, blindly carrying out their functions in order to guide me on my way.

It all felt a bit futile to play a game where I was so alone that nobody could share my booty or swap weapons with me. There was nobody to talk to, in fact even if there was; I had no way of communicating with them.

So, I got out of the city and then things seemed better. I could wander through the countryside and walk through temple ruins to my heart's content. I didn't need to find a group and I didn't have to put up with spam breaking my illusion with things like "dude these new flying skills totally rock" or "whoot! Level 26 at last I get my magic bots, I mean ‘boots'" and such like.

There's a lot to be said for a bit of soloing in a solo world. It took me a while to get back into this particular groove, but if any game can do it, it's Oblivion. But I still can't help thinking; if Elder Scrolls was online it would totally rock!