Over the past couple years, Wizards of the Coast has been really beefing up its Dungeons and Dragons offerings with both new content, and revising older adventures from the 1970s and 80s with refreshed covers and updated rules. What was once almost a forgotten property is now fully rekindled and supporting of the robust role-playing community.

Just in the past year or so, we have reviewed Dungeon and Dragons content in the form of the revamped Eberron campaign setting, comical offerings like the Rick and Morty module, a trip to both one of our favorite cities and also hell in Baldur’s Gate: Descent Into Avernus, a revision of classic modules in Ghosts of Saltmarsh and even a Betrayal at Baldur’s Gate board game modeled after the Betrayal at House on the Hill games. And that is just to name a few titles. Good old Dungeons and Dragons is fully supported once more.

We may take the support for our beloved RPG game for granted today, but back in 2014, its fate was far from certain. That is when Wizards put out the first couple, brand new modules for the classic game after obtaining the license to it. Hoard of the Dragon Queen and Rise of Tiamat came out in large, multi-page books that were completely self-contained adventure modules. It’s a format that we would come to expect in later years, but it was new at the time. 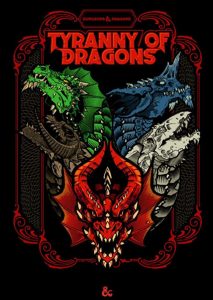 The modules followed the format where a party of low-level or even first level adventurers begin their careers, normally by responding to some typical call for help or an invitation to check out a local dungeon or solve some problem in a back-woods hamlet. This inevitably leads to a world-shattering conspiracy, and the party finds themselves fighting in increasingly difficult circumstances and leveling up as they gain experience. Most of the time, parties are anywhere from levels 10 to 18 by the time they are done.

In terms of adventure quality, both Hoard of the Dragon Queen and Rise of Tiamat were good, perhaps not as great as some of the titles that would follow. They didn’t tie their stories and adventures together quite as tightly as some modules, meaning dungeon masters might have to work a little bit to keep their players on the right path. But the story itself is good, and of course epic, with the Cult of the Dragon trying to bring Tiamat back to the world of Faerun.

[amazon asin=0786966971&text=Take on Tiamat in the Dungeons and Dragons Tyranny of Dragons adventure with a copy from Amazon!]

Unlike future modules where everything was together in one package, Hoard of the Dragon Queen and Rise of Tiamat were sold separately. That is probably one of the main reasons that Wizards decided to combine the two into a single adventure called Tyranny of Dragons. With this 224-page tome, DMs can take their party all the way from the original skirmish at the village of Greenest all the way to the final confrontation with the cult. And players can start at first level and rise all the way up to level 16 without interruption.

For this special edition, the cover art was redone by Hydro74, which looks pretty cool in their distinctive style. A few points in the game itself have also been given minor touchups, supposedly based on player feedback to make the adventure a bit more playable. I wasn’t able to run my group through the entire adventure a second time, so I don’t know how effective this was, though I did note that a couple things my party complained about have been addressed, so that’s a good sign. There are also a few resources available that were previously only posted online, and some new concept art.

If you have already played Hoard of the Dragon Queen and Rise of Tiamat, then you probably wont get too much extra out of Tyranny of Dragons. But if your party hasn’t tackled this one, then the newly released Tyranny of Dragons is a perfect excuse to start a brilliant new campaign. Afterall, dragons are one half of the Dungeons and Dragons name, and Rise of Tiamat has got all kinds of them just waiting to take a bite out of your best crew.